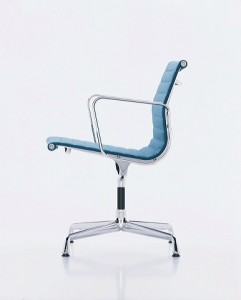 EA 107 by Charles and Ray Eames for Vitra

In the past week three independent events have occurred which fuse together in one important tale.

Firstly, while visiting a student flat in Dresden the (smow)boss noticed an obviously well used, but functioning chair reminiscent of the EA 107 by Charles and Ray Eames for Vitra. Despite assuming it to be a copy – student flat, Dresden, etc… – his professional curiosity got the better of him and  thought he’d better check .. and Lo and Behold it was an original EA 107 by Charles and Ray Eames from Vitra

The lucky recipient had inherited it from his grandfather, without ever knowing it’s real value; although fully appreciating the sitting comfort. 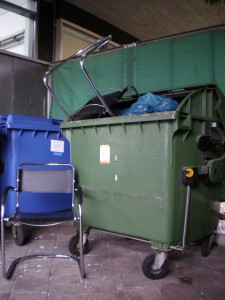 Contrast that scene with what greeted us the other morning as we walked past a prominent office block complex here in Leipzig: two obvious copies of the S 33 by Mart Stam from Thonet in the rubbish bins

We’ll save you the pictures of the cracked and sagging faux leather seating, but the distressing point is that some company thought they could save a few euros by buying cheap on-line … and now have no chairs.

And the money is also long since gone.

This week also came the written judgement from Oberlandesgericht Düsseldorf in the case of Thonet against an Italian producer of Mart Stam copies, in particular the S 43 cantilever chair. 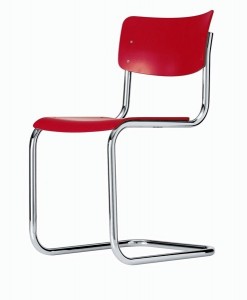 The court decided that being a work of visual art the S 43 is still protected by copyright, and, as such, can only be produced by the licence holder; namely, Thonet.
Aside from this judicial confirmation that Mart Stam’s work is art, the judges decicison should also further protect consumers from low quality copies.

For those whose disposed chairs we found, it’s all a little late, but for those who are considering investing in designer furniture the lessons are clear.

With an original licensed product, yes you pay a little more up front but with the extra money comes the peace of mind that rather than finding it’s way into the bin, the article will find it’s way to the next generation. And possibly also the next.