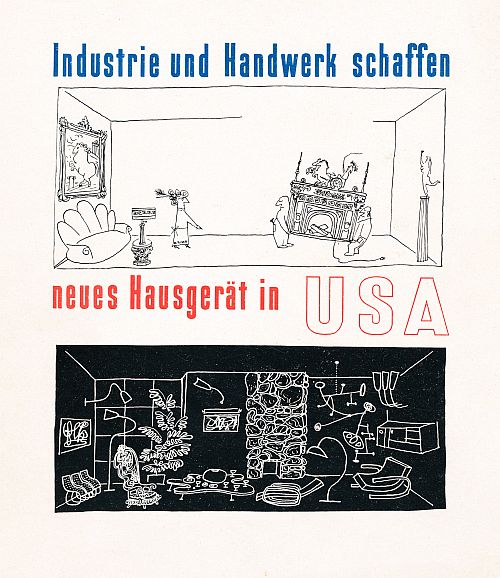 Design for Use, USA. The cover of Alexander Girard's catalogue.

And no relation of Teddy or Robert.

Still cheered us up.

Organised by the New York Museum of Modern Art under the title “Design for Use, USA”, the exhibition featured a cross section of American domestic design.

All presented in an exhibition concept and catalogue designed by Alexander Girard.

Aside from the very appetising list of objects displayed, the exhibition was and is interesting for a number of reasons.

Firstly because it took place some two years before Willi and Erika Fehlbaum made their fateful trip to New York; from which they returned with the seeds of Vitra in their hand luggage.

Imagine. Just for a second. If someone in Stuttgart had shown a little more entrepreneurial spirit.

Which is an important lesson in grabbing the opportunity when it presents itself.

In her article “The “Advance” of American Postwar Design in Europe: MoMA and the Design for Use, USA Exhibition 1951–1953”1 Gay Mcdonald argues that the whole exercise was simply concerned with promoting Americana in Europe in the context of the Marshall Plan. And when you read the original 1951 MoMa press release2 its hard to disagree.

As far as we’re aware Americans have always been obsessed with exporting their culture to the rest of the world. Be it blue jeans, hamburgers or oppressive security concepts in the name of freedom.

And of course they famously invented their own sports rather than assimilate those from other cultures.

But we trust that most Europeans, and indeed most Americans, are intelligent enough to form their own conclusions and opinions.

And so regardless of the motives, we find the exhibition was the right thing at the right time. At that period America, untouched by the war, was the motor of world product design. And MoMa was unquestionably the institution playing the biggest role in promoting American design innovation.

In 1951 most of Europe was busy re-building and was greatly in need of quick, efficient housing and furnishing solutions.

Ergo, let MoMa bring the best America has to offer to Europe. And let us take inspiration from those bits we like. 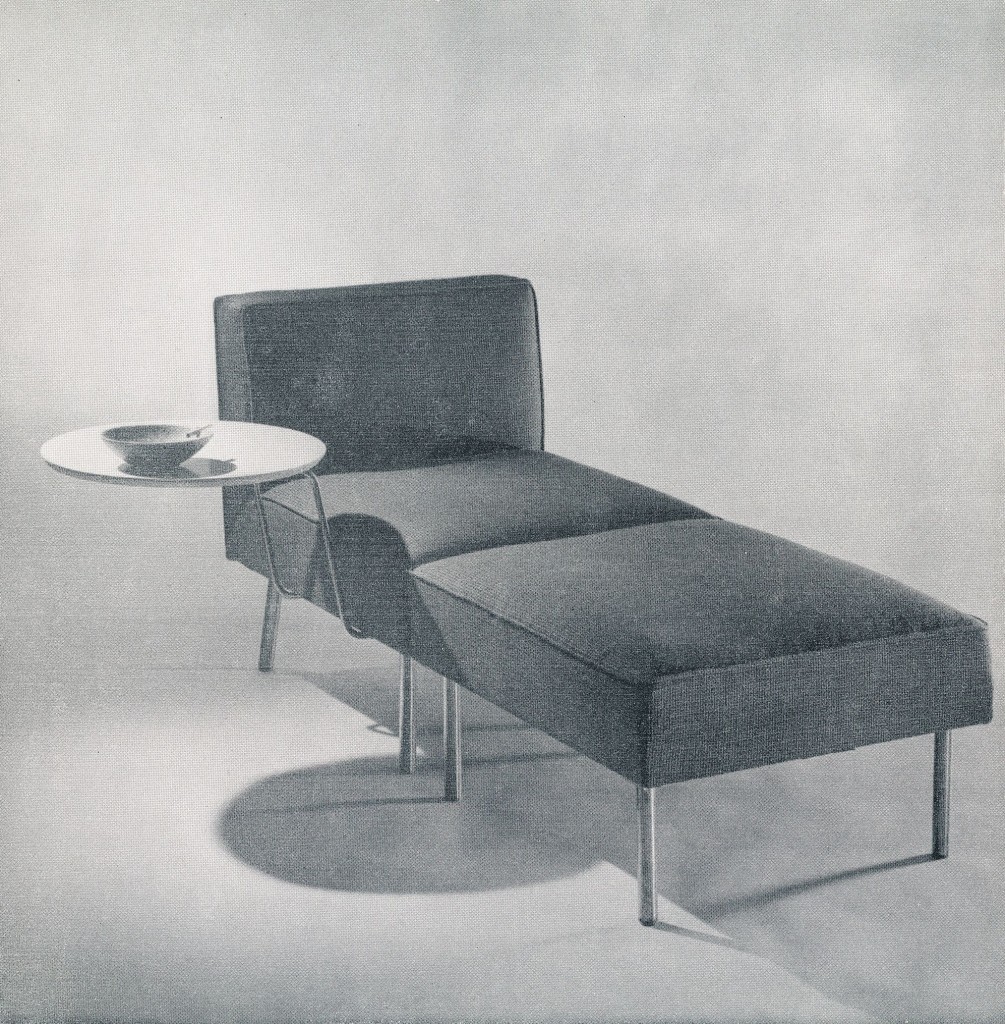 "Upholstered chair" by George Nelson for Herman Miller from the Design for Use, USA catalogue

Gay Mcdonald quotes a source as stating that some 60,000 visitors attended the exhibition. That may not sound much; but one must remember that it was 1951. There were no budget airlines offering 20p flights to Stuttgart. And also a lot less “design industry”.

The aforementioned Vitra was still an inconsequential shop fitting company in Basel.

What is sadly not documented is who went and what they took away with them.

For just as every important and influential Manchester band of the late 1970s and early-to-mid 1980s can trace their origins back to 4th June 1976 and the Sex Pistols concert at the Lesser Free Trade Hall; we romantically hope that “Design for Use, USA” shaped European furniture design of the 50s and 60s.

However, without the documentation one can only conject on the long-term effect that the exhibition had on those who visited.

After Stuttgart the exhibition continued through Europe with stops in London, Paris, Zürich and the Milan Triennale.

The fact that no-one took the opportunity to organise European production licenses indicating that, maybe, it was all just too new. Too different.

However, it conceivably began a sensitising process that paved the way for Vitra to successfully launch the works of Eames, Nelson, Noguchi et al in 1957.

And indeed for Wilde + Spieth to successfully market Egon Eiermann’s chairs. Egon Eiermann began publicly working towards mass market furniture when he participated in the “Wie Wohnen ?” exhibition that took place in Stuttgart and Karlsruhe in 1949/50. Many of his designs however originated from the mid-1940s, and Eiermann was undoubtedly influenced by what he was reading from America in the specialist publications of the time.

We’re not saying he was copying. But Eiermann and Eames were certainly researching and experimenting in similar directions. Eames albeit a little quicker and more successfully.

Yet in 1951, only few industry figures would have been aware of this, and indeed in 1951 Eiermann’s SE 3 (the current SE 42),  allegedly, only sold some 153 times. And principally to architects. 3 Over the next decade however not only did the sales figure dramatically improve; but Eiermann’s chair designs – with their undeniable “Hint of Eames” – advanced to become European design classics.

But again we can’t actually prove that Design for Use, USA helped. 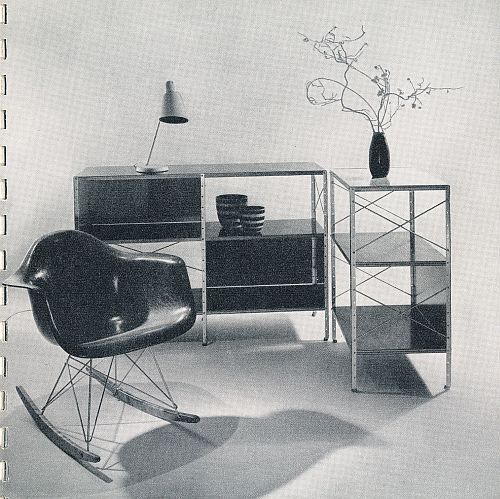 A RAR and and ESU Bookcase by Charles and Ray Eames as depicted in the Design for Use, USA catalogue

In addition to paving the way for a new understanding of home furnishings, “Design for Use, USA” also introduced Europe to new technological and business model initiatives; we started moulding plastics and established designer furniture producers in the style of Hermann Miller. But we did it in European way.

We, for example, have no confirmed information that Arne Jacobsen attended the exhibition; but undeniable is how passionately he embraced the use of synthetic materials appearing on the market throughout the 1950s and 60s. And how expertly he fused them with the best traditions of Danish handwork. The Egg and Swan perhaps standing as the best examples.

And so while we admittedly lack the documentation, there is more than enough circumstantial evidence to indicate that without “Design for Use, USA”  it would have taken the European furniture industry a little longer to find its feet.

And with potentially less interesting products.

What we can’t predict however is how the Kennedy dynasty would look today if they had concentrated on pickle spoon design rather than politics.

The Slinky by Richard T James: was also part of the Design for Use, USA exhibition