We’re fairly certain most museum curators aren’t inherently nocturnal, it is however noticeable that the longer the nights become, the more activity one registers in museums globally. And so with autumn slowly giving way to winter it should perhaps come as little surprise that October 2015 offers such a richness of new design and architecture exhibitions……

An important role in the (hi)story of contemporary design was unquestionably that played by the Art Nouveau movement of the late 19th/early 20th century: for although only existing for a relatively brief period, Art Nouveau moved aesthetic ideas on from the romantic historicism of the 19th century and inspired characters such as Henry van der Velde, Peter Behrens or Eliel Saarinen to question accepted norms, propose alternatives and thus pave the way for modernism. For their major review of Art Nouveau the Museum für Kunst und Gewerbe Hamburg argue that as much as its historical relevance, Art Nouveau also has a contemporary relevance: issues such as, for example, the conditions under which goods are produced, relative benefits of new materials or ecological considerations in production and distribution being just as relevant then as now. Promising some 200+ objects from international creatives as varied as Emile Gallé, Richard Riemerschmid, William Morris or Louis C. Tiffany, Art Nouveau The Great Utopia in addition aims to present the movement as much as one of social reform as aesthetic change and thus provide a new perspective on a familiar topic

A chair by Karl Gräser in the style of his work for the Monte Verità Reform Colony, Ascona, Italy (ca. 1910)

According to the exhibition curators “Ó” is Irish for the preposition “from”. As far as we are aware it is also the Irish for the expression “Oh!” The curators have chosen the title to refer to the fact the presented works originate from Ireland. We suspect visitors may use it the expressive sense of “Oh! Look! Ireland can do more than Aran jumpers and carved walking sticks!” Presenting works by some 20 contemporary Irish creatives Ó promises to be one of the highlights of the Design & Crafts Council of Ireland’s self-proclaimed “Irish Design 2015” programme and promises a mix of genres including furniture, ceramics, glass and textiles. But for all it promises an impression of contemporary Irish design beyond the accepted stout and craic clichés.

The World of Charles and Ray Eames at the Barbican Art Gallery, London, UK

“Bringing together over 380 works.” That was the phrase that primarily grabbed our attention in the Barbican Art Gallery’s announcement of their forthcoming Eames retrospective. Over 380. A figure that strikingly demonstrates the scope of Charles and Ray Eames output and the high productivity of the Eames Office. What it sadly doesn’t do is confirm if the exhibition will provide insights into the creativity of Charles and Ray Eames that go beyond the familiar. Or simply repeat what is already available. For despite the central role the pair played in the development of 20th century design, the philosophical base that underscored much of their work and the continuing popularity of their designs, the story of Charles and Ray Eames is a remarkably narrow narrative. It may be that there is genuinely no more to be told. If there is, the Barbican exhibition would appear to be an excellent opportunity to present it.

The World of Charles and Ray Eames opens at the Barbican Art Gallery, Silk St, London on Wednesday October 21st and runs until Sunday February 14th 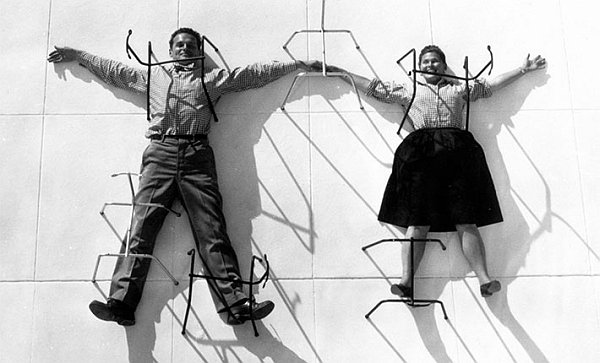 Charles and Ray Eames. Designers trapped by their chairs. There is a metaphor in there somewhere…..

There is something very agreeable about the way Ronan and Erwan Bouroullec pop up in the most unexpected places with the most unexpected projects. Not least because, and as a general rule, the more unexpected the location and the more unexpected the project the greater the chance of experiencing something that expresses the true nature of the Bouroullec’s understanding of design – rather than simply an object created in response to a commercial brief. Ronan and Erwan Bouroullec have no real need to create an original installation of 17 partitions for the Tel Aviv Museum of Art. By which we mean no disrespect to the Tel Aviv Museum of Art, far from it; however, as an institution it is outside any normal field of reference one would ascribe to the Bouroullecs. That they have chosen to accept the commission, and have promised a series of modular partition elements crafted from a range of materials and linked by a specially developed joint and hanging system, bodes very well. Very, very, well indeed. 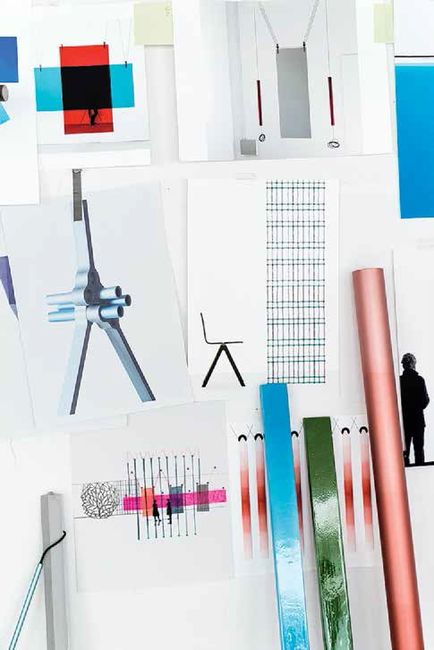 Jacob A. Riis: Revealing New York’s Other Half at the Museum of the City of New York, USA

With his 1890 book “How the Other Half Lives” Jacob A. Riis not only exposed the brutal reality of life in New York’s slums but also ably demonstrated that as a general rule slums exist through bad planning. Born in Denmark Jacob A. Riis emigrated to America in 1870 and after trying his hands at various jobs became a police reporter for the New York Tribune, accompanying officers, and venturing alone, into some of the worst, darkest, slums the new world had to offer. With his camera permanently at hand Riis diligently documented the conditions he encountered and the squalor in which the, largely migrant communities, lived. In addition to “How the Other Half Lives” Riis published numerous texts and also advised Theodore Roosevelt, initially in his role as President of the New York City Police Commissioners and subsequently as US President, and while Riis’s work didn’t directly lead to any major infrastructural changes it did make the reality in the slums visible and unavoidable to even the most ardent sceptic, and thus unquestionably hastened the speed with which the authorities introduced changes. In what the Museum of the City of New York claim is the first retrospective of Jacob A. Riis’s work since 1947 Revealing New York’s Other Half promises not only a presentation Riis’s photographs but works by his contemporaries in addition to original texts, journals and letters and thus promises to be an important repetition of a very simple truth: as a general rule slums exist through bad planning.

Jacob A. Riis: Revealing New York’s Other Half opens at the Museum of the City of New York, 1220 Fifth Avenue (at 103rd Street), New York, NY 10029 on Wednesday October 14th and runs until Sunday March 20th. 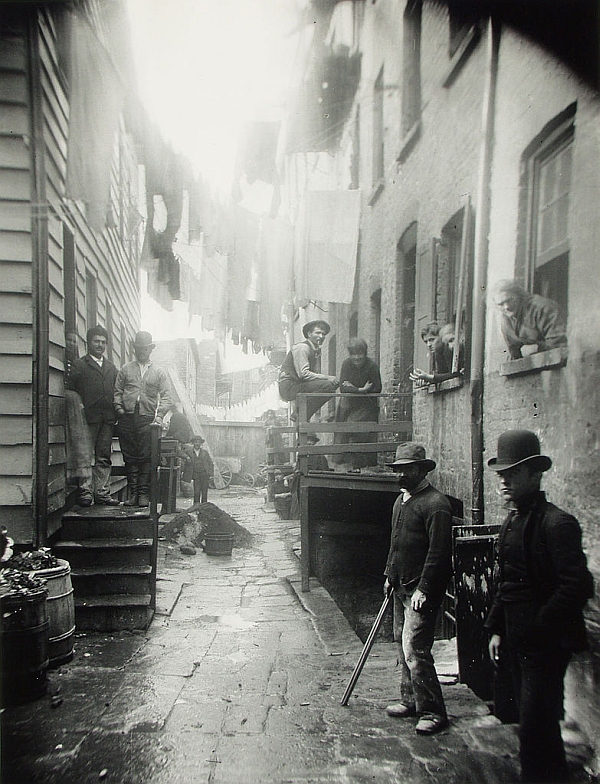