As we noted in our post from the 2015 Garden Unique Youngstars competition, the contemporary outdoor furniture market is a largely forgotten world as far as quality design is concerned. And as we also noted, it needn’t be. At IMM Cologne 2016 Thonet are presenting with the new All Seasons collection their alternative vision.

The (hi)story of Thonet furniture is, as with the wider (hi)story of furniture design, essentially one of indoor furniture. Although not exclusively so. Thonet’s first foray out of doors came in 1935 with the B 33 g by Mart Stam: essentially Stam’s classic B 33 cantilever chair the “g” stood for Garten – Garden – and the object featured slats of beech in place of the more familiar solid plywood seat and backrest. Post war, rising financial standards combined with improved housing provision and changing social behaviour encouraged Thonet to release in 1952 the TF 82 folding garden chair by Kurt Felkel before in 1955 launching a series of garden chairs by Günther Eberle, none of which survived into the 1960s. In 1959 Thonet launched the ST 458 garden chair and ST 459 garden armchair by Hanno von Gustedt, chairs which as with those by Günther Eberle were only to remain the briefest of periods in production and which were to be, effectively, the company’s last outdoor chairs until in 1999 a re-edition of Stam’s B 33 g, renamed S 40, represented Thonet’s most recent foray into the world of outdoor furniture.

Not that the new All Seasons collection is a purely outdoor collection, as the name implies, and as everyone at Thonet is at great pains to point out, underscore and generally impress upon you: the collection is intended for “all seasons”, indoors and out. That which brings comfort and style to balmy spring/summer evenings in the garden, terrace or balcony, can be brought indoors in autumn and winter to bring comfort and style to cold afternoons and misty Sunday mornings in the living room, kitchen, conservatory, wherever.

And that the All Seasons chairs can be used indoors and out is not just because the Thonet sales team tell you they can, but because the All Seasons collection presents new versions of the S 33, S 34, S 35 & S 533 chairs – established Thonet classics and all originally intended for indoor domestic use. 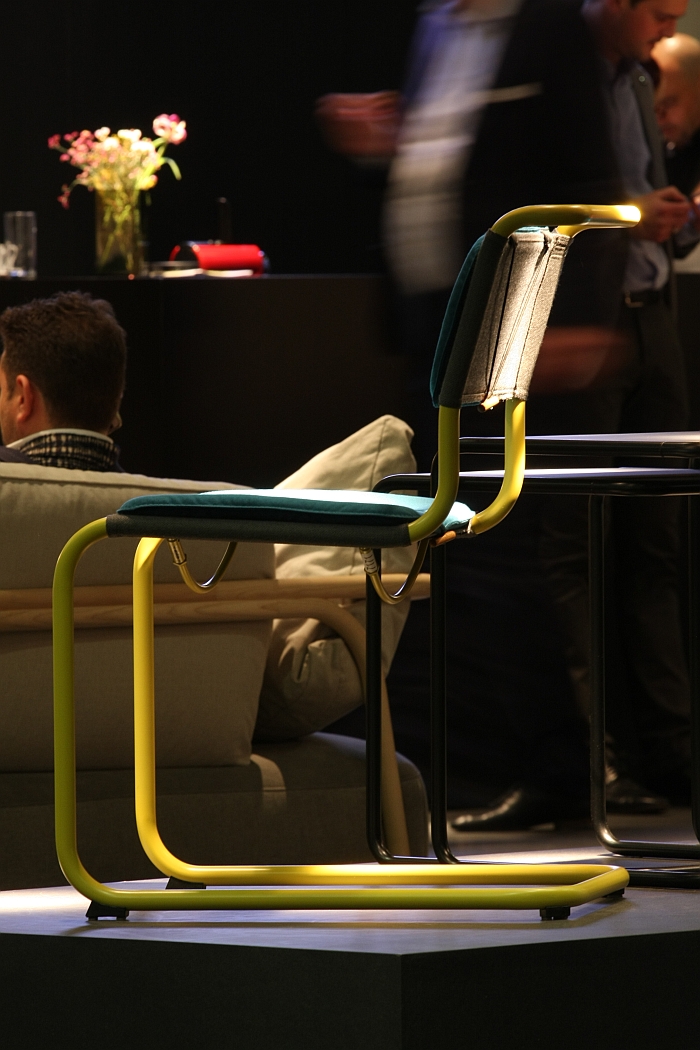 S 33 N, from the Thonet All Seasons Collection, as seen at IMM Cologne 2016

The decision to re-work established classics for the All Seasons collection was not, as one could easily assume, a decision inspired by Mart Stam’s reworking of his B 33, but rather the result of a methodical analysis of status quo and challenge.

“Initially we undertook a research project on outdoor furniture” explains Miriam Püttner from the Thonet Design Team and project leader for the All Seasons collection, “in addition to looking at what was currently available and what already existed in the Thonet archive we also constructed numerous scenarios as to where one uses outdoor furniture and considered, for example, if we should develop single products or if a family of objects was a more sensible solution.” The results of this research project encompassed some 120 pages and came to the conclusion that the company should begin its new foray into outdoor furniture – yes, yes we know, all seasons furniture, but as objects they will, we feel, primarily be of interest for outdoor use – should start with a family of bent tubular steel classics, not least because they are objects with which many are familiar, which enjoy a large degree of popularity and which over the decades have proven their value in a range of settings.

“The initial task”, explains Miriam Püttner, “was to investigate which classics were potentially relevant, which were suitable for adaptation, in which context it was important for me that we made no structural changes to the pieces. The decision for the S 33, S 34, S 35 & S 533 was ultimately made on the basis that they are self-contained in their construction, with, for example, the S 32 the frame requires the wooden backrest for its stability, with the All Seasons collection we have exclusively steel tube chairs with a woven synthetic mesh for backrest and seat.” 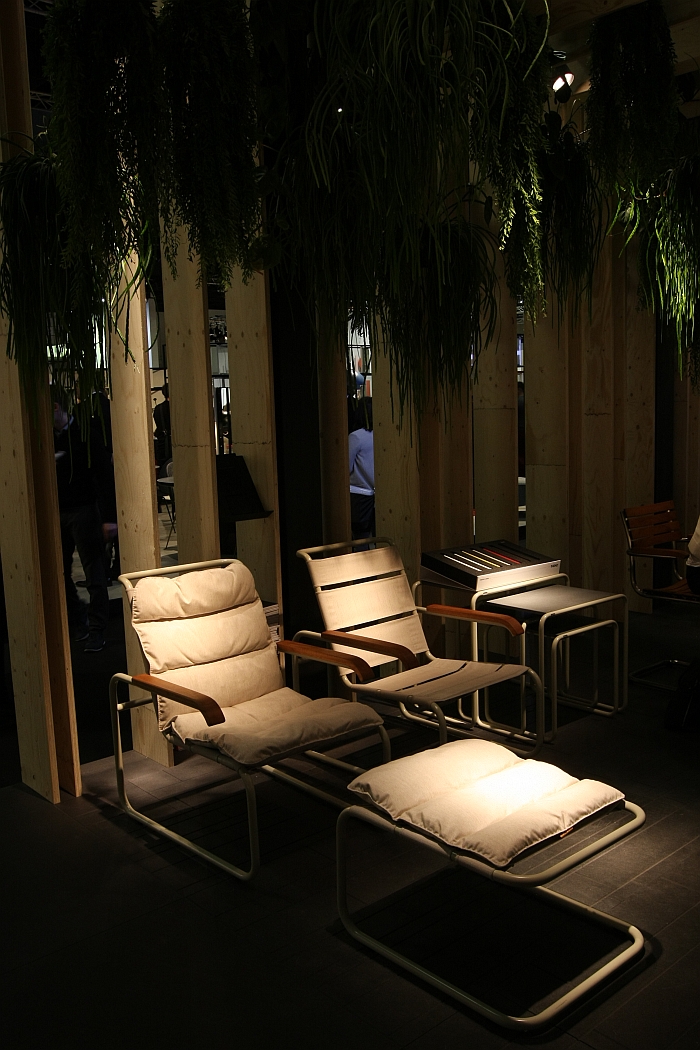 S 35 N with, and without cushions, from the Thonet All Seasons Collection, as seen at IMM Cologne 2016

Just as the decision for the classics came as a result of sober analysis so to the decision for the Batyline mesh seats and backrest. As a material Batyline is not only widely used in the furniture industry but also in construction as a façade covering; the decision to use it in the Thonet All Seasons collection being made on account of its durability, surface stability, UV and salt water resistance, factors which make it suitable for a wide range of outdoor uses, including yachts. Or perhaps more realistically, for sea front verandas. Similarly the specially developed ThonetProtect system via which the steel tubing is subjected to a multi-stage coating process, provides a level of protection akin to that offered by contemporary automotive lacquer, ensures a universality in the chairs use and deployment. Including yachts. In addition the selected Batyline collection offers a wide range of colour options, both bright and more reserved, colours which compliment and contrast nicely with the colour options for the frames, which aid and abet the indoor/outdoor usability and which as Miriam Püttner explains formed a central component of her deliberations on the direction the project was to take, “for me it was important to create for Thonet a new, fresh concept, and in context of furniture intended for outdoor use, colour plays a crucial role. They must be so selected and coordinated that they fit into the environment, function harmoniously together and also represent the brand.”

In addition to the chairs the Thonet All Seasons collection also includes new versions of the B 9, B 97 and S 1040 tables, including the option of a concrete table top; an option which not only provides a nice material contrast to the steel frames but much more, and being as it is a material which develops a patina and individual character through use, allows for outdoor furniture objects which will age and mature with you, and your kids, and their kids, their kids kids, etc, etc, etc… The Thonet All Seasons collection being, as with all Thonet furniture, objects for generations not seasons. 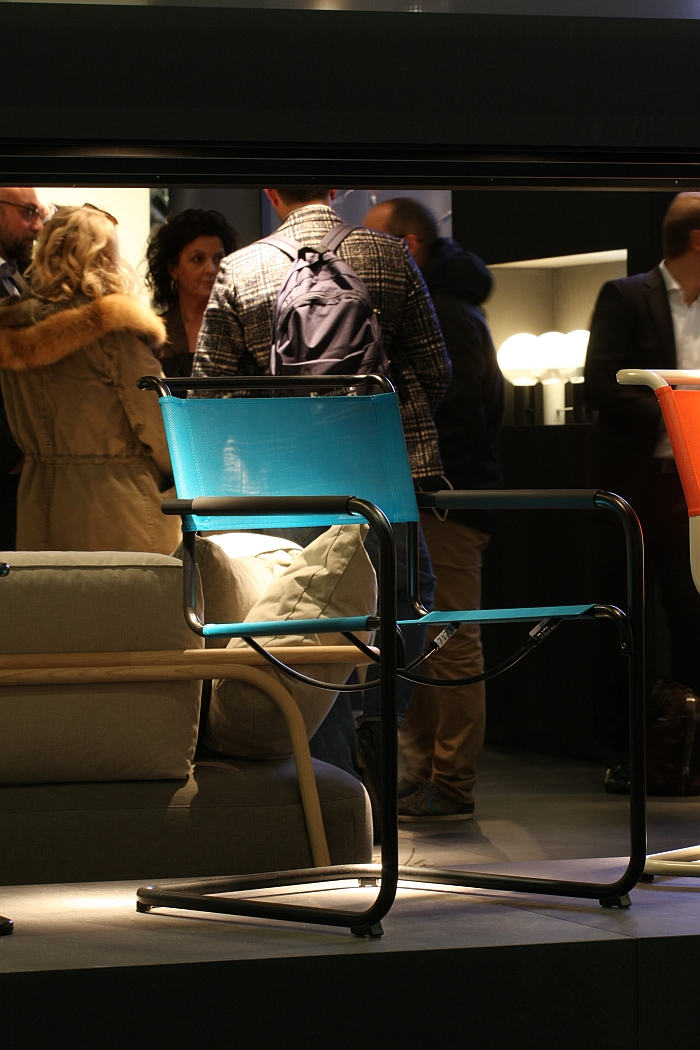 S 34 N, from the Thonet All Seasons Collection, as seen at IMM Cologne 2016

That the new All Seasons collection has been developed in-house is very much in the tradition of Thonet garden furniture: the aforementioned Günther Eberle & Hanno von Gustedt both belonged, indeed led, the Thonet product development team, and both helped the company recover following the upheavals of the war years. Miriam Püttner is a more recent addition to the Thonet Design Team, having joined in 2015 following her graduation from the Hochschule Coburg; the All Seasons collection is the first project for which Miriam was responsible, which of course raises the question how is it as a young, relatively inexperienced, designer to be asked to re-work such established design classics by the likes of Breuer, Stam or Mies van der Rohe?

“At the beginning it was very difficult for me, they are classic designs, everybody knows them and I was very aware of the fact I can ruin them, I can damage the reputation of the objects and so I had a lot of respect for the commission”, explains Miriam, “however the nature of Thonet is that one has a lot of support, not only here in the design team where we have a lot of experience and where I can gather feedback when required, but also throughout the departments be that the upholstery workshop, the metal workshop or wherever, at Thonet there is a great sense of unity and togetherness and that makes such a job much easier.” 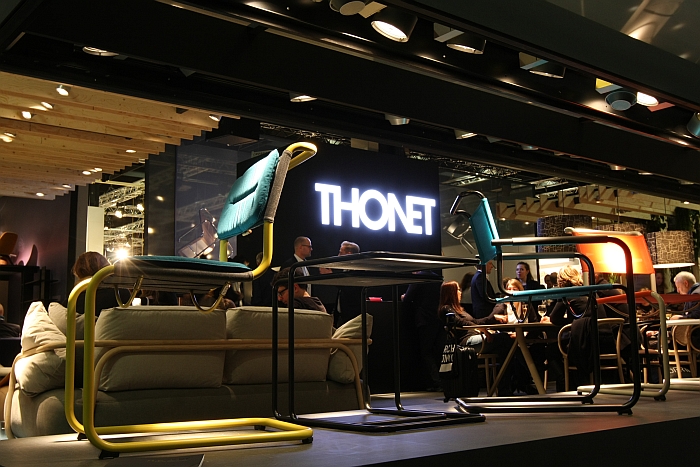 That the job was also made easier thanks to the objects already existing is undeniable, but not self-explanatory.

If we accept that “form follows function” was one of the guiding principles of those men and women who developed the first pieces of steel tube furniture, then we must also accept that “function” is subjective, respective, and very occasionally temporal. With his B 33 g Mart Stam demonstrated that the creation of good, functional, outdoor furniture requires a different design approach than that used to develop good, functional, indoor furniture. And with the All Seasons collection Miriam Püttner and the Thonet Design Team have demonstrated that the creation of good, functional, indoor and/or outdoor furniture requires yet a different approach.

We would concur with Miriam that it is very easy to ruin an object such as the S 33, very, very easy indeed. That the All Seasons collection doesn’t ruin the originals and works so effortlessly both as individual objects and a collection is not just because the objects are familiar but much more because in adapting them for outdoor use Miriam Püttner and the Thonet Design Team have demonstrated a respect for the originals, an understanding of the demands of contemporary furniture use and for all a comprehension of the task they were presented. The All Seasons collection doesn’t do anything revolutionary, but then it didn’t have to, no one was expecting it to redefine outdoor furniture for the 21st century; what it was expected to do was provide a family of contemporary furniture objects that can be used indoor and out, in a range of settings and contexts, and that it does with an effortless charm and grace which adds an extra dimension to the original objects.

Full details on the Thonet All Seasons Collection can be found at www.thonet.de 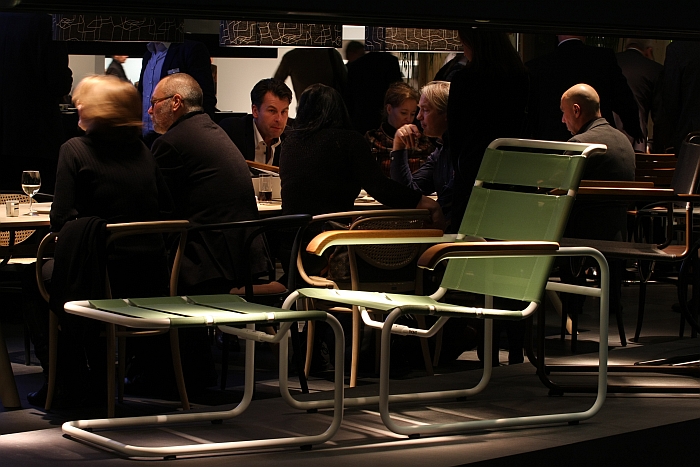