Unbelievably, Eindhoven based design studio Daphna Laurens have never, ever, participated at Salone Satellite, that section of the Milan furniture fair devoted to young design talents.

Even if the works displayed in Milan suggested a maturity beyond their years.

Presented under the title Prototipi Daphna Isaacs and Laurens Manders a.k.a Daphna Laurens used the opportunity presented by their Salone Satellite début to showcase the full spectrum of their creativity and capabilities. Presenting works such as, and amongst others, the Inutile Lights collection created in context of the 2015 Dutch Invertuals’ Body Language exhibition, Stool 01 and Chair 01 created for the 2012 Vienna Design Week Passionswege programme or the Greta Light, an object we first saw as a, more or less, working model in Daphna Laurens’ Eindhoven atelier in 2014, and one which greatly impressed us then and continues to greatly impress today now that it has been further developed and refined, Prototipi perfectly underscored the graphic purity of Daphna Laurens work, how they imbue their work with a tenacious fragility that only very few manage with such consistency and how their work is often more about the development of a shape than product design in the classic sense, yet invariably results in a functional object.

Something very neatly demonstrated by objects such as the Art Deco-esque Cirkel Wall Light or the new Tre Stool. Crafted from powder coated steel Tre unquestionably makes more than a passing formal reference to Sori Yanagi’s 1954 Butterfly Stool; yet whereas the Butterfly began with a (mass) production question and owes its endearing organic form to the chosen plywood moulding process, Tre began with an economic question (the brief called for a design with limited, as in basically no, production costs) and owes its deceptively geometric form to a graphic investigation by Daphna Laurens into simple, easily produceable, stool forms: an investigation which came to the conclusion that a stool need be no more than three lines. Three lines became three components became Tre, all you Italophones will have worked it out by now, and in the subsequent, physical, development phase Daphna Laurens realised a very simple, very intelligent construction principle which allows the two upper seating elements to be stored within the lower base element and thus allowing for a compact parcel size and associated optimised shipping. A solution which very nicely reminds of Charles Eames assertion that the details are not the details, they make the design.

As we believe we’ve said before, quite aside from the aesthetic and functional qualities of Daphna Laurens work, one of the things that has always attracted us to them is the fact they take the conceptual approach of Design Academy Eindhoven and use that to create very practical, logical, almost too obvious, designs which rarely, if ever, betray their conceptual genesis. The result is products which are freed from any temporal, contemporary, context, and thus timeless. And of course ageless.

Full details on Studio Daphna Laurens and their work can be found at: www.daphnalaurens.nl 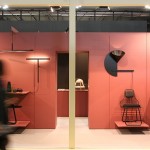 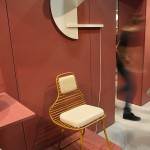 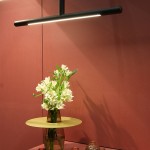 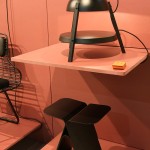 The Tre Stool and the Etagere Light by Studio Daphna Laurens, as seen at Prototipi, Salone Satellite Milan 2016 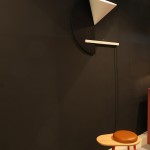 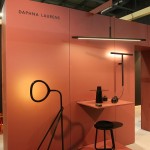