Thus one could imagine songs about office furniture being about as rare as occasions when Caílte mac Rónáin is unable to explain how a particular hill, valley or river in Ireland came by its name. 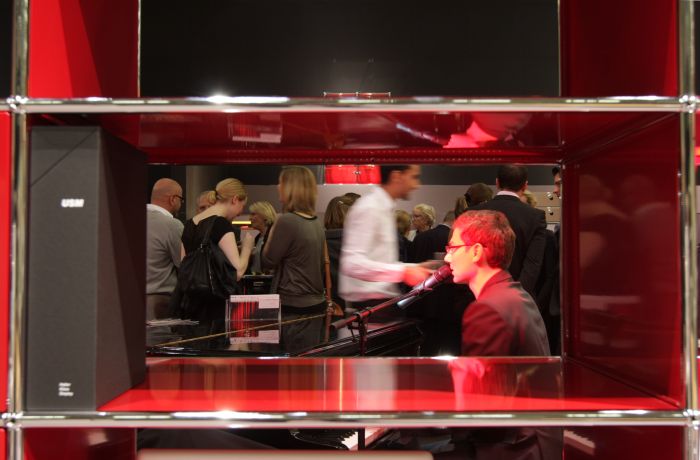 An early prototype of the USM Haller Wine Bar Module….

In many regards a lot of the musical opprobrium for the office can be considered as arising on account of the place the office holds in the development of contemporary society, or put another way, on account of the fact that the office is a relatively new phenomenon, and one whose rise is inextricably linked with the rise of government, administration, industry, banks, insurance, lawyers, marketeers, and thus those turbines of finance, industry and state which define, shackle, mock, contemporary society. And which differentiate it from the truly free society, that society of yore, where offices were unknown, unnecessary. That society to which musicians belong.

The office worker by extrapolation being the one whose job it is to enforce the compromises on which contemporary society is based, the one whose job it is reign in the liberties of the freemen, apply the arbitrary rule of capital and sovereign; but who in doing so compromise themselves the most, limit their own freedoms more than those they seeks to control. Stand, in the musician’s eyes, as a pitiful fool who misunderstands the meaning, the beauty, of life.

Subsequently, office furniture lacks a certain poésie, it’s really hard to get emotive about a height adjustable desk, a conference room chair or a reception counter. Easy to become emotive at such, but not about such.

Which isn’t to say such don’t have their metaphorical, allegorical and figurative.

But why? Why would you do that?

Rather the Radio smow office furniture playlist is about office furniture, our relationship to our office furniture and the myriad ways those objects which define the contemporary office environment also exist as way-markers on society’s development and metaphors for its malaise. Whereby, yes, in the full playlist there are a couple of tunes which pour scorn and ridicule on those who dutifully waste their days in offices when there is all that freedom to be enjoyed.

One consequence of our modern age of hot desking, coworking and similar flexible office arrangements is that a great many office workers no longer have “a desk”, the desk has become an anonymous tool, something interchangeable, universal, essentially characterless.

Yet as Harry Nilsson elegantly reminds us, a personal desk is anything but; rather a desk is an anchor, a place of familiarity, of comfort, a location for bravery but also retreat, a constant in an otherwise uncertain world, almost part of your inner-family. Is society better off without that understanding? Sitting at our Good Old Desk, that which is always there, that to which we return from our various trips, that with which over the years we’ve shared untold fears, joys, dreams and secrets, without it ever passing comment or criticism, we’d argue not. Just as we’d argue, as we always do, and as Harry Nilsson concurs, that desks need drawers. The contemporary absence of desk drawers being another poorly judged mania of our confused age.

Yes, there is the theory that the real reference in Good Old Desk is a higher entity. Harry Nilsson himself may deny such an association, and that despite having started the rumour; however, reading the lyrics in that context they achieve a whole new meaning, and depth, for all the phrase “favorite guest” starts to make more sense. As does the fundamental importance of a personal desk in one’s life.

Where I find my heaven – Gigolo Aunts

Hey Monday mornin’ is only for the brave
And the blood flows through my heart and leaves like sand as I shave
And the wind outside, and the taxi’s ready
And the lonesome hum that comes from my desk lamp is
Where I find my heaven…….

The first thing to say is that if your desk lamp is humming, you probably need to get it fixed. It shouldn’t hum.

It should illuminate your desk, and blessed are truly those whose desk harbours that which brings spiritual satisfaction. Surely such should be one of life’s aims, not life’s sole aim that would be tragic, but certainly a high aim of life should surely be that when you turn your desk lamp on of a raw, unwelcoming Monday morning, that which it illuminates, illuminates you with an equal intensity. If it doesn’t. That’s not your desk lamp. Go find yours……

One of the recurring themes in songs critical of office life and office work is the juxtaposition between the working life and the private life, the way the selfish demands of office life inherently hinder the development of a meaningful work/life balance, and for all the urgent need office workers feel to use the weekend to compensate for the drudgery and vexations of the office week. Such is the fate of Suede’s universal subject:

“Today she’s been working”, we learn,

“Today she’s been sat there, sat there in a black chair, office furniture, but it’ll be alright,”, we are assured,

But you know it won’t, it won’t be alright

Because there remains the “black chair, office furniture”, and as long as that remains, it can never be alright, one will always need the gratuitous sensory intensity of a Saturday night.

And while in 1996 all office chairs probably were black, one can’t help sensing a metaphor

Time The Avenger – The Pretenders

Despite the universally accepted truth of life’s transiency there are always those who believe that they can sidestep their mortal fate; for some the (apparent) answer is religion, in a metaphysical understanding of their physical self, for others it is their wealth and power that protects them, the latter being exemplified by Chrissie Hynde’s protagonist, or better put the latter was exemplified by Chrissie Hynde’s protagonist, for truth has arrived, time has arrived, and as Hynde chides him,

The “leather chair” tells us all we need to know. As does “girls”. We’re dealing here with a powerful executive. And not one of the nicer variety.

In terms of “leather chair”, as Jonathan Olivares argues, the introduction in the early 20th century of working methods based on the principles of Fredrick Winslow Taylor led to hierarchical office structures, each level of the hierarchy having its own, identifiable, form of seating, or as Olivares phrases it, “executives, managers, and secretaries typically sat in chairs that reflected their status.”1 A state of affairs that remained the norm for the majority of the 20th century, in many ways becoming more pronounced, the latter decades of the 20th century increasingly seeing workers’ chairs becoming more functional, while executive chairs became more representative; workers sat in machines, executives in leather chairs.

And while today office chairs may be more democratic, while modern office practices and organisations, for all flatter hierarchical structures, and the greater use of home working and flexible office furnishings, may have made differing classes of office chairs largely anachronistic, executive leather chairs still exist. For all symbolically.

Just remember never to confuse the symbolic for something more authentic………

Freshly out of jail and earning a living at the car wash, Jim Croce’s narrator laments how, being as he is “genius” [sic], he shouldn’t be where is, but should be “sittin’ in an air conditioned office, In a swivel chair”. Because that is where you find swivel chairs. In offices. Air conditioned and otherwise.

Popular convention has it that the first swivel chair was developed by Thomas Jefferson in the 1770s, as an office chair, and as an object the rise of the swivel chair is inextricably linked with the subsequent rise of the office: by the middle of the 19th century most every clerk in one of the new organs of state and industry would have sat on a swivel chair, and over the intervening decades the swivel chair has seen its character alter and evolve as the character of office life and office routines have altered and evolved. Only few objects being such reliable documents of developments in office culture, office sociology, office politics and the relation of the office to wider social, cultural and technological understandings as the swivel chair. And only few objects so perfectly responding to, arguably understanding, an inherent, almost genetic, need of an office worker to wiggle a little.

Consequently, as soft ergonomics and new understandings of office culture and work/life balances see non-swivel chairs, rocking stools, perches, sofas, sleep pods, et al, become ever more common in office landscapes, so will the swivel chair alter and evolve in response to the new realities, it will take on new new forms and functionalities, while remaining irrefutably and unassumingly the same, and for all will remain the object that most satisfyingly meets the seating demands of the office worker.

The Radio smow office furniture playlist, and all smow playlists can be found at the smowonline spotify page.