What first attracted us to the work of Jason Miller at ICFF was the fact it was dirty.

Obviously not pysically grubby, but dirty.

As in a get down, funky, sort of dirty. Downtown Manhattan circa 1976 dirty.

And we liked that. A lot.
A similar emmotion grabbed us here at DMY Berlin as we walked past the stand from Design Apparat.

The furniture was filthy.
Again not in a grubby, don’t sit down you’ll ruin your jacket sort of way; rather in a “did you find that in Warsaw Pact appartment block?” sort of way.

And although we hate it when things are obvious, we were overjoyed to discover that Design Appart do in fact have their roots in Eastern Europe

Part Italian, part Bulgarian Design Apparat was officially launched at the Salone in MIlan – we’re sorry to say we didn’t just miss them, we weren’t even aware they we there – and take the stylistic traits of Bulgarian interiors of the 20th century as their starting point.

Not, as Design Apparat make perfectly clear, as an operation of retro-nostalgia or as a chauvinist celebration of Marxist-Leninist dogma,  but rather an impassioned design exercise aimed at preserving a school of design that still offers noteworthy elements of attraction and some contemporary values.

And fortunately the furniture they produce is just as beautifully crafted as their press releases.

For example, the Bansko Boo lounge chair and ottoman. Not only does it positively invite you sit down, but once you do so it is so amiable and comfortable that you not onyl feel obliged to relax – you have no other choice. And then there are the wonderful wooden trays/racks. Not only can they be used for placing cups, plates and the like on – so as  sort of table – but you can also use them to keep your shoes off the ottoman if your the sort of person who wears outdoor shoes indoors. 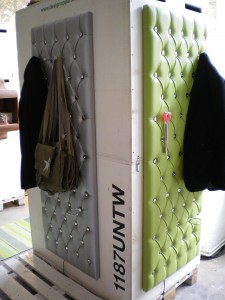 The  wall panel “Secrets” appealed not as you may think because it genuinely looks as if it has been ripped out of a Sofia highrise, but because of its beuatiful, unobtrusive functionality. Available with range of accesories including hangers, small shelves and even a vase, one of the real delights of “Secrets ” is the inbuilt LED lights.

All in all we were very impressed with what Design Apparat had to offer and look forward to following their development in the coming years. 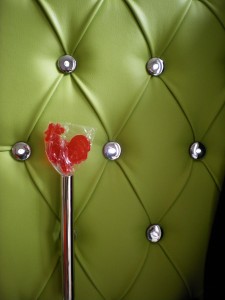