If your going to organise an exhibition called “The Revolution of Space”, there is probably no more fitting location than Frank Gehry’s “revolutionary spaced” Vitra Design Museum building in Weil am Rhein. Unless that it is your exhibition happens to be dedicated to Gerrit Rietveld a man whose canon is principally defined by linear, regular, sober forms.

The Vitra Design Museum have risked the contrast and consequently visitors to “The Revolution of Space” are not only presented with an overview of the man, his work, his influence and his legacy; but also the most fantastic series of formal juxtapositions. 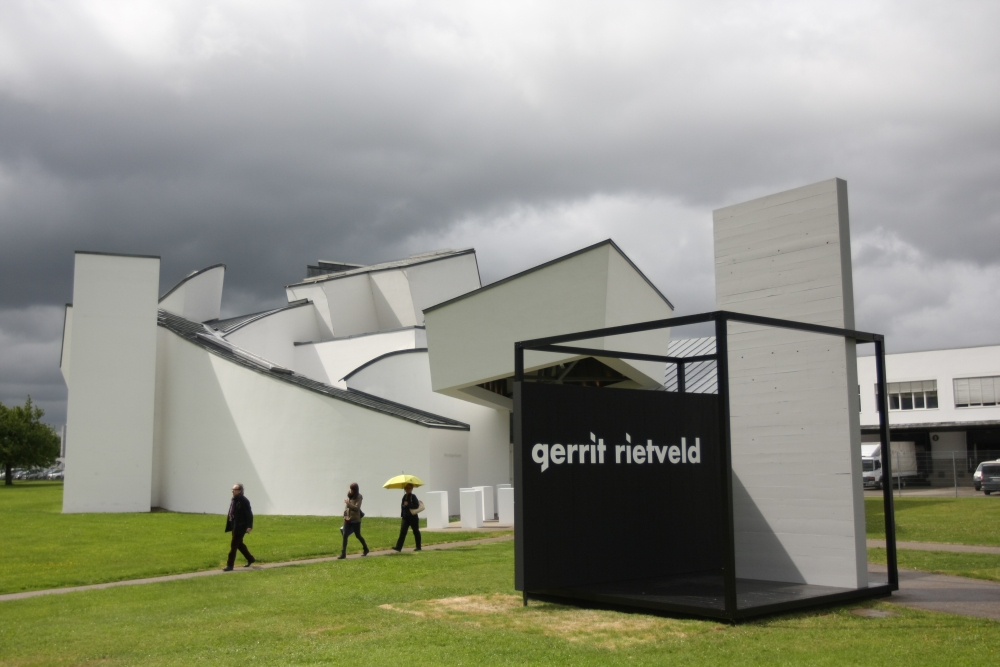 Vitra Design Museum: Gerrit Rietveld - The Revolution of Space. Even the weather adapted to the Rietveld monotone

Born in Utrecht in 1888 Gerrit Thomas Rietveld left school at age 12 to work in his father’s carpentry workshop. Following a spell as a technical drawer and model maker for the Utrecht goldsmith and jeweler C.J.A. Berger, Rietveld established his own carpentry workshop in 1917 and the following year he created the first, still colourless, version of his Red Blue Chair; a work that was to prove both a blessing and a millstone. In 1919 Rietveld made his first contact with leading members of the Dutch creative group de Stijl, a movement of artists, designers and architects that equally proved to be blessing and millstone in perfect unison. Subsequent years saw him turn his attention increasingly to architecture projects and in 1928 Gerrit Rietveld was one of the founding members of the International Congresses of Modern Architecture alongside luminaries such as Le Corbusier, Mart Stam or Hannes Meyer.

“The Revolution of Space” is largely based on the exhibition “Rietveld’s Universe” that was shown in Utrecht in 2010. The new title reflecting changes made by the Vitra Design Museum in terms of the context and style of the exhibition. In addition to new items that explain Rietveld in the context of his time, the current exhibition follows a largely chronological progression in contrast to the more thematic approach presented in Utrecht.

Consequently “The Revolution of Space” opens with the Rietveld classics. Which is good. For much like Metallica’s “Black” album tour when they played “Enter Sandman” as the opening song and thus meet all expectations head on, it frees and opens your mind for new, or long forgotten, experiences.

And moving beyond the classics, one understands not only in how many different fields Rietveld was active, but in how many areas of furniture design and architecture he was ahead of his time. And how much of what he attempted, but didn’t necessarily realise, can be enjoyed in the work of designers from later periods.

If, for example, a chair formed from a single piece of bent metal sounds familiar, then the chances are you’ve read our interview with Harry Thaler.

The form language and concept are completely different, but Rietveld was there in 1942; experimenting, pushing limits, doing exactly what the HFBK Hamburg symposium “Warum Getsaltung?” taught us is the designers primary function.

And it’s not just Harry who has found himself temporally upstaged by the assiduous heer Rietveld, “The Revolution of Space” contains numerous examples of designers whose work either shows indications of Rietveld’s influence or whose work involves themes that Rietveld was experimenting with a generation or two previously.

For us the parallels to Bauhaus are most interesting.

Because they pose the question, why didn’t Gerrit Rietveld go to Bauhaus?

The visual similarities between the principle Rietveld works and the popular Bauhaus works is unquestionable, as is the fact that Rietveld and several Bauhäusler were working in a similar fashion on very similar themes at similar times, and that they unquestionably influenced one another. While in our interview with Bauhaus Archiv Berlin director Dr. Annemarie Jaeggi she talks about how part of the Bauhaus philosophy was testing materials and discovering what was possible with them. In every room of the Vitra Design Museum one finds examples of Gerrit Rietveld doing just that.

And so why not join forces?

The exhibition curators Ida van Zijl from the Centraal Museum Utrecht and Amelie Znidaric from Vitra Design Museum are in full agreement that Rietveld’s private situation in Holland simply didn’t allow him to travel to Bauhaus. It wasn’t an issue. And that in any case he was probably happy enough with those projects he had, and simply didn’t have any real desire or need to travel to Germany.

For had he travelled to Weimar or Dessau there is the obvious risk that he would have become just another part of the Bauhaus story.

Which would have been an injustice.

For be it as a pioneer of Open Design, as an modern urban planner or as one of the first designers to be asked to design aircraft interiors, Gerrit Rietveld was a man of many, many talents.

For us the parallels with Jean Prouvé are inescapable, but according to Ida van Zijl there is one central difference, “For Prouvé the industrial production was very important, for Rietveld the idea was more important. It was less important how it was made, important was that it was made”

And therein lies, possibly, a further reason why Gerrit Rietveld never went to Bauhaus. His heart potentially beating a little more for the craft and less for the industry, thus putting him more in the tradition of Arts and Crafts or Deutsche Werkbund than the industrial focused Bauhaus. 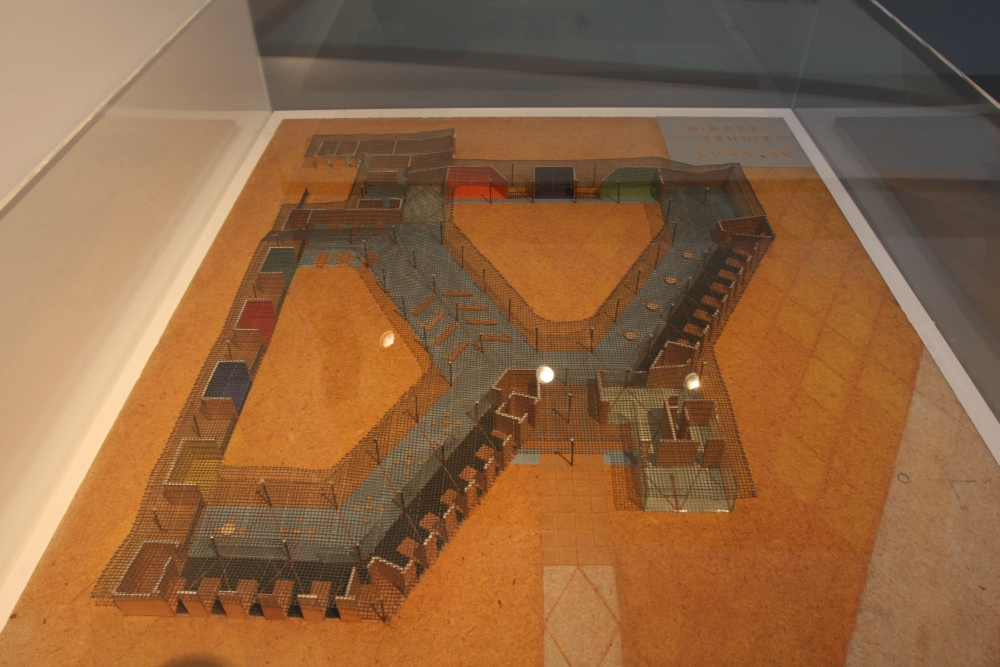 A model for the Verriet Institute for handicapped children, Curacao. Designed by Gerrit Rietveld and Henk Nolte 1949-52

Despite all the genuine innovation, vision and experimentation, Gerrit Rietveld remains a man trapped by his early work; for all the Red Blue Chair has become such a design icon that it is nigh on impossible for most of us to separate the man from that one object. But why should that be? Is the early work really better than what came later? Why does the popular image of Gerrit Rietveld stop just as his career was really starting ? For Ida van Zijl, part of the problem can be found, somewhat ironically, in the movement that initially brought Rietveld to a wider public, “de Stijl is so important in the history of the 20th century, and consequently those works that were produced in context of de Stijl are inevitably the best known and most widely recognised”

And so by extrapolation shroud all other works. Which in Rietveld’s case is the majority of his oeuvre, and in particular his later works.

Works we may never have had if the Centraal Museum Utrecht hadn’t staged a Rietveld retrospective in 1958 that re-focused attention on the man and highlighted his contribution to European architecture and design.

That said Rietveld remains someone whose rehabilitation is not yet complete, he remains a man who it is all too easy to describe in three or four projects. “The Revolution of Space” beautifully makes clear that there is much more to Gerrit Rietveld, much more to enjoy, much more to discover, much more to learn.

We hope that visitors take the hint.

And the location ? Would Gerrit T. Rietveld approve of a building such as the Vitra Design Museum? Would he be glad that his work was on show in a Frank O. Gehry temple to the decadent formless organic? We ask curator Ida van Zijl. She laughs warmly.”Definitely! He wasn’t a crusader, wasn’t on a mission to convert others to his beliefs. There was, for example, a Dutch architect called van Ravesteyn who developed an almost baroque form of functionalism. All the leading Dutch architects of the day criticised him and said that what he was doing was wrong. And it was Rietveld who said “No! Everyone has their own interpretation of modernism”, And so I think he’d be interested to see this building and very happy to have his work on display here”

Gerrit T. Rietveld The Revolution of Space can be viewed at the Vitra Design Museum Weil am Rhein until September 16th 2012. 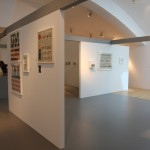 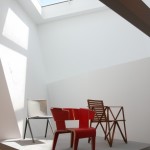 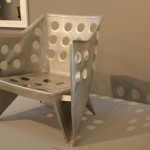 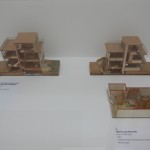 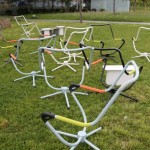 Presumably as an homage the Vitrahaus have reinterpreted Waver by Konstantin Grcic a la Gerrit Rietveld
Vitra Design Museum: Gerrit Rietveld - The Revolution of Space 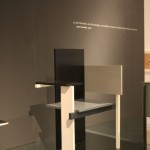 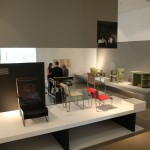 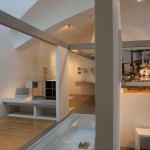 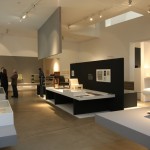 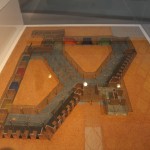 A model for the Verrit Institute for handicapped children, Curacao. Designed by Gerrit Rietveld and Henk Nolte 1949-52
Vitra Design Museum: Gerrit Rietveld - The Revolution of Space 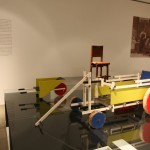 A childrens "beach cart" by Gerrit Rietveld, 1922-23. The wheelbarrow in the background was made in 1922 or J.J.P.Oud's son.
Vitra Design Museum: Gerrit Rietveld - The Revolution of Space 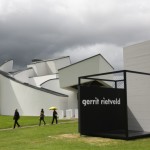 Not just the guests, even the weather participated in the festivities at the exhibition opening
Vitra Design Museum: Gerrit Rietveld - The Revolution of Space