Given that Cologne is geographically closer to Brussels than Berlin, there probably should be more Belgian designers exhibiting at Cologne Design Week than there actually/normally are. Also because a Belgian Frites seller can be found on near every street corner, thus ensuring no Belgian – or indeed Dutchman, Scot or Australian – need go hungry.

Among the Belgians who are here this year are old (smow) blog favourites Tim Baute and Stefaan De Croock aka Atelier Bonk who are presenting their current collection in the rarefied atmosphere of the Belgisches Haus and who have been joined in Cologne by Gent based designer Cas Moor.

In addition to the Bonk Bench and Stoemp candle hol… potato masher presented in Milan, Atelier Bonk are presenting two new products in Cologne. Two new products which according the Tim and Stefaan reflect a desire to adopt a more proactive graphic orientated approach to their work: to move away from letting the graphic define the form of the object as is the case with the Bonk Bench, and towards using graphics to enhance an object and expand the functionality.

And two new products whose names we didn’t note.

The first new product is a simple folded cone shaped powder coated steel lamp into which a pattern has been cut. Designed to be used as a hanging, floor or table lamp the logic and function of the cut can be seen as darkness falls and its pattern spreads across the room.

Much as we liked the lamp, much more to our liking however was the new wall mounted clothes/coat rack system. Cut from one piece of powder coated steel the hook is bent out from the body to create a wonderfully reduced, space saving product that we can well imagine working perfectly in any entrance hall where space is of a premium. Not least on account of the soothing 3D effect transmitted by its sightly skewed lines. In addition with its honeycomb structure you also have an infinitely extendedable system. As with all good design, nothing more than a simple idea expertly executed.

Cas Moor is largely presenting prototypes in Cologne, but there is good reason for that. He’s already found manufacturers for many of his chair design. Watch this space for more details.

The prototypes however provide a delightful insight into his design philosophy, his understanding of the design process, and certainly give one hope for the future. His obviously… not ours.

Similarly the Honest Stool developed from the experimental OSB collection is as much a window on Cas’s understanding of design as it is a delightful object.

Specifically created to be distributed open source as a pdf construction plan, every stage of the product development has been geared towards achieving an object that anyone can construct themselves, but which still retains a functionality, a charm and a delicate sense of proportion that make it a desirable object to posses.

The show here in Cologne was was the first time we’ve come across Cas Moor, and we’re looking forward to seeing how his work develops.

Aside from the objects themselves a fascinating aspect of the show is the mix of Cas Moor’s wooden products and the powder coated steel of  Atelier Bonk’s collection. And the good news is that despite initial fears the two harmonise delightfully. We suspect it is because both employ similar rapid processing processes to produce their works, something that can be sensed from the final objects, all objects have an appealing, inherent industriality about them, that and the fact that the principle focus of both design studios is the material and its properties rather than the object per se. Something which gives the objects a certain legitimacy and accessibility.

Regardless why it works, it works.

And should certainly be experienced.

With or without Frites.

Design Flanders. Atelier Bonk and Cas Moor can be viewed at the Belgisches Haus, Cäcilienstrasse 46 50667 Cologne until Sunday January 19th 2014. 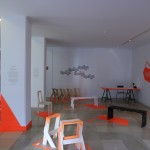 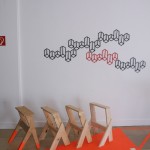 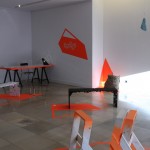 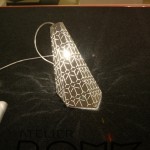 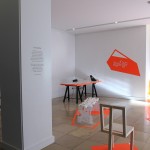 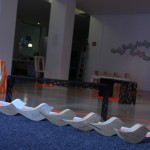 Tjirp by Cas Moor – the development from first prototype to product. 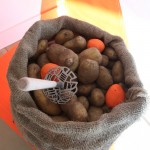 Stoemp potato masher by Atelier Bonk. With a visual clue as to its function…… 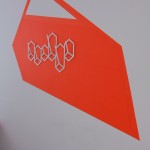 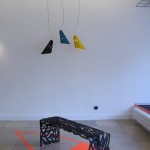 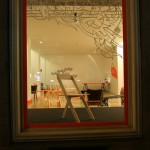 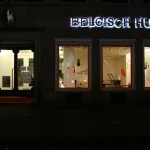