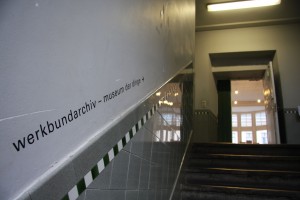 Because our article on the new London bus has been delayed by a broken water main at Tooting Bec, we’ve decided instead to do an impression of a typical London bus user.

“Typical, wait ages and then two come along at once! I blame Ken Livingstone!”

Ahead of the opening of the Dieter Rams retrospective “Less and More: Das design ethos von Dieter Rams“,  yesterday saw the opening of a second exhibition dedicated to the life and work of a former Braun designer.

The Werkbund Archive Berlin’s Herbert Hirche exhibition “Strahlend Grau” is a beautifully compact overview of a designer who, despite his relative anonymity, is equally as important as Dieter Rams, Egon Eiermann or Ludwig Mies van der Rohe: just three of the grand doyens of German design with whom Herbert Hirche collaborated. 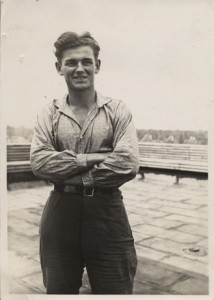 Strahlend Grau: Herbert Hirche on the roof of Bauhaus Dessau, 1932

And a fitting event to celebrate Herbert Hirche’s 100th birthday.

Born in Görlitz on May 20 1910, Herbert Hirche studied at Bauhaus in Dessau and Berlin. Following the closing of the institution in 1933 Hirche joined the office of his former professor, Ludwig Mies van der Rohe, remaining in his service until Mies van der Rohe fled to the USA in 1938. After a year freelancing, Herbert Hirche joined Egon Eiermann’s Büro where he remained until Eiermann left Berlin in 1945 ahead of the advancing Red Army.

To lose one employer to a totalitarian regime is unfortunate; two starts to begin to look like a curse.

In the post-war years Herbert Hirche was closely involved with the rebuilding of Berlin in addition to teaching; initially at the Hochschule für angewandte Kunst in Berlin-Weißensee and subsequently at the staatliche Akademie für bildende Künste Stuttgart, where he also served as rector between 1969 and 1971.

Curated by Nicola von Albrecht, Strahlend Grau presents a chronological journey through Herbert Hirche’s life, wonderfully illustrated with original letters, documents and photographs. One of the highlights for us being a letter from Egon Eiermann confirming that Hirche could take up a position in his office: little things like that really bringing the otherwise abstract concept that is someone else’s life to well … life. 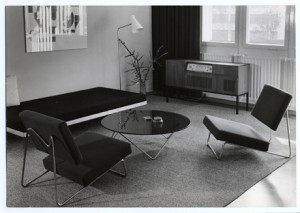 And Strahlend Grau is full of such moments.

What it is not full of however is furniture.

Largely because much of Herbert Hirche’s work never proceeded beyond the prototype stage, and consequently his legacy is largely only on paper.

As far as we are aware these are the only examples of his work currently in production; and that despite Herbert Hirche working for producers as varied as Knoll, Wilkhahn or Wilde + Spieth.

Richard Lampert himself was also present and he told us how he came to Herbert Hirche; and fortuitously it was not through long research in a stuffy archive while looking for commercial opportunities in forgotten designs.

No, Richard Lampet’s introduction to Herbert Hirche was during a long evening in the convivial and non-stuffy surroundings of Stuttgart’s legendary Santa Lucia restaurant; a restaurant for whom Hirche not once but twice conceived the interior design and for whom he created the Rattan chair.

Having been initially sceptical about the chair, Richard Lampert was so impressed with it that he returned the following day to ask where it came from.

And so began a wonderful relationship, whose latest chapter was the awarding of the “Classic Innovation” Award at the 2010 IMM Cologne for the relaunched H57 armchair.

Such stories always cheer us up as they prove that good, honest design will always succeed over hype, star names and large marketing budgets. And that gives us hope for the future.

Strahlend Grau is not an expansive exhibition, nor is it an exhibition that can be passively viewed. A visit to Strahlend Grau means actively searching for and considering the presented information. But the effort is worth it and there are some true gems to be found.

And more importantly it is a wonderful introduction to a designer who deserves more credit than he publicly gets and for all to an era of German design that has much more to offer and was much more instrumental in shaping European industrial design than many people are prepared to accept.