Although an addition to the Monza family the Monza Bistro also represents a very nice evolution of the family, and one which in many ways brings it closer to the Scandinavian typologies which influenced the original Monza Armchair.

Or put another way, the twist in the back leg to achieve the necessary stability for supporting the half-length backrest is pure Hans J. Wegner. Yet in an object which Wegner would never have considered; although not familiar with all of his 500+ chair designs, we’re tipping that he never approached the round seated bistro/dining/kitchen chair.

And, and without wanting to appear dismissive of the great Dane’s unquestioned talent, he probably wouldn’t have achieved such a pleasing result. Would, we believe, have gone too sculptural.

Combining a polypropylene backrest and polyurethane foam seat with a beech frame, the Monza bistro chair is a charming, inviting object which is aesthetically very rewarding without having to resort to the sculptural. It’s basic. Very basic. And very well considered. Very well executed. And very comfortable. The later owing a great deal to the half-length backrest which supports without constricting, allows free movement, and somewhere to place your elbows. All in all a delightful, uncomplicated chair for home, office, shop, or even bistro. 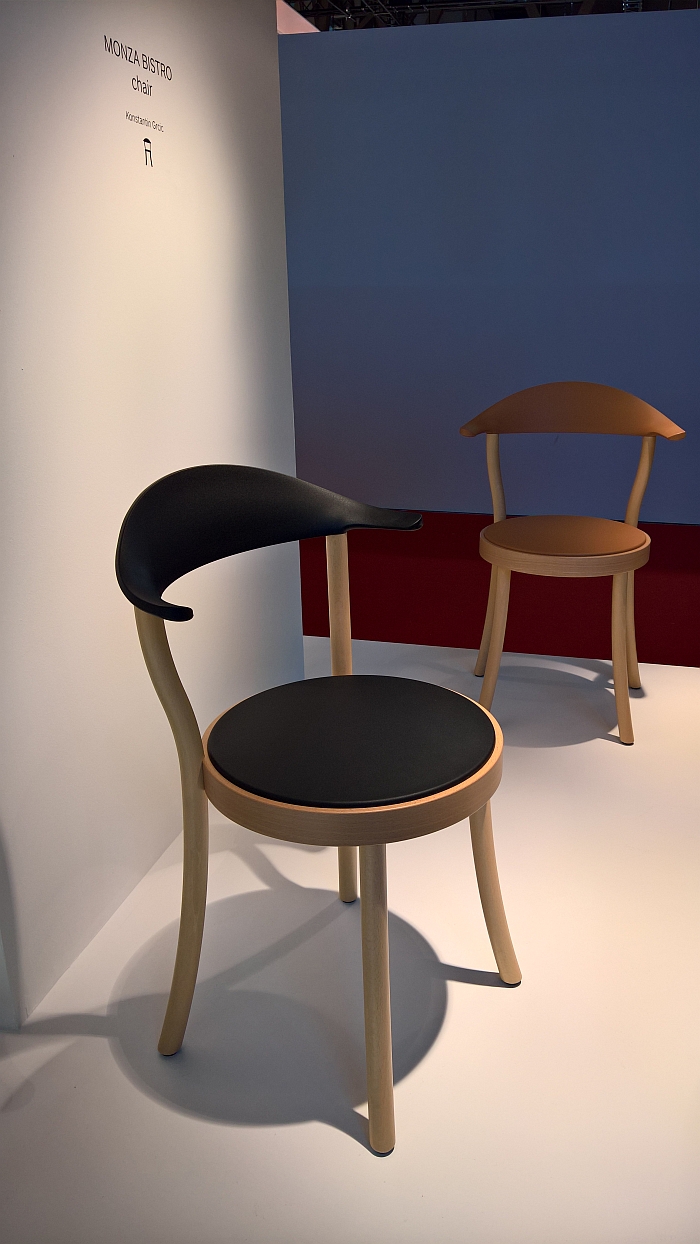 Apparently Magis presented the first objects from the Brut collection at Milan 2016. We happily admit to having missed them. Happily, because one should never deny one’s shortcomings, but revel in them, and happily because the Brut sofa and armchair presented at Milan 2017 are for us much more interesting and pleasing items than the 2016 tables. Tables which may have prejudiced our view of the sofas and armchair.

Featuring a cast iron frame the Brut sofa collection is not one for those who regularly like to rearrange their furniture. To experiment with room layouts. Alone the armchair weighs around, plus/minus, 8,000,000 tons. Brut is furniture you hoover around. Against which you really, really don’t want to stub your toe. And to which we presume you could happily tether a horse without fear of it bolting.

Yet despite the physical weight, the visual weight approaches zero, in may ways the upholstery appears heavier than the reduced and nicely proportioned frame, and this lightness of form combined with the almost irreverent, tubular backrest element bequeaths the Brut sofa and armchair a genuinely charming and endearing, relaxed and familiar personality. They invite to sit and linger. And when you do, the comfort impresses as much as the aesthetics. Even if the sofa is not necessarily the perfect object for spending a long evening with a good book and a better wine. It’s more an occasional sofa. But no less interesting a project for it. 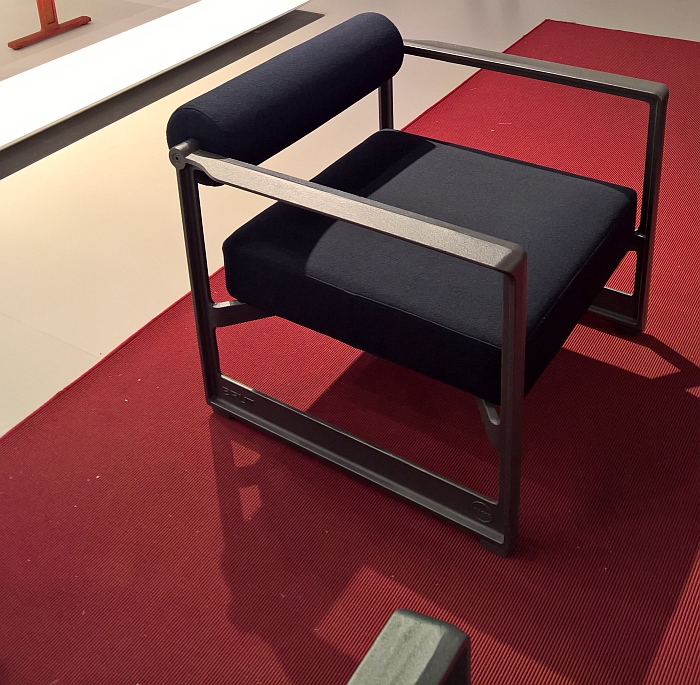 Brut Armchair by Konstantin Grcic for Magis, as seen at Milan Furniture Fair 2017 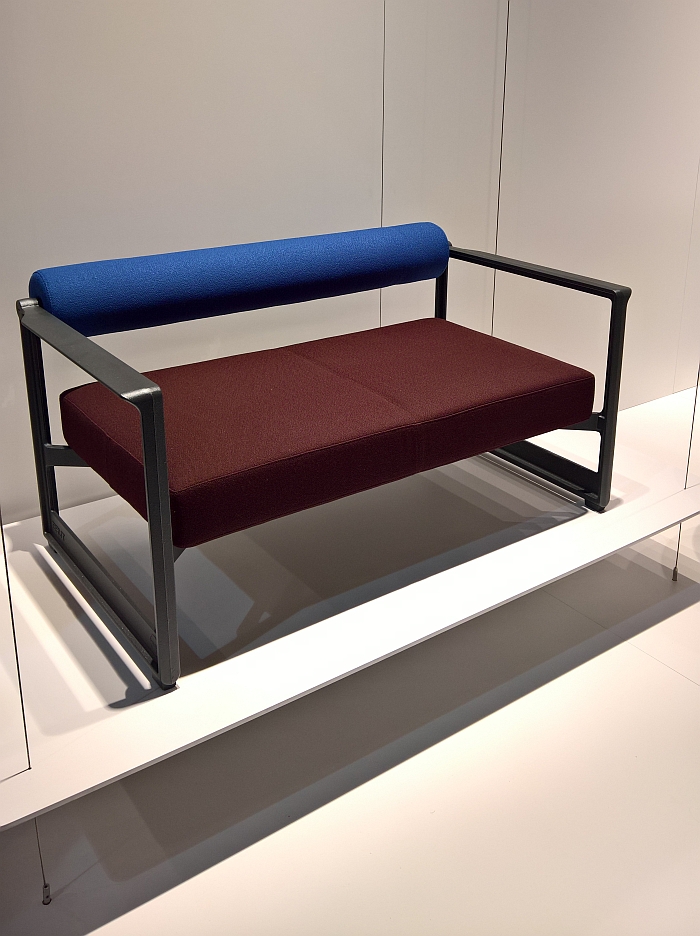 Brut Sofa by Konstantin Grcic for Magis, as seen at Milan Furniture Fair 2017

As previously noted, with his Primo Chair for Mattiazzi Konstantin Grcic has, for us, produced a very pleasing, contemporary, reinterpretation of the basic wood chair, and an object which thanks to its straight legs, quadratic soul and compact form is not only very much in control of itself, but of all that surrounds it.

What stops it using this control malevolently, ensures it remains accessible and sociable, and perhaps more importantly stops it becoming trite and mundane, is the inset, obtuse backrest. Not only a very pleasing formal variation which brings the necessary tension to the composition, it is also very comfortable. Is a backrest one can lean into and onto when the mood takes.

Essentially nothing more than a simple wooden chair, with Primo Konstantin Grcic neatly demonstrates his talent for extracting the maximum from everyday objects and that design needn’t be about innovation, evolution is often preferable. 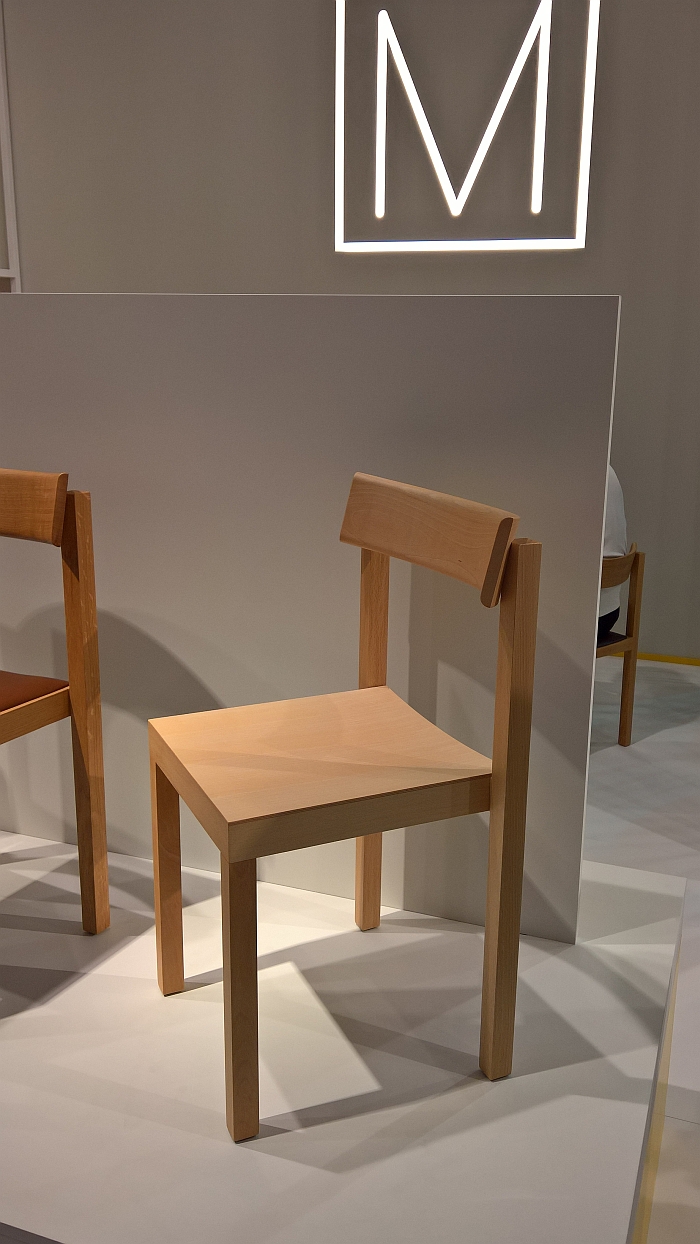 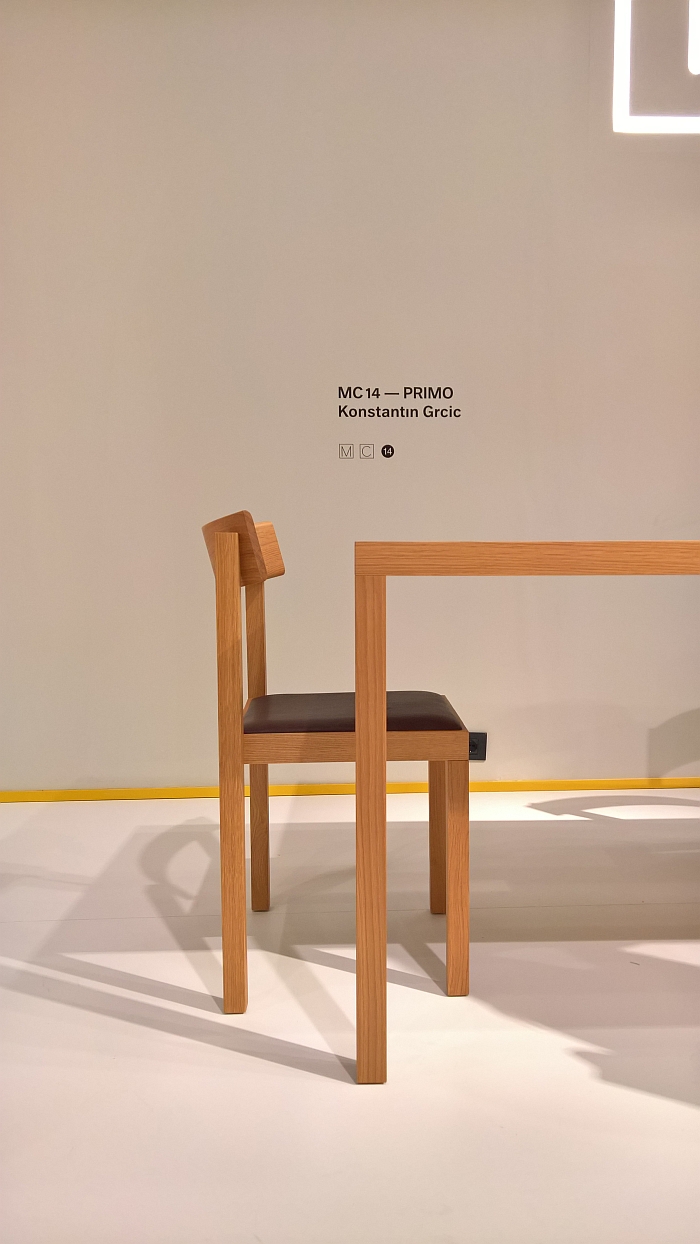 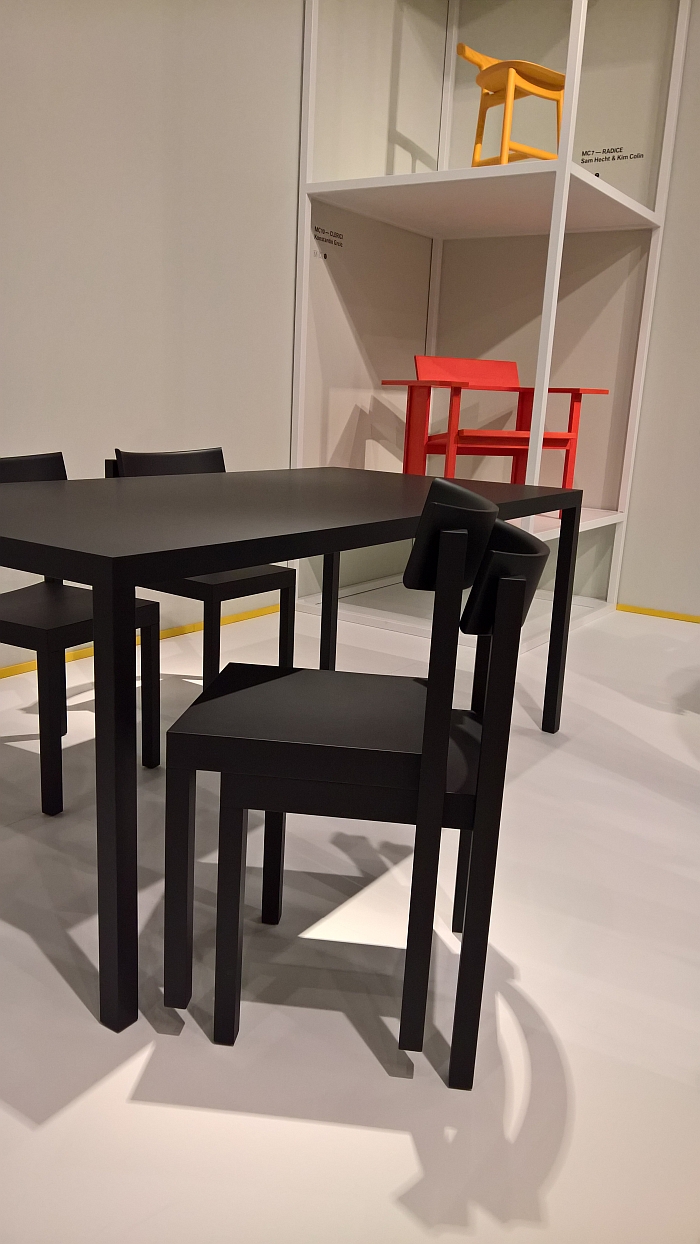 A modular system which allows for a range of floor or hanging lamps across a wide range of scales, Noctambule is an impressive mix of both the industrial and the classical.

Industrial as in the hanging lamp version which resembles those oversized industrial lamps which grace, or at least graced, factories and warehouses. The use of glass simply accentuating the joy of the line as the shade fans out.

Industrial as in the tenor of the modules which although blown, unquestionably hark back to the early days of industrial pressed glass production. Much finer and refined than anything realised in the 1920s, don’t get us wrong. But which speak a similar language

Classic as in the suggestion of Greek and/or Roman columns. While not directly comparable with any of the five classic orders, there is something of the confidence and serenity of the architecture of the day in the way the Noctambule glass columns, whether suspended or free-standing, present themselves.

But perhaps the most impressive aspect of Noctambule is that the light doesn’t come from where it should. In many respects doesn’t actually come from anywhere.

The light is the connection between the modules. The glass is in many respects just the (irrelevant) conduit which allows the light to be suspended in space. Filler material almost. Filler material held together by the glue-like strength of COB LED light.

Something it took us an awful long time to realise. As in, absolute ages. Focussed as we were on the formal elements. Formal elements which are anything but irrelevant filler, but delicate, graceful, and delightfully harmonious glass objects. The only slight irritation for us is the optional “wick” like insert, for us that is just a little, well, ostentatious, showy, in an otherwise unassuming object.

Based as it is on elegant glass units, Noctambule would appear to be an object that will enhance a space whether illuminated or not, will always reflect and refract ambient light, while being itself more or less absent. Two for the price of one….. 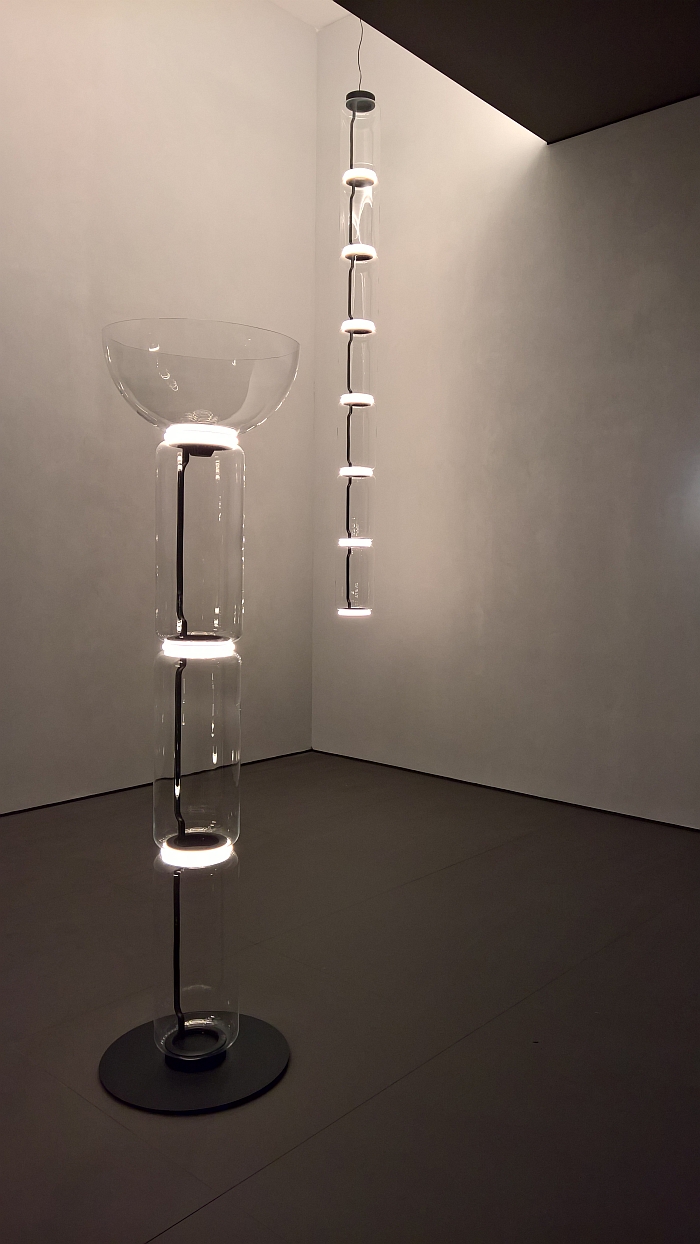 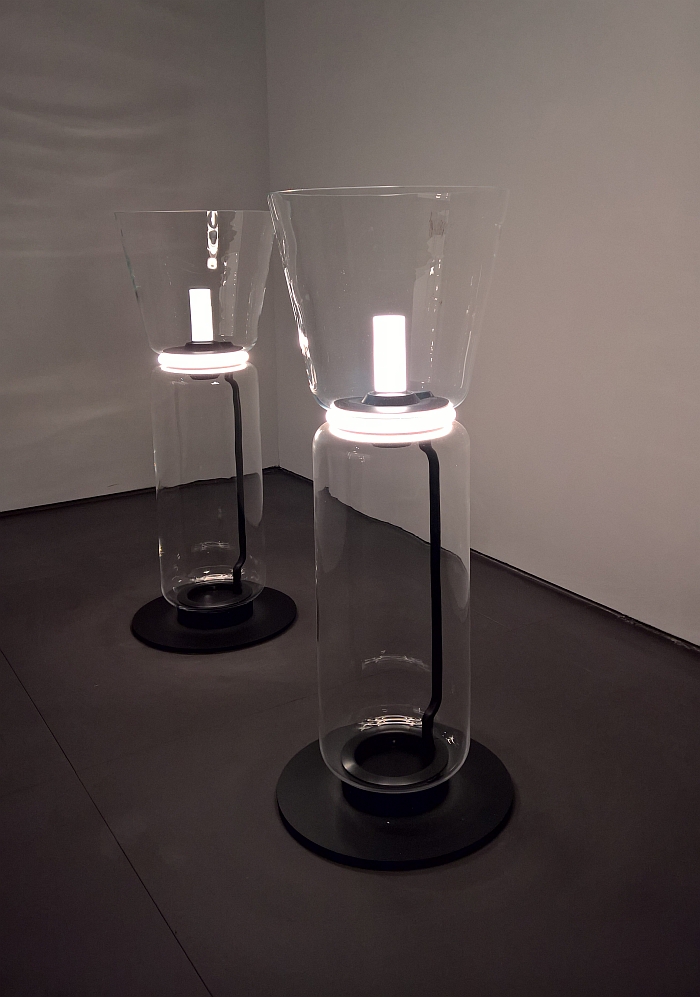