“The problem of the construction of affordable housing for the lowest earning sections of the population is currently a primary concern in almost all civilized countries.”

Thus invited the Congrès internationaux d’architecture moderne to their second congress, a three day event which opened on Thursday October 24th 1929 in the Palmengarten Frankfurt am Main, and which saw some of the leading protagonists of inter-war architecture discuss potential solutions for that most primary of concerns.

The success of the Frankfurt congress can perhaps be best summed up by the contemporary relevance of the invitation.

Furniture for Neue Frankfurt by Ferdinand Kramer, as seen at Germany versus France. The Struggle over Style 1900-1930, Bröhan Museum Berlin (2016)

Initiated by the Swiss artist and patron Madame Hélène de Mandrot with the aim of bringing together the leading contemporary architects to discuss priorities and future directions,1 the inaugural Congrès internationaux d’architecture moderne, CIAM, was held in June 1928 at Schloss von La Sarraz, Switzerland and was attended by 24 international architects, including Mart Stam, Gerrit Rietveld, Josef Frank and Le Corbusier, the latter, and after much persuasion from Madame de Mandrot, drafting the meeting’s agenda.

Although the intention of holding a second congress in Frankfurt was proposed at La Sarraz, the location was only confirmed at a steering group meeting in Basel on February 2nd 1929, and was made specifically because in Frankfurt the questions to be discussed could be illustrated “by the practical case”2; a reference to the Neue Frankfurt project initiated in 1925 by Ernst May and at that time the most extensive functionalist, social house building and urban planning development programme in Europe.

Staged under the title Die Wohnung für das Existenzminimum – The Dwelling for the Living Income Earner3 – the Frankfurt CIAM congress was attended by some 120 participants from 18 countries,4 including the likes of Poul Henningsen, Alvar Aalto, Richard Neutra and Farkas Molnár, with the, what today would be called Keynote Speeches, held by Victor Bourgeois, Hans Schmidt, Walter Gropius and Pierre Jeaneret who read a text from Le Corbusier, a lecture tour of South America enforcing his absence.

In addition to the conference CIAM Frankfurt also featured the exhibition Die Wohnung für das Existenzminimum, which presented some 100 international examples of contemporary, affordable apartments, including examples of American hotel suites, and which according to Eugen Kaufmann represented the first exhibition which “is focussed on developing the necessary solutions to the contemporary problem”.5 To this end all exhibited projects were presented in the same uniform format, and anonymously, thus allowing for a purely objective comparison of the proposals without being blinded by the fame of the architect, or distracted by their preferred presentation format. A fascinating concept, one whose use we’d very much encourage today, if one only slightly derailed by the magazine Das Neue Frankfurt, the official publication of the eponymous programme, printing the names of several architects next to their proposals.

Viewed by some 3,000 visitors over the course of its three week Frankfurt run, the exhibition subsequently travelled to Warsaw, where it was reportedly viewed by over 20,000,6 and was then scheduled to visit Basel, Zürich, Stuttgart, Munich, Paris, Magdeburg, Kaliningrad, London, Milan, Brno, Prague, Hamburg, Brussels, Essen and Chemnitz.7 We are a uncertain as to how many presentations were actually realised, but aside from neatly demonstrating the exhibition’s intentions, even if only half of the shows had been staged it would have made Die Wohnung für das Existenzminimum one of the most widely presented exhibitions on the subject in Europe at that period. 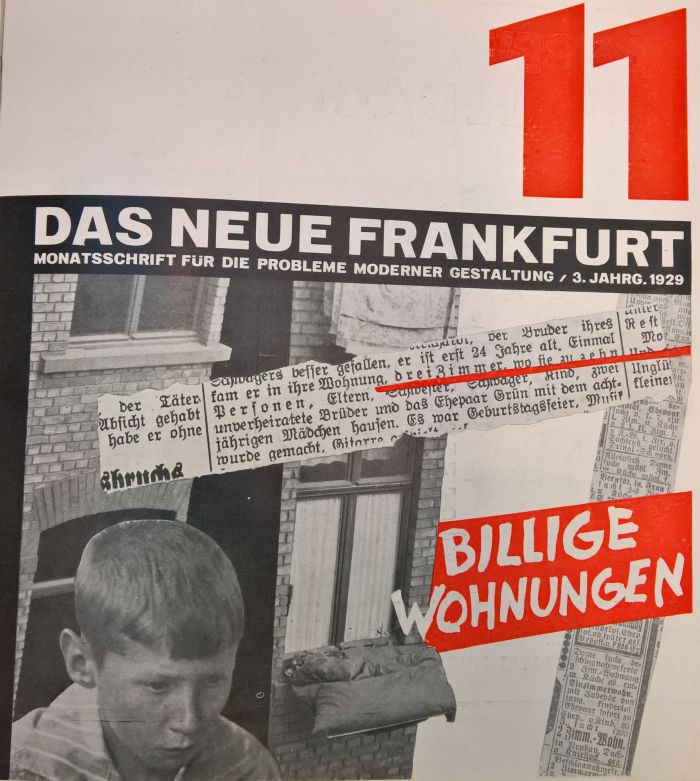 The Die Wohnung für das Existenzminimum wasn’t the first consideration on how to achieve sufficient affordable, hygienic and safe housing.

Nor would it be the last.

Arguably because many of the basic conditions have remained unchanged, not least the actual process of house building.

At CIAM Frankfurt a prevalent theme was contemporary construction methods, or as CIAM Secretary Sigfried Giedion noted in his opening address, “almost as the last major production area, architecture is moving from manual to industrial production. Currently, it has not taken more than the first steps.”8 While today a couple of further, tentative, steps may have been taken, house construction remains a, relatively, slow, manual, process. And therefore costly.

Projects such as Neue Frankfurt were made possible by the so-called Hauszinssteuer, a tax imposed from 1924 onwards on all private housing, the revenue being ring-fenced for the construction of social, public housing. And arguably that was where the Frankfurt congress should have placed it focus: the ” practical case” being in many regards less the Frankfurt floor plans and more the Frankfurt financing method.

And by extrapolation, when looking back on Neue Frankfurt we should perhaps focus less on what was undertaken as on how it was undertaken. Not that we’re advocating any radical socialist taxation policy, simply as much innovation in financing construction as in construction itself.

In addition, it remains today very much the case that such explorations of possible housing futures are still, almost exclusively, initiated by architects, occasionally museums; and so not by those who make decisions, which means that regardless of how honourable the intentions, such proposals only have very limited chances of success.

What has thankfully changed is the public nature of such discourses. Inexplicably for us the first two days of CIAM Frankfurt, and thus the main, and by all accounts very lively, discussions, were not only closed to the public, but also to the press. That today the public are invited to actively participate in such discussions is important, for, it may, one day, possibly, lead to a situation of the authorities being forced by public opinion to initiate such explorations, the architects then planning in context of a defined, realistic, financial and temporal framework.

Thereby allowing them to develop successful solutions; solutions urgently needed because, the problem of the construction of affordable housing for the lowest earning sections of the population is currently a primary concern in almost all civilized countries.