Staged as it in mid-January IMM Cologne is not only the first event in our new diaries, but, coming as it does after a period when we’ve been distracted by life in its full technicolour glory, often the hardest. How quickly have we come out of the post-holiday starting blocks? Are we mentally and physically prepared for what awaits us? Is our wit appropriately sharpened and tuned?

IMM Cologne 2017 was the hardest ever.

The first day we found ourselves walking, listlessly, round the exhibition halls questioning why we were there, unable to comprehend how we had come to find ourselves amongst all this monosyllabic formed wood and coloured glass. Why? And the more we strolled the more existential the question became, the borders of the Why expanding beyond the confines of Cologne Trade Fair, Cologne, Rhineland, Germany……

And so we did what we always do in such situations, consulted the Greek philosopher Epictetus, “You should thank the gods for making you strong enough to survive what you cannot control, and only responsible for what you can”, he wrote in his discourse “On satisfaction”, “The gods have released you from accountability for your parents, your siblings, your body, your possessions – for death and for life itself. They made you responsible only for what is in your power – the proper use of impressions. So why take on the burden of matters which you cannot answer for? You are only making unnecessary problems for yourself”

And then we had a bag of frietjes with chilli mayonnaise.

After that our disposition improved greatly.

Over long stretches it was one of the weakest, blandest and most apologetic furniture fairs we’ve been at in years. All too often we found ourselves asking why this or that manufacturer had even bothered. They obviously had nothing to contribute, many didn’t even appear interested in the conversation. And that in the halls where the better, more conscientious, manufacturers could be, should have been, found.

Yes, we may have, inevitably did, miss things. With a fair the size of IMM it is impossble not to.

But, even those odious snake oil sellers who try to convince us that t***ds exist and are important in the furniture industry, struggled to find anything positive to say…….

That said, there were a few bright stars in an otherwise dark, dark Cologne sky, here our High Five! from IMM Cologne 2017. With the hope of better for 2018……

Es liegt was in der Luft by Patrick Palcic

At the risk of belittling Patrick Palcic’s wonderful project, that was our first thought on viewing Es liegt was in der Luft –  There is something in the air. Whereas others analyse objects from a culture historic, art theory or social perspective, we think on our gratification.

Developed in context of Patrick’s bachelor project at the Universität der Künste, UdK, Berlin, Es liegt was in der Luft is a clock which measures the passing of time through smells, aromas. Much like the cuckoo clock of yore every new hour is marked by the release of a new aroma. Who needs to know it’s three o’clock, is it not enough to know it lavender? Why set your alarm for 6 when you can set it for citrus? And when the subtle aroma of juniper wafts through your home office, you know instinctively what is to be done.

In our modern world where it seems neigh one everyone is complaining about the pace of life, the pressures created by digital technology and the stress of contemporary etiquette, is time itself not becoming irrelevant? Do we measure our days by the clock. Or by what we still have to do? You know the answer. And if time is irrelevant, why not measure the passing of the day through a scale of aromas which support and motivate. Noticing that the hours are moving on causes stress, as an alternative how about fresh smells in the morning to get you going, a quick olfactory pick me up in the early afternoon and then tranquil aromas as you drift towards sleep.

Crafted from a concave copper plate with a self built clockwork system, Es liegt was in der Luft is both a well crafted, aesthetically pleasing object and a very nicely realised consideration on time; in which context we hope Patrick manages to realise his goal of finding an opportunity to let the clock run non-stop over a period of months, years – the passing of time being then noted not only by aromas but also the patina slowly forming on the clock face. Which might just remind us that time doesn’t pass quickly. We’re just trying to fit too much in. 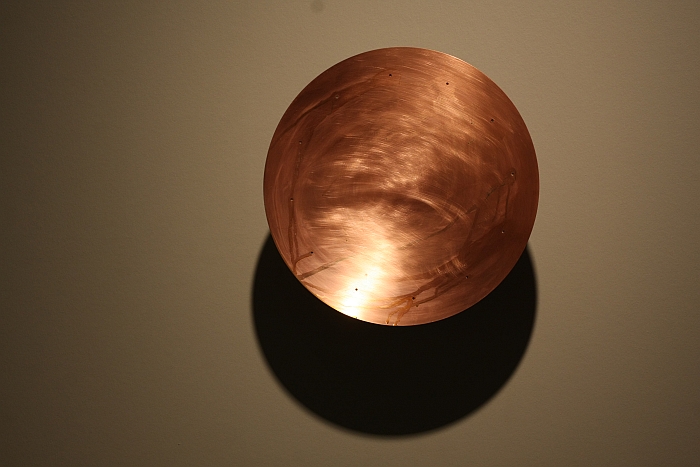 Es liegt was in der Luft by Patrick Palcic, as seen at the Pure Talents Contest, IMM Cologne 2017 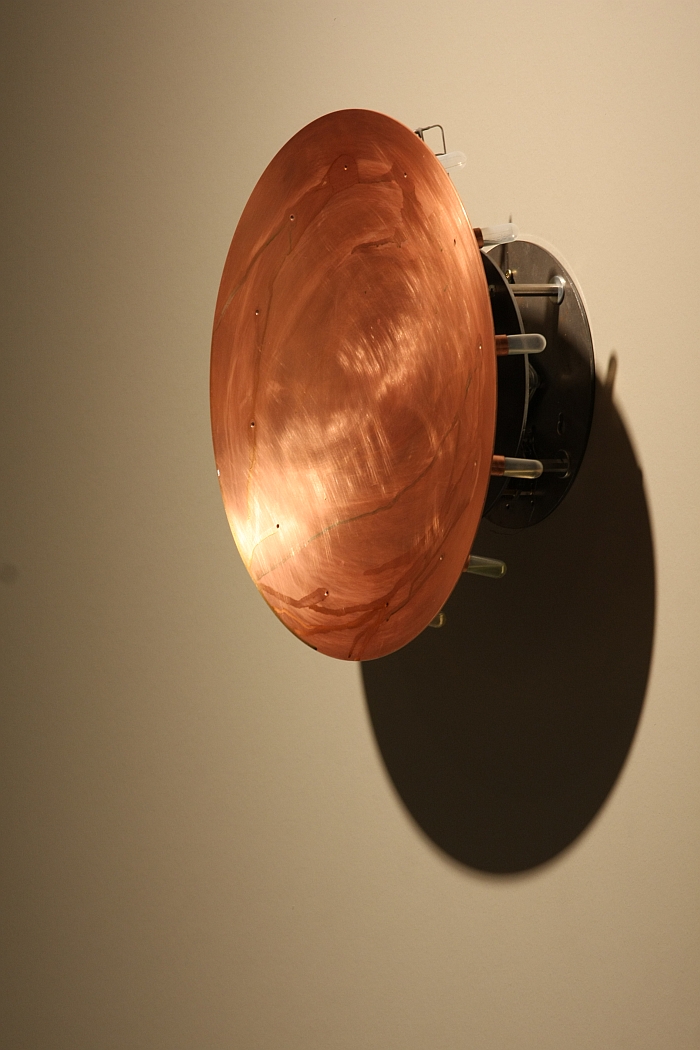 Es liegt was in der Luft by Patrick Palcic, as seen at the Pure Talents Contest, IMM Cologne 2017

The new Thonet S 1092 table by Randolf Schott from the Thonet Design Team began with the foot, or perhaps more accurately, the movement from the foot out and into the rest of the table. The result is a table and bench programme which impressed us for a number of reasons.

Although a solid, stout, piece of work the S 1092 has a visual lightness to it, you don’t feel dominated or intimidated by its scale. An effect that is perhaps partly due to the mix of steel and wood, and certainly due to the flow of the table top edge, which not only tapers as it reaches the end but the edge itself gently switches from an outward slope to an inward slope, featuring as it does a slight “twist” which confuses the eye and is very pleasing.

In conversation with an unnamed contact about the S 1092 they said they felt it was a little too wild, was too much happening in it. We couldn’t agree, for us there is logic to every element of the work and the overall impression is as harmonious as it is charming.

Based on the traditional monastic refectory table a central feature of the S 1092 is the traverse, which serves as the most natural of foot rests: you’re feet automatically land on it. While the bentwood end sections not only provide a nice link to the finest of Thonet traditions, but also means they don’t get in the way.

The full programme includes three benches of which the S 1094 with its low, or perhaps more accurately put, suggested, backrest impressed us most. Giving as it does the very real impression of a backrest you have something to sit up against and thus receive the stability and security a backrest offers, with the freedom and flexibility a backrest free bench offers. And also have somewhere to support yourself, to place your hands. Something very important, should your stay at the table become extended. 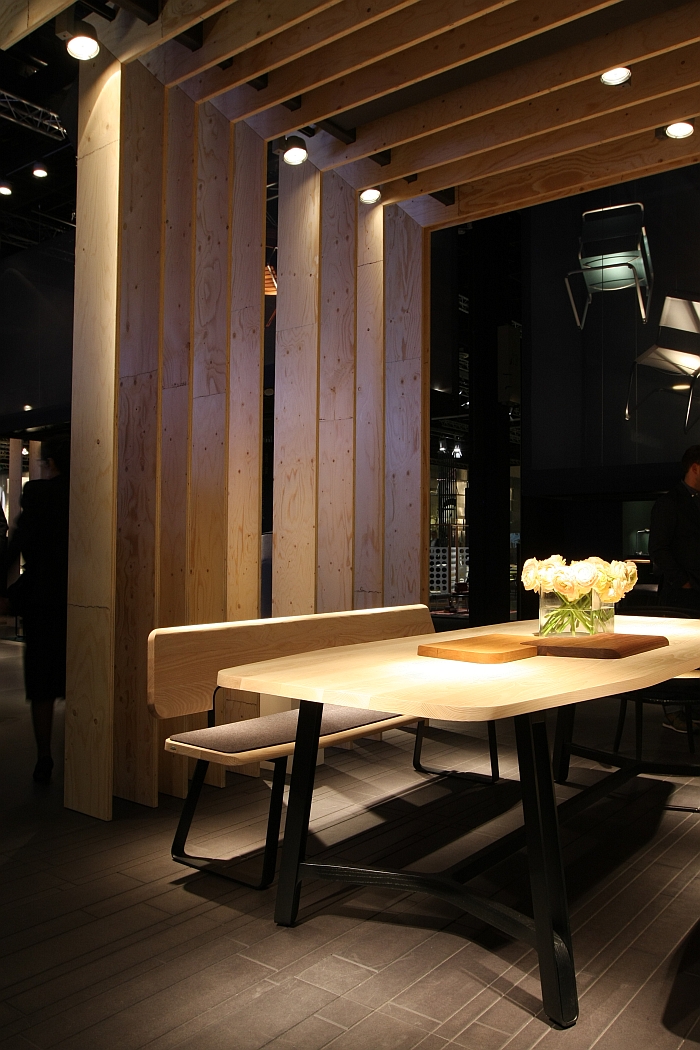 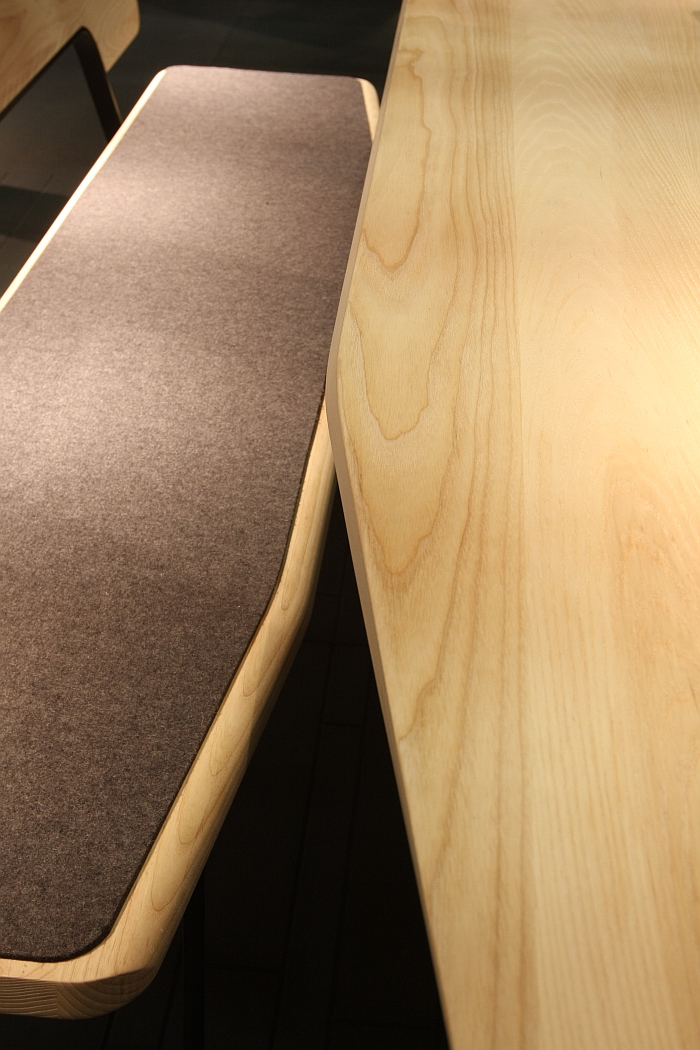 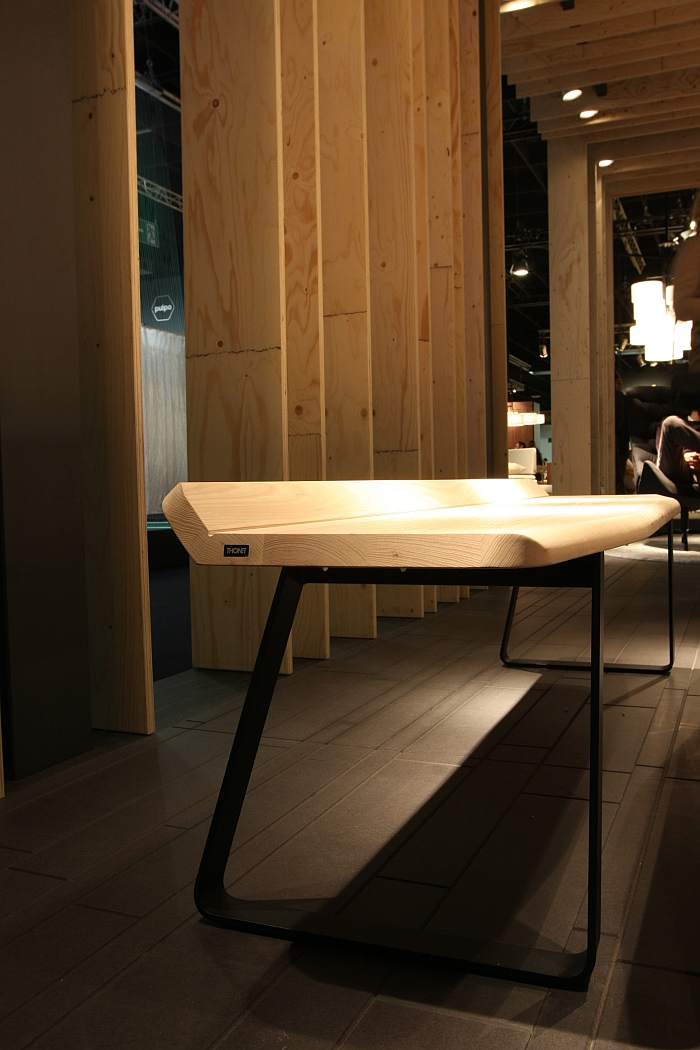 Belgian manufacturer Vincent Sheppard first caught our attention with the project Wicked by Alain Gilles and Jessy Van Durme which made it into our Biennale Interieur Kortrijk 2016 High Five!! If we’re honest the Loop Lounge Rope probably caught our attention because it looks like the sort of object a brash young designer would make in plastic, as an ever so ironic homage on a traditional garden chair: in this case the form being very reminiscent of a generic wicker armchair. However, having attracted our attention it continued to impress.

Originally launched in 2016 as the Loop Lounge, the new Loop Lounge Rope features a seat and backrest crafted from a slightly thicker cord, or rope, and in our opinion provides a slightly higher level of sitting comfort than the thinner cord version. It also makes the backrest appear higher. Or at least did for us. Somehow. Sloping very slightly backwards the Loop Lounge Rope is a pleasingly wide, expansive chair, despite the armrests one has the space one needs to move, relax, and this space is neatly translated through the materials and construction into a very open and inviting form. And crafted as it is from powder coated aluminium the Loop Lounge Rope weighs basically nothing.

All in all a very accessible, universally applicable, garden chair with which it is very had to find fault. 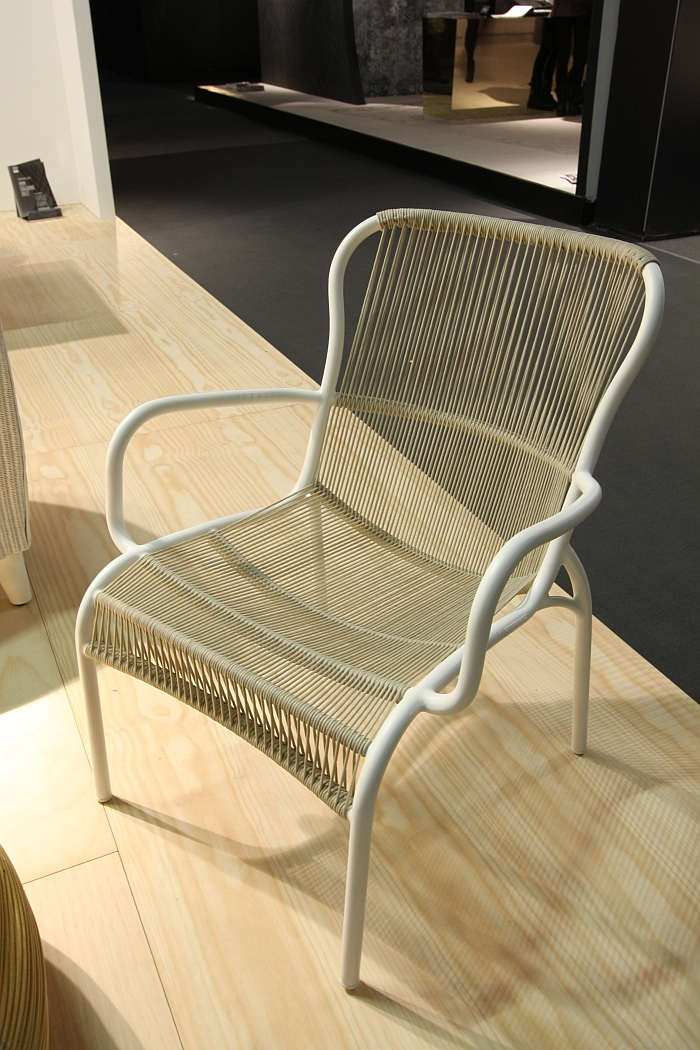 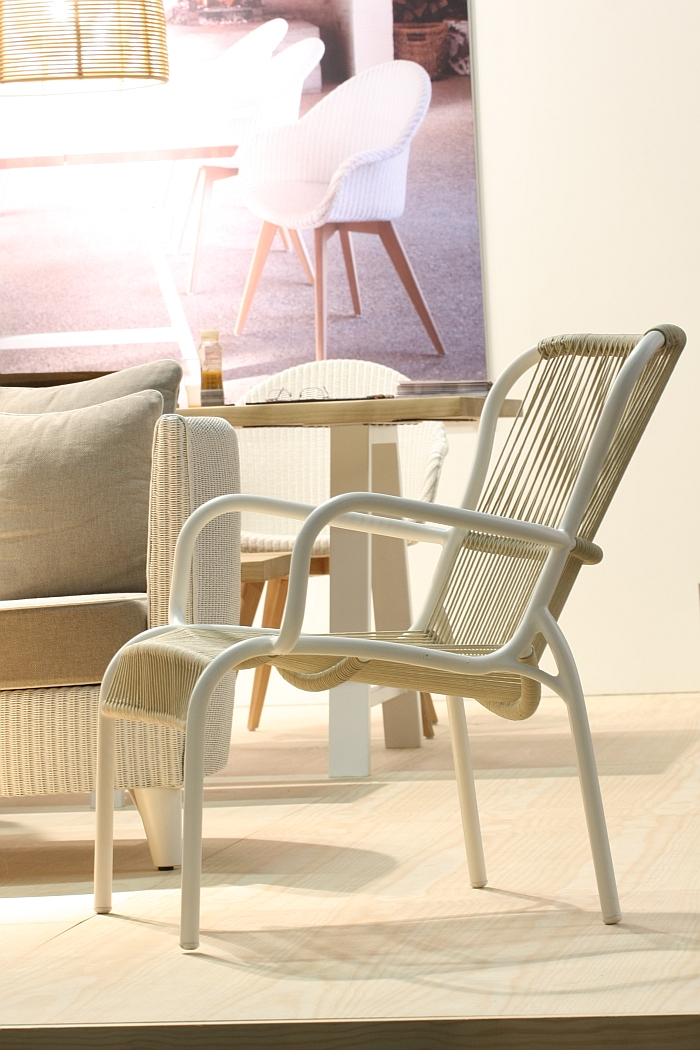 Designed in 1954 the TT 54 by Paul Schneider-Esleben is no new design. However that the furniture industry of 1950s Germany didn’t see fit to produce it and thus allow 1950s Germans to buy it in large numbers, Stuttgart based manufacturer Richard Lampert can. So that you all can. German or otherwise. Quite aside from being a wonderfully pared down and delightfully proportioned object, the thin metal frame neatly complimenting the wicker seat and backrest to create an object which emits the most perfect harmony, the TT 54 fits effortlessly into the Lampert collection. So effortlessly we didn’t even notice it. Had to be introduced to it. On the one hand it fits on a personal level, Paul Schneider-Esleben was friends with Egon Eiermann, and thus with the architect and designer who forms the central facet of the Lampert collection, but most importantly formally; with its open, honest charachter and lightness of construction, in many respects the TT 54 couldn’t be anything other than a Richard Lampert chair. And we like that.

A stupidly simple chair the TT 54 is despite its advanced years a very contemporary piece of work which wonderfully transits the hope and optimism of post-war Europe into our own troubled times. 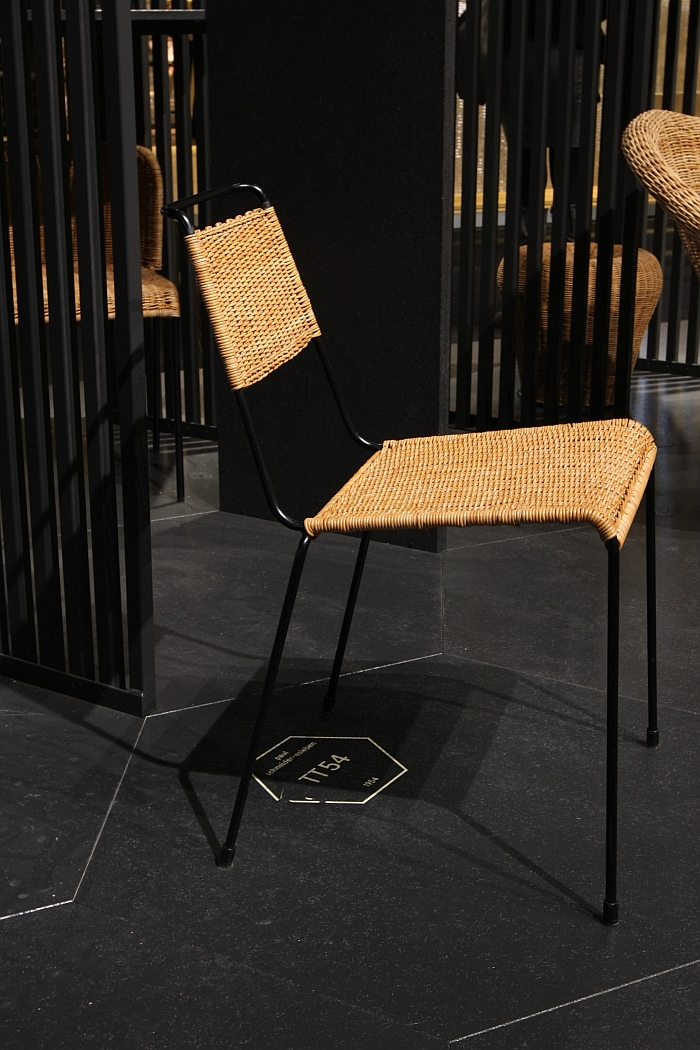 TT 54 by Paul Schneider-Esleben through Richard Lampert, as seen at IMM Cologne 2017 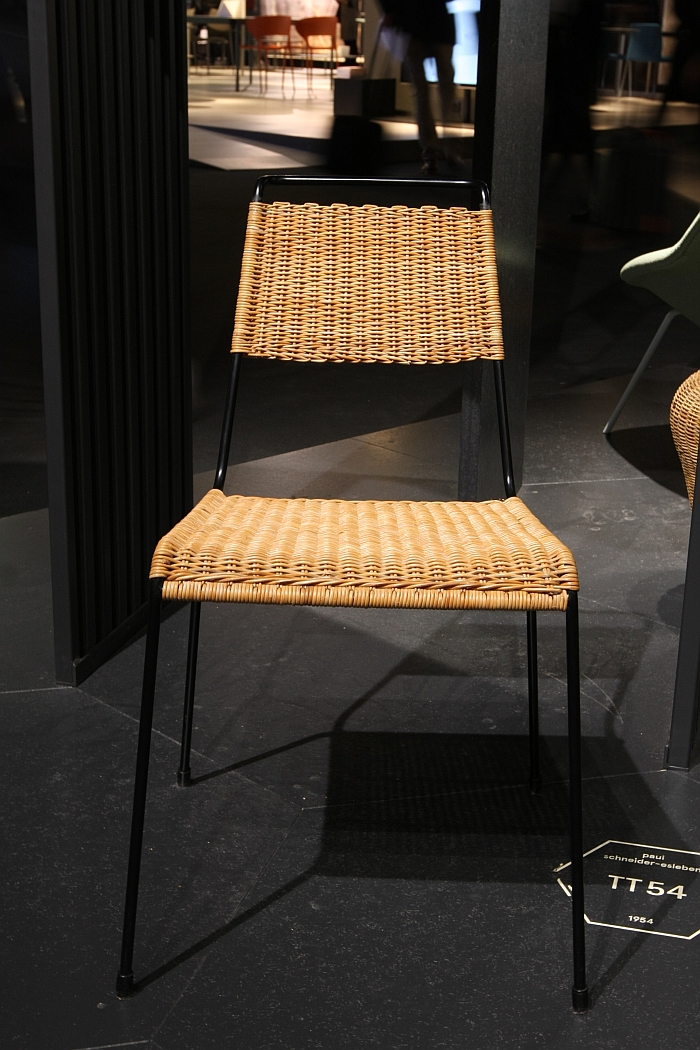 TT 54 by Paul Schneider-Esleben through Richard Lampert, as seen at IMM Cologne 2017

On first viewing Scala we were reminded of several wooden shelving systems from the 1950s and 60s, and that was also in many respects Tim’s intention; taking such wooden systems as his inspiration he sought to create something which kept the craft but switched material, to, if you will, imbue such objects with a slightly more industrial feel. And in our opinion has achieved a most agreeable product.

Scala is a perfect example of that.

Suitable for domestic, commercial or public spaces Scala uses the lightness of sheet steel to hide its stability and bulk; in many respects a classic rationalist object, the form is guided as much by the material reduction as it is by the functionality. Available in a range of heights and widths and as a free standing or wall mounted system Scala offers a choice of metal, wood and glass shelving in addition to storage boxes, and thus exists as a highly flexible, adaptable system. And of course being as it is a Müller Möbelfabrikation object is available in any RAL colour.

In the past we have oft opined that Müller Möbelfabrikation are not the sort of company who are ever going to do anything revolutionary, but rather through a concentrated focus on that which they understand and do best will continually realise interesting and practical contemporary furniture objects which exist beyond that which others can realise.

Scala is a perfect example of that. Nothing especially new. But most agreeable.

Scala by e27, Tim Brauns for Müller Möbelfabrikation, as seen at IMM Cologne 2017

Scala by e27, Tim Brauns for Müller Möbelfabrikation, as seen at IMM Cologne 2017