On March 10th 2015 a jury at the Central District Court of California in Los Angeles concluded that Pharrell Williams and Robin Thicke had relied a little too heavily on Marvin Gaye’s 1977 hit “Got to Give It Up” when composing their track “Blurred Lines”. For infringement of Gaye’s copyright the court ordered Williams and Thicke to pay Marvin Gaye’s estate $7.4 million dollars.

And to a degree he has a point.

The history of music is a history of taking concepts developed by one composer and developing them further, of being inspired by other musicians. Those who go their own way either being lauded as genii or damned as fools.

Which of course got us thinking….. 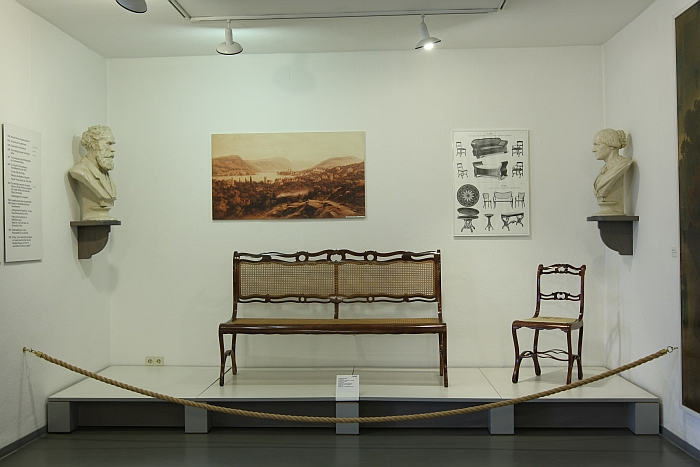 The so called Boppard Bench by Michael Thonet from ca. 1836

As a prime example of furniture design’s traditions, the father of the modern furniture industry Michael Thonet began by re-creating established forms of the day; a training which helped him develop his own understanding of form, aesthetics and functionality, before with his 3D steamed bentwood forming he created not only a new process for industrial chair production but with the subsequent Chair 14 one of the most successful and popular chairs of all time. In a similar vein the Godfather of Danish modernism, the architect and furniture designer Kaare Klint, was firmly of the opinion that historic furniture models provided everything that one needed for developing modern, functional furniture, one just had to develop them further and in context of the modern age. A position his pupils, including Hans J Wegner and Børge Mogensen, more than eloquently demonstrated in many of their own works. And which is continually demonstrated by contemporary designers. Konstantin Grcic‘s 360° Stool for Magis, for example, must be considered more as a development of George Nelson‘s 1964 Perch in a new material and for a new age, than a new product genre per se, while according to Italian manufacturer Mattiazzi Jasper Morrison‘s Fionda chair is inspired by a Japanese camping chair owned by Morrison: a quick look at Snow Peak’s Take! chair being sufficient to understand what is meant. And where would contemporary design be without the Shakers? A religious sect they may be, but their simple approach to architecture and furnishings has inspired, and continues to inspire, untold designers and architects.

Aside from being inspired by individual objects or product genres, designers are also regularly inspired by the way their contemporaries use production processes, just as musicians are regularly inspired by the way their contemporaries use new technology or new understandings of rhythm and composition. Michael Thonet’s 3D steamed bentwood process, for example, owes more than a passing note of gratitude to boat building, while Alvar Aalto was famously introduced by his business partner Otto Korhonen to a plywood moulding process used by Tallinn based manufacturer Luterma for the production of tram seats. Recognising the potential of the process Aalto took the Estonian methods and developed them further – technically and formally – applied them in context of site specific commissions and created something new, and something which itself went on to provide inspiration for the likes of Marcel Breuer, Charles Eames, Eero Saarinen, Egon Eiermann, Arne Jacobsen and neigh on every designer since.

On the left a 1940s chair by Børge Mogensen. On the right an 18th/19th century English Windsor style chair

A further parallel with the music industry is that just as most commercially successful musicians generally arise from a scene of artists doing very similar things, so to does one regularly find several designers working on similar concepts at the same time. Some with more lasting success than others. Such can be considered the case with, for example, the cantilever chairs of Mart Stam, Marcel Breuer, Mies van der Rohe and the Brothers Rasch. All knew one another, yet all developed their own projects according to their own understanding of aesthetics and how best to solve the problem at hand. Similarly, Hans Knoll allegedly almost didn’t release Harry Bertoia’s Diamond Chair because of the similarities to the Eames DKR Wire Chair and his fear that people would accuse Knoll and Bertoia of copying the Eames’s and Herman Miller2. Even though there was no suggestion that they had. Egon Eiermann and Wilde + Spieth had no such qualms with the SE 3 from 1949, a work known today as the SE 42, and a work that bears a more than passing similarity to the Eames DCW, yet which was, as with Bertoia’s Diamond Chair, developed independently of the Eames’s, if with knowledge of what they were doing; and where importantly, and as Arthur Mehlstäubler is at great pains to point out, when one looks at details such as the way seat and frame are connected, the formally more open Eames construction compared with the more compact Eiermann chair or indeed simply the number of legs, the differences can be considered to outweigh the otherwise apparently obvious similarities.3

Then of course there is genuine homage, works which don’t claim to be anything but a loving eulogy to an existing work. Franz Volhard‘s table Egon through Nils Holger Moormann, for example, is a cheeky, self-confident solid wood reinterpretation of Egon Eiermann’s classic tubular steel table frame: and one which through its unmissable, almost overly obvious, simplicity serves to underscore just how good Eiermann’s original idea is and was. Or Rudolf Horn’s 1962 Conferstar Club Chair, a chair developed because Rudolf Horn found Mies van der Rohe’s Barcelona Chair so uncomfortable, and was so disappointed by the sitting experience, he felt almost honour bound to improve it. 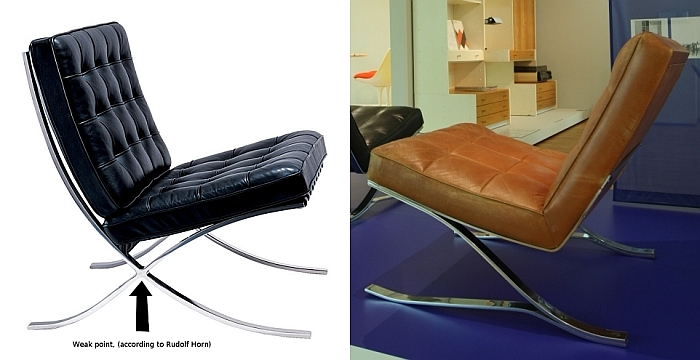 Pure plagiarism is, naturally, another thing altogether. Not only because plagiarism denies creatives the rightful rewards of their work, but, and at least in terms of furniture if not music, the copies are often not only inferior quality, but potentially dangerous, as our smow Australian cousins recently demonstrated with their Tolix stool tests.

However, as all the above examples indicate, the line between inspiration/homage and plagiarism is very, very fine.

Pharrell Williams and Robin Thicke continue to argue that they haven’t crossed that line and have formally requested a retrial. Their lawyers see hope for a successful appeal based on the fact that the jury were only supposed to asses the sheet music versions of the two compositions, were however played both tunes and so, potentially, formed their opinion based on what they heard not what they read. A small but important difference, also in context of the furniture industry.

The score is how a song is constructed, contains the musician’s intentions, explains the relationships between the various components and gives an indication as to how competently, or otherwise, the composer masters the essentials of their craft: the audio version is how it is subsequently styled, a process generally not undertaken by the songsmith alone but rather in cooperation with a producer, engineer and record company.

Similarly with furniture what one generally buys is the styling; only very rarely is the final market version an exact 1:1 replication of the designer’s original version, but is invariably an industrial producible adaptation created in conjunction with the manufacturer. And, yes, and as with music, when the publishers intention is profit over content this tweaking can all to often be aimed towards creating an end result that conforms to a current standard and/or a particular lifestyle t***d.

However, and ignoring for the time being such unpleasantness and the monotony that results, the construction principle on which the project is based, the choice of material, the intention and inspiration behind the original idea and the competence, or otherwise, with which that is then developed into a finished model, that is the real work that a designer undertakes: and ultimately is the difference between a copy and an original.

A copy lacks any sense of authorship, any semblance of character, being as it is simply a soulless generic construction conferring the visual impression of a successful designer piece and an object created purely to confuse the unwary into believing they are buying something other than that what the ultimately receive. A cynical ploy to blur the lines and make profit at the expense of others.

And so, and to come back to our original question, what if Pharrell Williams and Robin Thicke designed furniture? 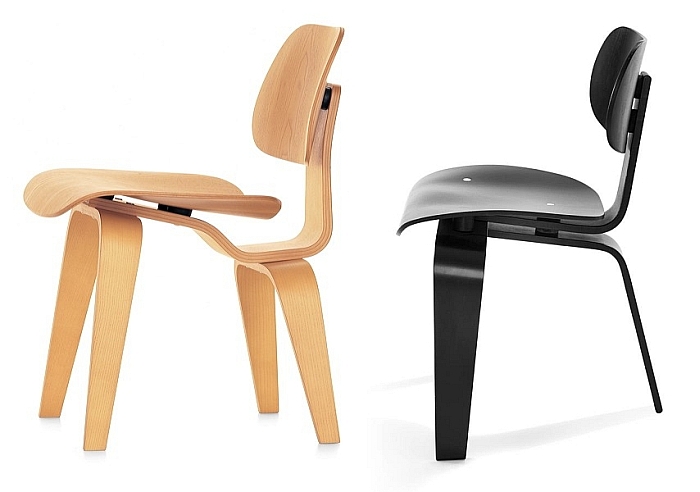