In the past we have, admittedly, been “somewhat” harsh on Chemnitz. Unfairly so considered some. Many.

“C’mon! Chemnitz isn’t all that bad!!!!” being the general response.

And so we decide to investigate a little more closely, to peer behind our prejudices and explore contemporary creativity in Chemnitz.

Initiated in the context of a research project at the Chemnitz Technical University silbærg snowboards make use of so-called Anisotropic Layer Design, A.L.D., technology to create a new genus of snowboard. In short: the silbærg boards respond to shifts in the rider’s weight placement. When carving the front edge of the board bends downwards into the snow thus improving the control. In free ride or park situations the edges curve upwards, reducing the surface area in contact with the snow and thus both smoothing the ride and increasing the momentum.

An innovation that has not only captured the imagination of boarders and earned the company critical acclaim, but which has also been rewarded with numerous awards; most recently the silbærg Carvomat pro carbon winning a Plus X Award for its innovation, high quality, design and functionality. At the 2014 Plus X Award silbærg were in addition recognised in the “Most Innovative Brand” category.

A relatively recent innovation the principles of A.L.D technology have been the subject of numerous, largely theoretical, research projects, projects which have rarely if ever extended beyond the prototype phase. The silbærg snowboards are, according to silbærg, the first serial product to utilise such technology. We have no way of checking that statement. But also see little reason to doubt silbærg.

We recently met up with Jörg Kaufmann, CEO of silbærg and initiator of the project, to find out a little more about the technology, the boards and Chemnitz as a location for such a technology company, but started by asking, what came first the desire to develop a new snowboard or the search for a use for A.L.D. technology?

Jörg Kaufmann: I’ve been boarding since 1995 and the more knowledge of and experience with engineering I gathered the more the desire grew to combine the two. The chance then came in context of my Doctor thesis where I am involved with so-called anisotropic coupling effects, which, in effect, is to do with how certain materials bend. We undertook deforming trials with fibre-reinforced composite sheets and as I saw how they could be deformed it was clear that we should try to apply such technology to snowboards.

(smow)blog: Anisotropic coupling effects and fibre-reinforced composite sheets are not concepts most people will understand. Without giving too much away, what is the secret of the boards functionality?

Jörg Kaufmann: The secret of the technology lies in the alignment of the fibres in the snowboard. A normal snowboard has machine produced fibre intermediates, our boards have fibre intermediates comprising up to 40 separate pieces all of which are hand produced here in Chemnitz, and the alignment of the fibres and the hand production makes the difference and causes the unique effect.

(smow)blog: Sounds simple! But what were the main problems in the development?

Jörg Kaufmann: The effects that we generate in the board are temperature dependent, as such reaching a state where the boards could be pressed without deforming was very complex. And generally the optimising of the effect was a long process because it involves counter rotation, and getting that right, understanding how that works, was a very intricate process. In the course of the development we tested over 1000 models in computer simulations, with traditional prototype construction and testing we would still be at the prototype phase.

(smow)blog: But eventually you must take the boards out on real hill……?

Jörg Kaufmann: Yes, we tested in Zermatt using anonymised white boards, a mix of “our” and “normal” boards. The test team was comprised of ten boarders who tested each board and completed an evaluation form after each ride. The subsequent analysis of the data produced the unequivocal result that the boards with the A.L.D. technology were better the conventional boards. Results that supported the gut feeling that all our testers had had, and which made it clear that we would have to form a company and produce the boards commercially!

(smow)blog: And what was easier to develop, the board or the company?

Jörg Kaufmann: Very good question! The development of the board took six years, and I knew that the development of the brand, establishing a position in the market and internationalising the brand would be difficult. And it is and has been!  However it is also a lot of fun, and it is wonderful feeling to develop your own product, your brand and to experience the delight and satisfaction of the customers.

(smow)blog: Most snowboarders of course don’t want to just ride well but also look good. How much attention do you pay to the form of the boards?

Jörg Kaufmann: At the moment the individual fibre intermediates are made by hand here in Chemnitz and the boards themselves are then pressed in Austria by GST, one of the leading snowboard manufacturers; and so currently we are in the fortunate position of being able to rely on their 20 years experience and use their forms. However the form of the board is, as you say, an important aspect, also in terms of brand identity, and is something where there is definitely room for further development. We are currently working on developing our own shapes, but won’t release them until they are as perfect as our A.L.D. technology.

(smow)blog: “Further development” is a nice keyword….. you started in Chemnitz because you were here. If things continue to grow and develop can you stay here, or…….?

Jörg Kaufmann: For us Chemnitz is a very good location and I see no reason why we can’t remain here. Not least because through the close cooperation with the TU Chemnitz, and for all with the Institute of Lightweight Structures, we have here the perfect partners. In addition, from Chemnitz we can reach the Alps relatively quickly, which is very important in terms of sales and marketing during the season, while with the nearby Oberwiesenthal ski region we have a perfect location for testing. In Chemnitz we also have a very good supply of highly qualified students, which is important for the further development of the product.

Jörg Kaufmann: Of course they can be used! At the 2014 German University Championships the TU Chemnitz student snowboard team riding silbærg boards won every gold medal in the Olympic disciplines of halfpipe, boardercross and slopestyle. Which I think is an answer in itself…….

Further details on silbærg snowboards can be found at http://silbaerg.com/ 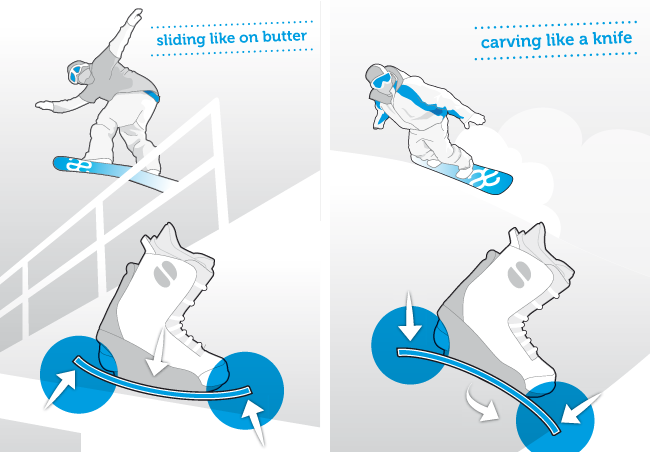