The Room of Desires @ Raumwerk Munich

It may lack the Unicorn Horn that graced so many Renaissance era Cabinets of Curiosities, but with The Room of Desires Keum Art Projects present a collection of objects with just as much beauty, mystery and grace as could be found in the Wunderkammer. And yet which are grounded much more in reality. 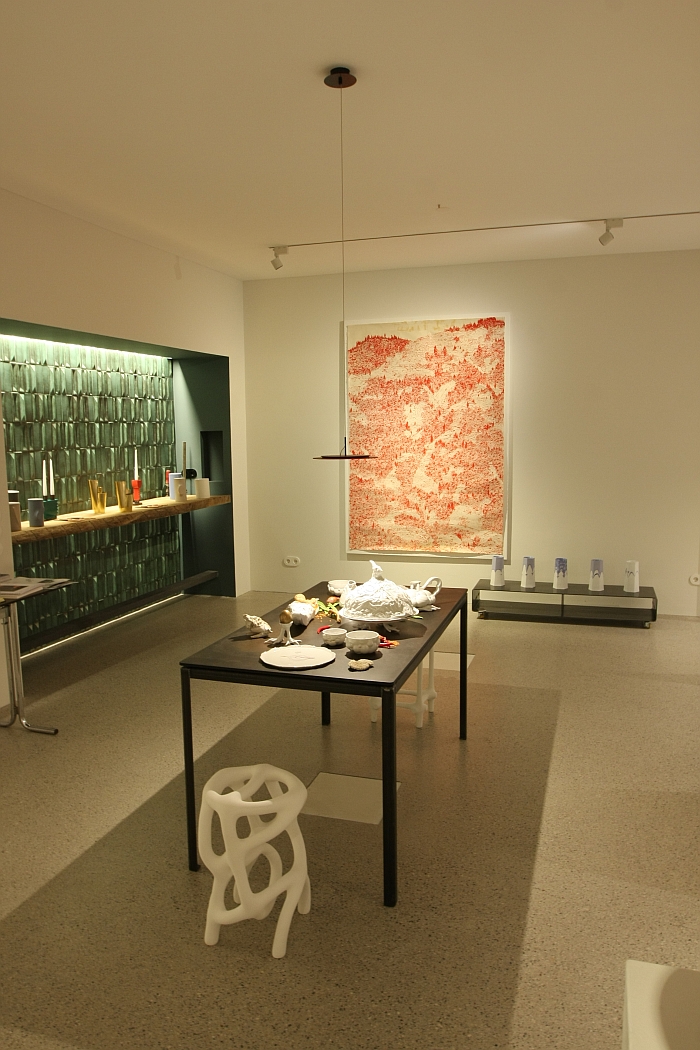 The Room of Desires @ Raumwerk Munich

Back in the day we once received an almighty thump from a very good friend for suggesting that the fact her mother had adorned their living room with so many pictures of the immediate family represented a deep insecurity regarding the stability of said family unit. Did not go down well. At all.

The tradition of surrounding ourselves with valuable and representative objects is however much older than the 20+ years we’re thinking back: for the rich, powerful, learned of Renaissance Europe, and those who wished to be seen as such, a Cabinet of Curiosities, a Wunderkammer, was de rigour. Essentially collections of objects from across the natural, scientific, artistic and ethnographic worlds, the Wunderkammer with its mix of the foreign, fashionable and fantasy was a reflection of not only the owner’s status, but of his control over and understanding of the world.

In Korea an alternative version of the Wunderkammer developed, the Chaekgado, a form of painting which presented the owner’s books and prized possessions, normally in abstracted and foreshortened perspectives, and which in terms of content and intention can be understood as a virtual form of the Wunderkammer: and thus, arguably, as a precursor of our contemporary digital world where we can all carry our personal, virtual Wunderkammer with us wherever we may roam.

With the exhibition The Room of Desires Berlin based Keum Art Projects celebrate the timeless tradition of the Wunderkammer and Chaekgado, and our abiding fascination with objects, materials and beauty. 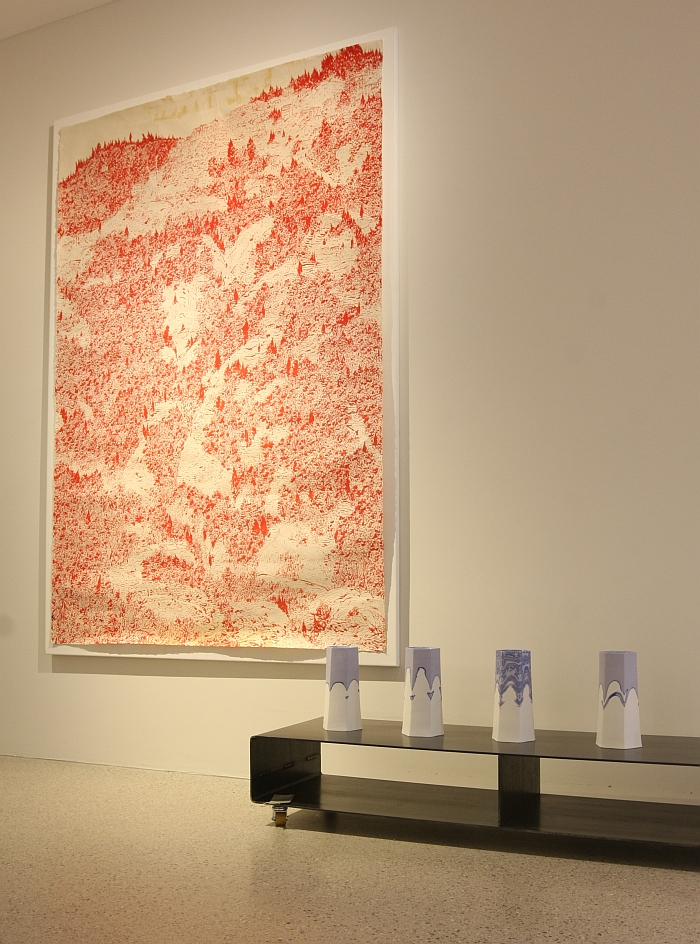 Vestige vases by Deokho Kim and Memory of India by Neung Saeng Park, as seen at The Room of Desires, Raumwerk Munich

The Room of Desires

Staged in the art and design concept store/gallery raumwerk in Munich’s Westend, The Room of Desires features projects by 17 designers, craftsfolk and artists, principally though not exclusively, from Korea and Germany, and presents a collection of objects which in many respects cover the five “classic” Wunderkammer themes of nature, science, art, the exotic and Mirabilia – the miraculous, unexplainable: thankfully absent are the overtones of power, superiority and vanity that all too often accompanied the Wunderkammer of yore.

In many respects this thankful absence is largely because whereas the Wunderkammer and the Chaekgado placed a central focus on the exclusivity of the objects, the works presented in Room of Desires are largely of the normal, regular, every day type: the wonder lying less in the object and much more in the material, construction and interpretation of cultural and social realities.

And that available to us all, be it in the form of, for example, Hyunsung Kim’s brass and wood butter knives, the Bestiarium porcelain collection by Maria Volokhova and Johanna Spath or Studio ilio’s Hot Wire Extension project which transforms waste nylon powder from the so-called Selective Laser Sintering, SLS, 3D printing process into objects, in this case stools, with a mineralesque aesthetic and tactility.

Among a wide variety of projects combining the exotic with the mundane, fantasy with substance and for all craft with design, two projects in particular caught our attention. 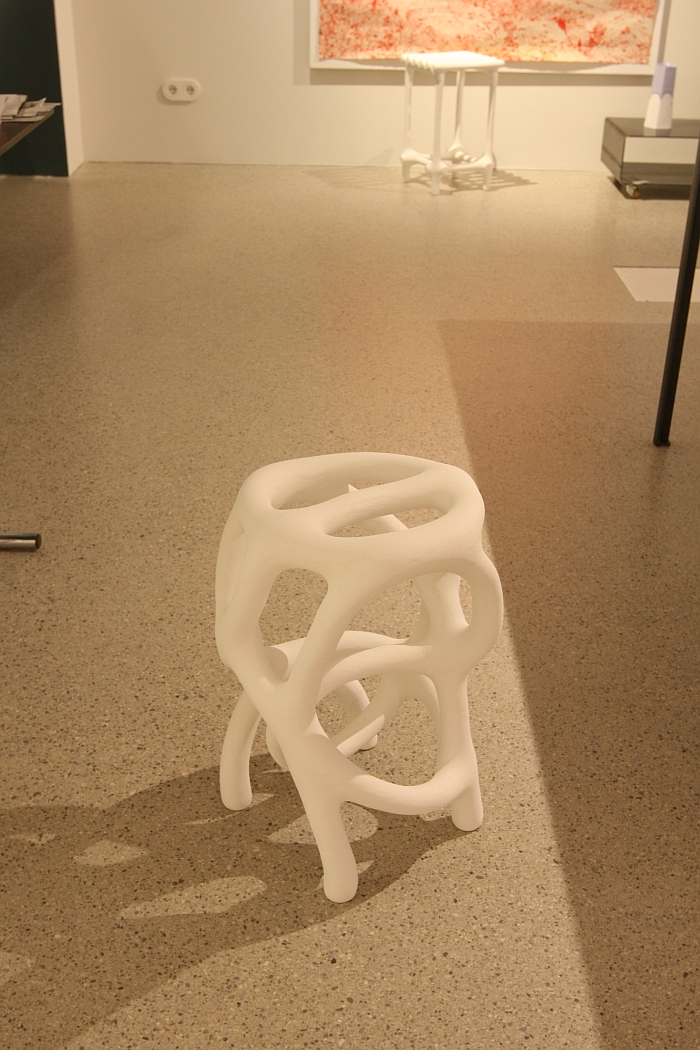 Hot Wire Extension stool by Studio ilio, as seen at The Room of Desires, Raumwerk Munich

Motivated by a decline in the traditional Korean Ott-chil lack technique, Design Academy Eindhoven graduate Seungbin Yang explored ways of not only honouring the work of past masters, but also making the process relevant for a new generation and thus preserving the tradition, albeit in a contemporary context. The result is 21g a collection of tableware which presents itself with all the grace and elegance of traditional Ott-chil work, offers users all the functional niceties of traditional Ott-chil work, but which rather than being based on wooden objects are crafted from paper, and thus objects which are much lighter and for all cheaper than traditional Ott-chil work. Quite aside from the very nice juxtaposition of high and low values and the interplay of expectation with reality, what appeals to us about the 21g collection is the unpretentious form language: one which comes, largely, from necessity of material and construction, and yet which has a very pleasing familiarity and ease. 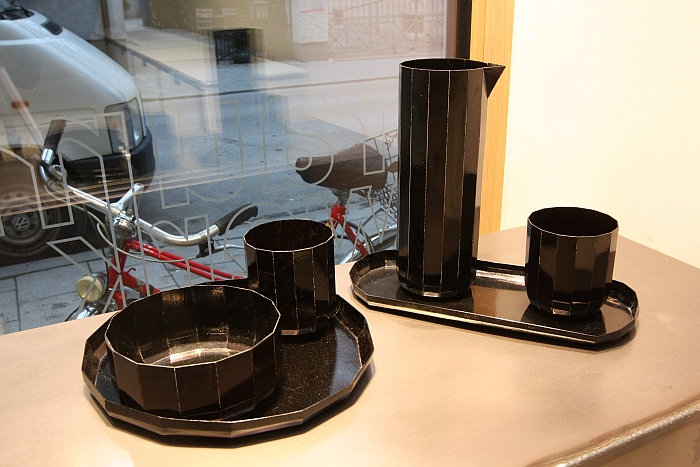 21g by Seungbin Yang, as seen at The Room of Desires, Raumwerk Munich

As we recently noted, “for us upcycling should, must, not only create an object of genuine value, integrity and longevity, but also carry the message of what it is doing with it. Not in a preaching sense, but comprehensibly.” Something Berlin based designer Andreas Berlin has, almost, realised with his Small Tables collection. And where he falls short has more to do with our definition than his work.

Constructed from vases found at flea markets and in junk shops around Berlin the idea in itself is arguably not completely new; however, in contrast to the innumerable “urban makers” who (would) simply attach one salvaged object to another, Andreas Berlin has crafted new objects and given them, if not a soul, then most definitely a sense of self-value and independence.

Standing outside raumwerk, considering them through the windows, we weren’t very taken, assumed them to be some wholly unnecessary and dangerous Art Deco revivalist glass project. However on learning of their genesis and then letting ourselves be drawn into them, following the lines as a series of individual objects brought together to create a final form, rather than a form defined 100% by the designer, understanding the logic of the misappropriation, we were slowly won over. They are, yes, still far too Art Deco for our taste, but that is not to distract from the quality of the work and for all the thinking that led to it. The fact that we had to have the concept explained to us does of course mean that the “carry the message of what it is doing” part of our definition fails. That could be our fail. We’re reconsidering.

Full details can be found at www.keumprojects.com 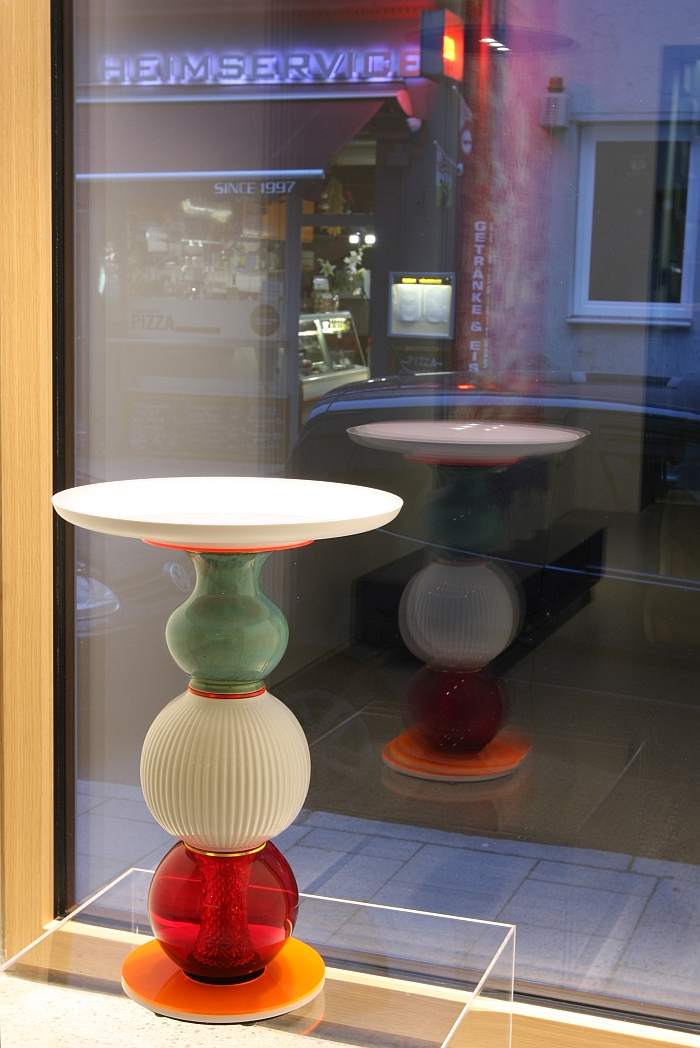 One of the Small Tables by Andreas Berlin, as seen at The Room of Desires, Raumwerk Munich 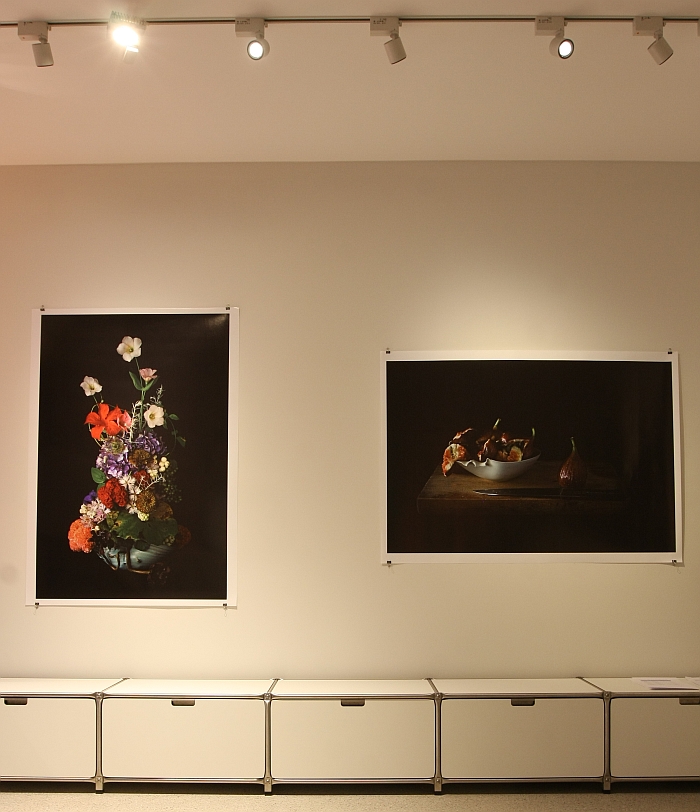 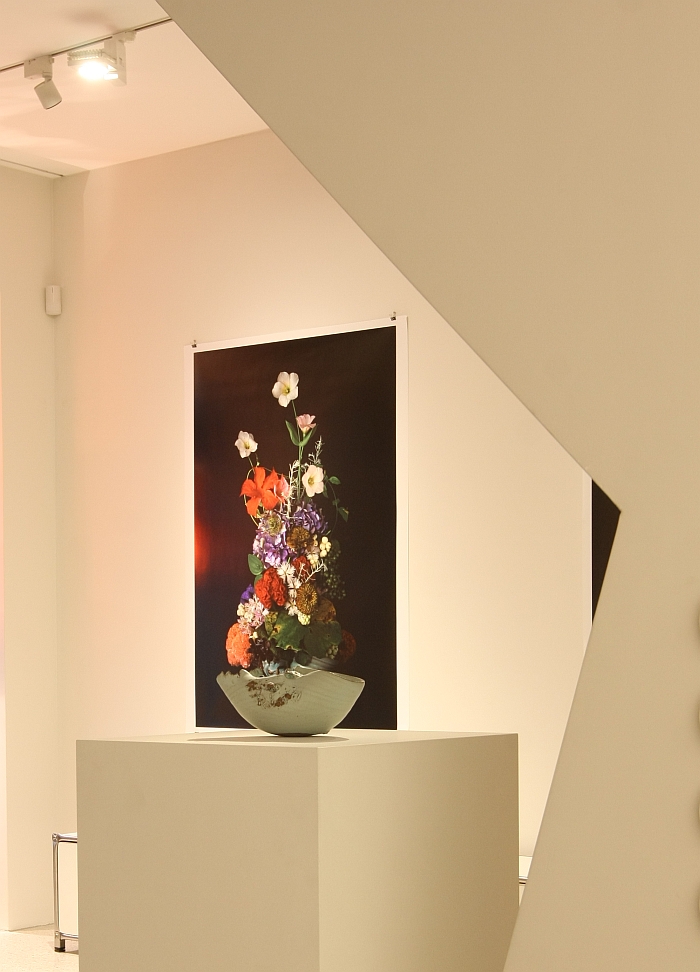 Or put another way…. 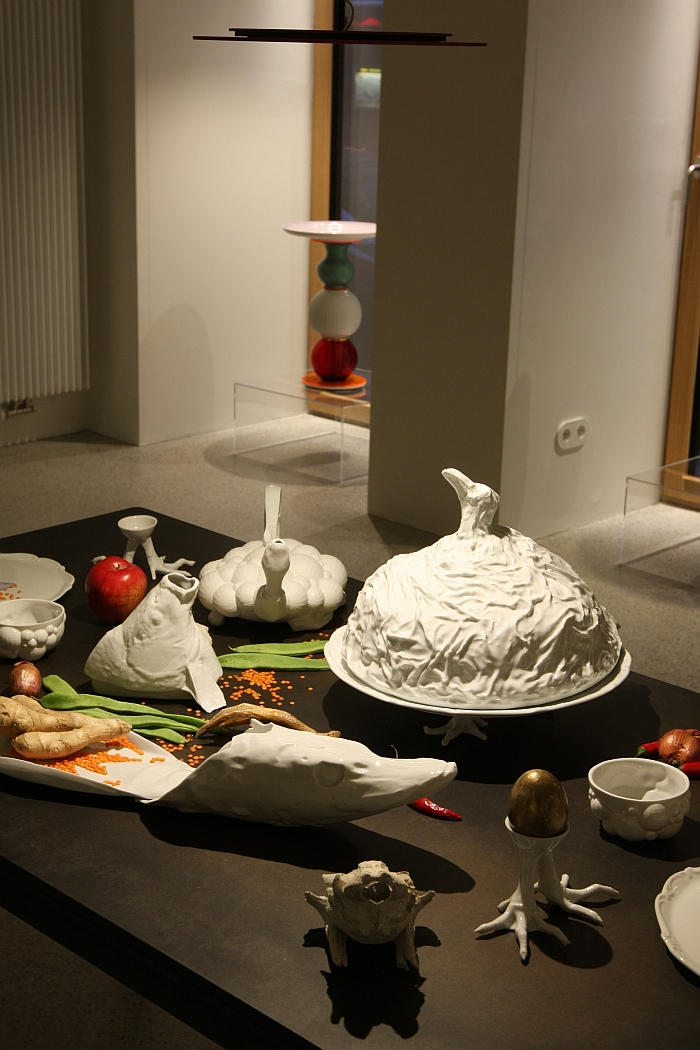 Bestiarium collection by Maria Volokhova and Johanna Spath, as seen at The Room of Desires, Raumwerk Munich 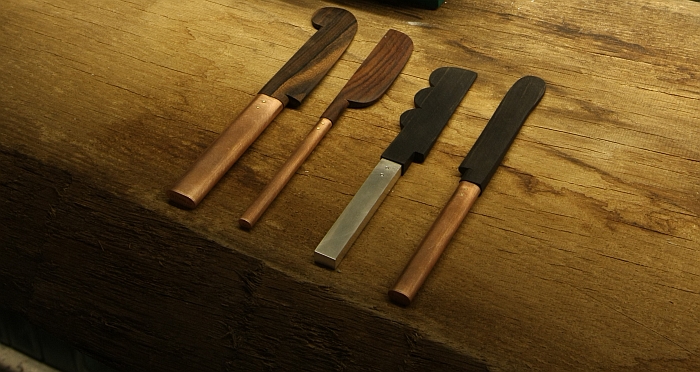 Butter knives by Hyunsung Kim, as seen at The Room of Desires, Raumwerk Munich