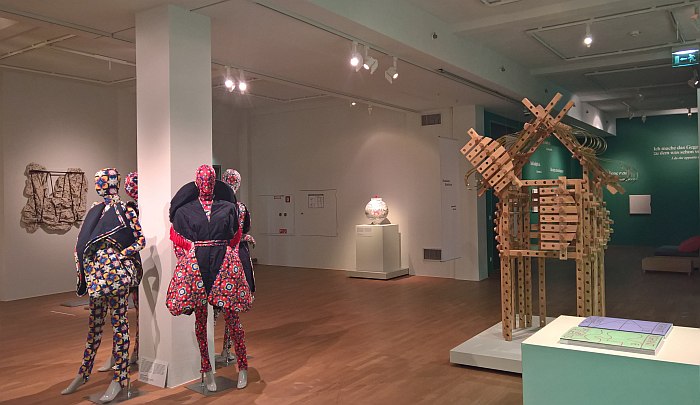 For as an exhibition Cultural Affairs. Art without Borders isn’t an historical exploration of how cultural exchange arose and progressed, there are no historical discourses on war, colonialism, disease, hunger, trade, curiosity, religion or any of the myriad other paths, cooperative, forced and/or aggressive, via which over the centuries cultures mixed. Or at least not directly.

An exploration undertaken via a narrative analogous to the three steps via which, historically, splendidly isolated cultures became global hybrids, and via which, today, cultural exchange arises: societies/individuals roam/ed, in doing so encounter/ed other cultures and from which interconnections and interrelations arise/arose. Albeit a development Cultural Affairs follows, as it were, backwards, from the latter to the former, opening with the chapter Global Entanglements, those global interrelations which require initial Transcultural Encounters that are themselves dependent on a World in Motion.

Which yes, could be considered counter-intuitive, and arguably also is; however, let’s run with it….. 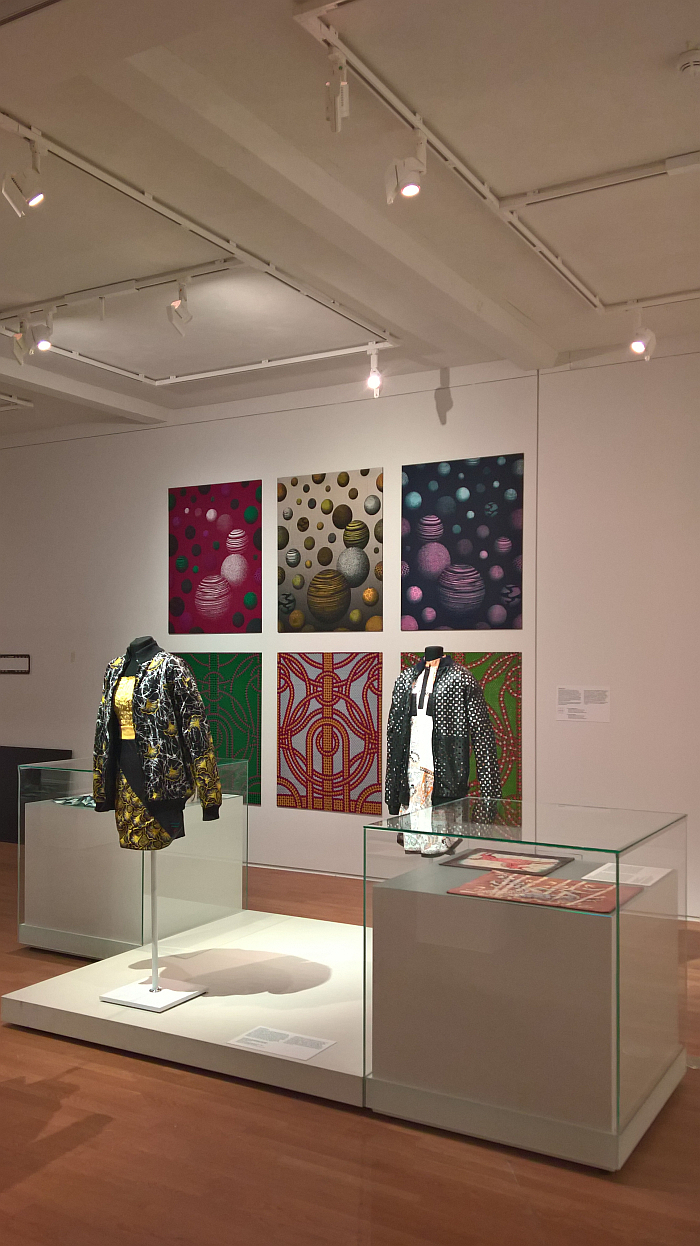 Clothing by HICECREAM aka Leipzig based Romeo OlaJoseph, and fabric designs by Simone Post for Vlisco, as seen at Cultural Affairs. Art without Borders Grassi Museum für Angewandte Kunst, Leipzig

Featuring some 60 projects by some 50 creatives from some 40 countries Cultural Affairs presents a mix of projects as conceptually borderless as geographically borderless, a mix of projects from the purely artistic to the much more commercial, a mix of projects from the one-off to the serial, a mix of projects from the speculative to the concrete: a mix of projects including, Flying 8, a self-build loom developed by Hamburg based weavers Natalia Möller-Pongis and Andreas Möller with the aim of increasing access to affordable looms and thereby opportunities for independent weavers; the work Trempé Dans Une Mer d’Acide from the Gravité collection by the Franco-Beninese ceramicist King Houndekpinkou who learned, or rather discovered, then learned, ceramics in Japan and who seeks to combine in his works what he understands as complimenting, analogous, elements and facets of Japanese and Beninese culture; or the project I AM ANGRY! by graphic designers Jihee Lee and So Jin Park which highlights examples of racism encountered, primarily, by Asians in Europe and which through making it visible seeks to both tackle racism but also provide a framework for victims to respond.

And thus a reminder that cultural exchange, as with the human movement and interaction that enabled/s such, isn’t always a process based on, or which always engenders, a mutual respect, isn’t necessarily undertaken in a spirit of harmony, doesn’t automatically lead to a better society. Despite all logic that it should.

That humans in our infinite wisdom manage to pollute cultural exchange just as much as we manage to pollute the planet we live on, air we breath, food we eat, internet we communicate via…… we really are geniuses, pinnacle of evolution???……being further underscored by an IKEA Vedbäk “oriental” carpet and the textile design project Destinations by students from Kunsthochschule Burg Giebichenstein Halle both of which explore aspects of cultural appropriation.

A question most prominent in the first chapter, Global Entanglements, with its discussions not only on the appropriation of textile patterns but also on, for example, Batik textile dying or Masks. Ritualistic, wooden, African not FFP2.

A question which although remaining very present as you move, as it were, backwards, counter-intuitively, over Transcultural Encounters and on to The World in Motion, becomes increasingly less prominent, increasingly becomes a background theoretical question rather than a foreground practical question.

A question whose (near) ubiquitousness in Cultural Affairs helps highlight not only that the border between appropriation and inspiration is exceedingly fine, but also that it is a border whose location isn’t fixed but which is subject to interpretation; an interpretation that historically has been the sole preserve of dominant societies, dominant sections of dominant societies, but which we are increasingly understanding is a responsibility for us all, collectively. How we resolve the transfer, time alone knows. But it’s not without risks. Given that humanity in its infinite wisdom is responsible for achieving it.

And a question whose (near) ubiquitousness in Cultural Affairs, and whose inherent complexity, helps elucidate that in contrast to what we all thought, the movement through the exhibition is far from counter-intuitive.

Much more the chosen direction from a moment when cultural exchange is at its most complex, including innumerable inherent, in-built, historical contexts, to moments where it is much more direct, individual, discernible, tangible, allows for a very logical framework within which to develop your own considerations on not just appropriation but the many and varied subjects and themes at hand; and for all allows one to reflect on those underlying mechanisms, processes and motivations of cultural exchange identified and presented by Cultural Affairs, including, amongst many others, Translations and New Perspectives, Building Bridges, Collaborations, Transforming Identities, or indeed Racism as an odious, avoidable, component of cultural exchange, in context of the complexity of multi-directional interactions as they exist in our contemporary global hybrid societies rather than as abstract concepts.

And which in doing so aids and abets the development of understandings of the place, function and relevance of cultural exchange, positive and negative, in, to and for not only contemporary art, craft and design, but in, to and for contemporary society. 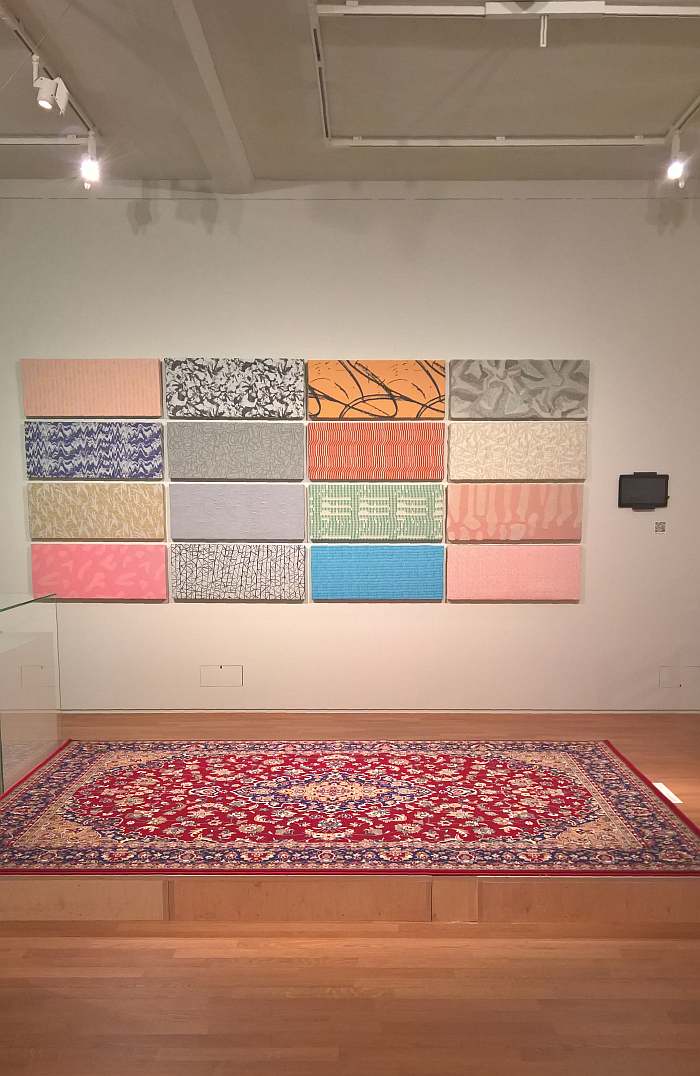 Complimenting the featured projects and their inherent questions, Cultural Affairs also presents a number of more direct questions; questions the curatorial team asked themselves while developing the exhibition and which, in many cases, were never fully answered, never satisfactorily answered, remain open for discussion and reflection, and which are presented in Cultural Affairs with the request that visitors do just that.

Questions such as How does multiperspectivity become visible in the exhibition? What social conflicts are addressed in the exhibition and what are not? How do we create transparency about who speaks and who makes decisions? Questions you very naturally and effortlessly become involved with while moving through the exhibition, and which through considering and attempting to answer allow you to, naturally and effortlessly, reflect more critically on the projects and the many and varied themes they represent and contexts in which they are presented.

In which context we’d argue that in one answer, i.e. our answer, to the question How can we build bridges between the collection and the present?, the Grassi Museum für Angewandte Kunst missed a trick.

(We) Missed the extension of the exhibition’s discourse into the permanent collection exhibition, a highlighting of objects in the permanent collection which present more historic takes on the themes and subjects tackled by Cultural Affairs in the contemporary, and thereby an elucidation that that the themes approached by Cultural Affairs aren’t new, alone the context is, an elucidation that that the underlying mechanisms, processes and motivations of cultural exchange identified and presented by Cultural Affairs aren’t new, that, for example, Translations and New Perspectives, Building Bridges, Collaborations, Transforming Identities, or indeed Racism aren’t new, alone the context is. And thereby an elucidation that the intrinsicness and inherentness of cultural exchange mean it will continue into the future as an important component of the development of our societies. Unless that is our increasingly staunchly defended geographic and personal borders, and our infinite wisdom, mean we contrive to suffocate it…..

And a discussion and context that, we’d argue, could be further deepened by an extension of the exhibition’s discourse into the permanent collection exhibition of the Grassi Ethnography Museum with whom the Grassi Museum für Angewandte Kunst share a building. That the Ethnography Museum’s permanent collection exhibition is currently closed for renovation and redesign sadly leaving such an extension in the theoretical, but were it possible it would allow, we’re arguing, for important, differentiated, reflections on that which is discussed in Cultural Affairs and its relevance to our contemporary and future societies. 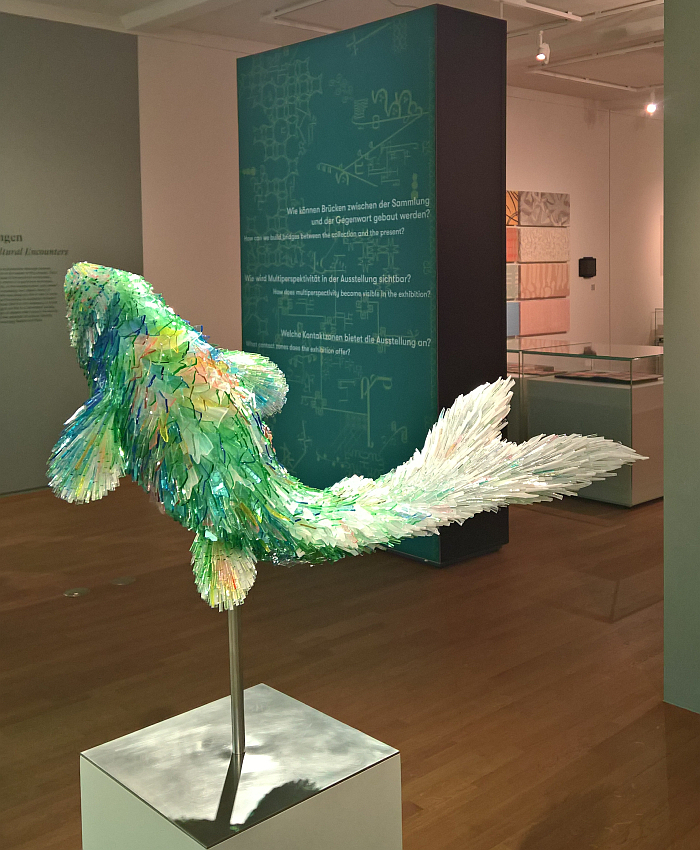 A well-paced and pleasingly varied presentation Cultural Affairs leaves the vast majority of the work to the visitor. Which isn’t a criticism. Far from it, we’re very much in favour of making museum visitors actively think rather than passively view. And with its brief bi-lingual German/English texts, and bi-lingual German/English questions, Cultural Affairs neatly sets up discussions and demands the visitors continue them through the works on show.

If we did have one criticism it would be that at times the brevity of the texts leaves them running the risk of normalising that which should should be anormal. Specifically the almost celebratory manner in which visitors are informed that 19th century Dutch industry appropriated Indonesian Batik with the intention of undercutting local producers with cheap industrial imports. Or the very matter of fact way visitors are informed that the ubiquitous Red-White-Blue bag is derogatorily nicknamed in most all countries of the world after a people considered inferior, in some way non-native, as migrants in a negative sense; and while that is a fact, it can’t be a fact anyone considers we should maintain going forward. Surely ??? “China Bag”, we know, but ¯\_(ツ)_/¯

If we did have two criticism it would be the description, and again in the discussion on Batik, which might not be a coincidence, that in the 19th century the, then, Dutch East Indies was “considered a colony of the Netherlands”. Considered? By whom?? It was. The clue’s in the name. Or is it “considered” rude to remind the Dutch of their colonial past?

If we did have three or more criticism….. but we don’t. Or least not that are worthy of boring you with.

And even if we did, the nature of the presentation and the implicit encouragement to actively think rather than passively view allows you to neatly sidestep such moments and/or incorporate them into your considerations and reflections; considerations and reflections on not only contemporary cultural exchange in context of contemporary art, craft and design arising from, and in context of, contemporary human mobility, but also on where our global society could be, to where our global society could develop, if we approached our global interactions with the innocent joy of a toddler racing off in ever new directions, if we approached our global interactions with the intuitive understanding of a toddler as to what a powerful tool mobility is. Can be.

Full details can be found at www.grassimak.de/cultural-affairs 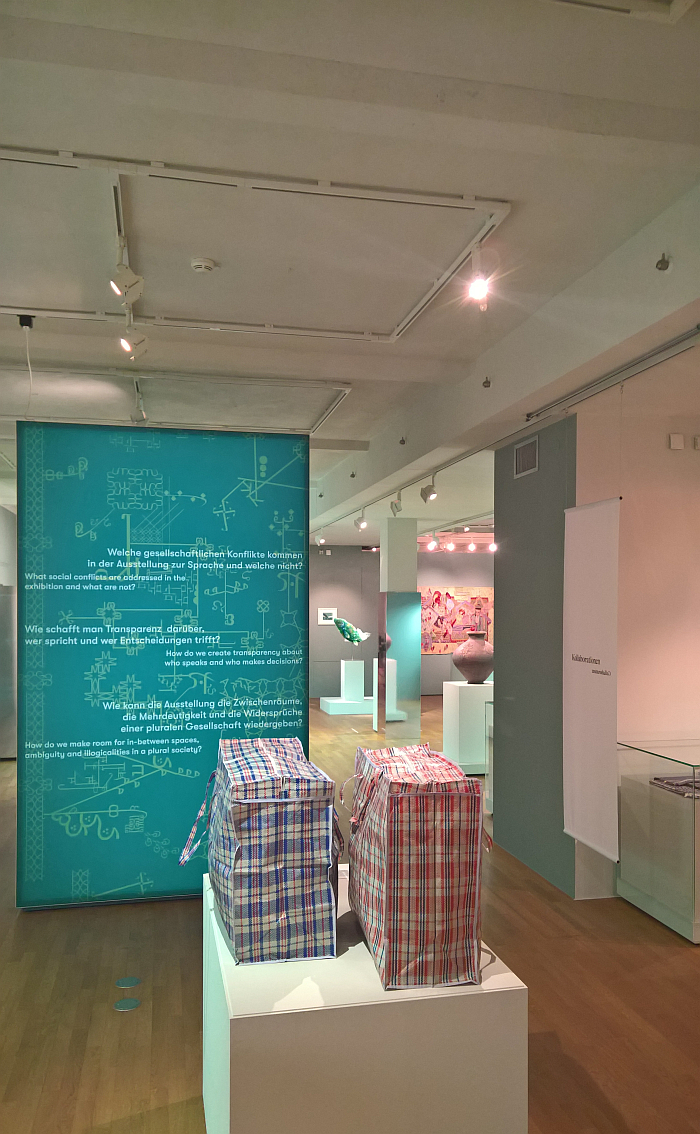 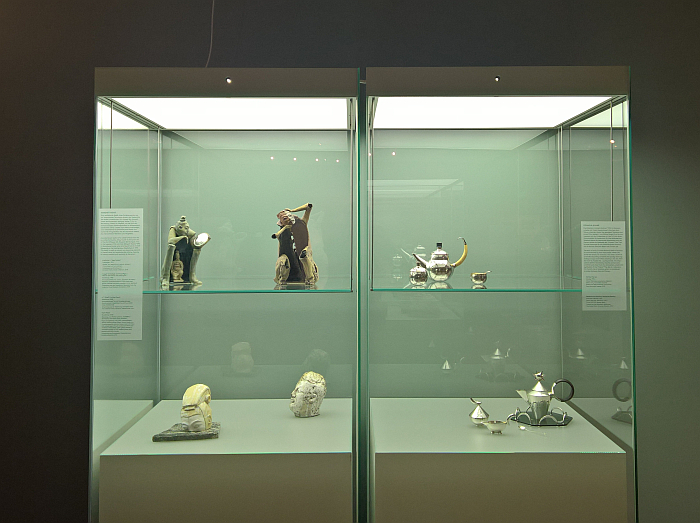 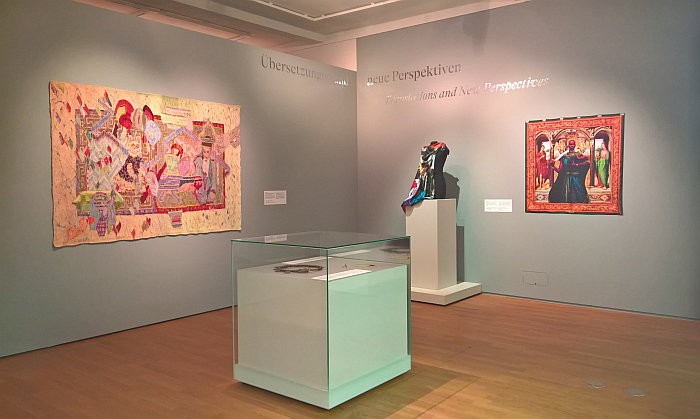 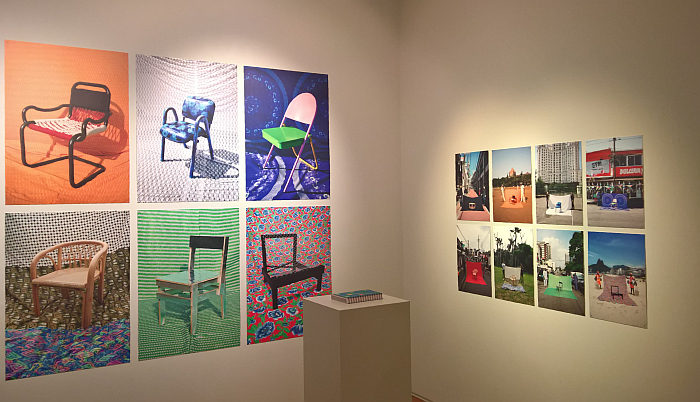 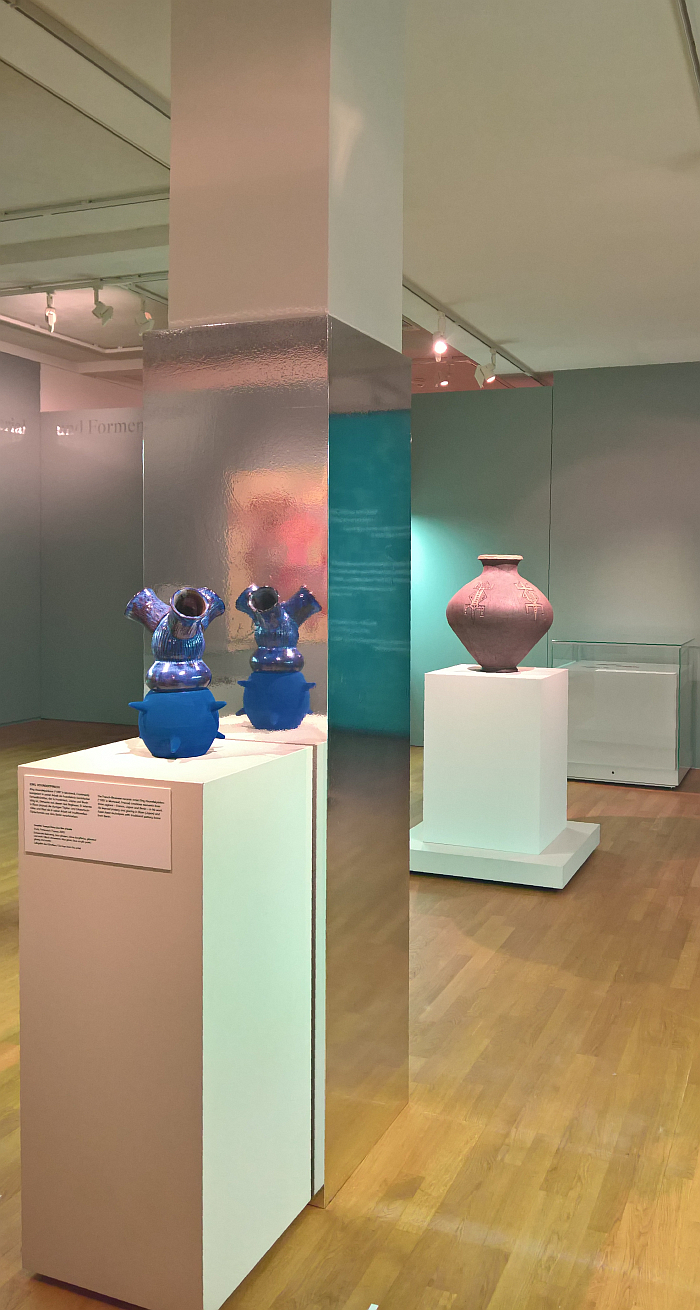