The Urburb – Patterns of contemporary living at the Deutsches Architektur Zentrum DAZ, Berlin

Until February 8th 2015 the Deutsches Architektur Zentrum, DAZ, in Berlin is presenting the exhibition “The Urburb: patterns of contemporary living”

Developed by Ori Scialom, Dr. Roy Brand and Keren Yaela Golan The Urburb was Israel’s contribution to the 2014 Venice Architecture Biennale and aims to place the current state of urban planning and architecture in Israel in context of historical developments.

To this end The Urburb features four so-called sand printers – industrial plotting machines which continuously sketch examples of typical Israeli houses, towns, estates and regions into Negev Desert sand and then, and much like the Etch A Sketch of our youths, wipe out what they have created. And start again. And then destroy again. And then start. And then destroy. Start. Destroy. Start. Destroy.

In addition to developing The Urburb as an installation Ori Scialom, Dr. Roy Brand and Keren Yaela Golan also developed the Urburb as a word and concept to describe their interpretation of contemporary Israeli planning as neither urban nor suburban, a phenomenon which for the trio has its origins in an inherent Israeli dislike of large cities and whose contemporary position as the basis for Israeli architecture and urban planning has its roots in one of the first attempts to bring some form of order to urban planning in the new State of Israel, the so-called National Outline Plan.

Developed from 1951 onwards by the Bauhaus educated, Polish born architect Arieh Sharon, the National Outline Plan was essentially concerned with moving the Israeli population away from its principle centres on the western shores and spreading them throughout the country. Sharon’s plan saw a grid network of new towns laid out across the habitable areas of Israel. Largely based on a modernist interpretation of the English garden city principle the new towns were composed of a loose connection of individual sectors, or “neighbouring units”, who were to exist independently of one another.

The problem, according to the curators, is that the plan didn’t work, didn’t provide for sustainable, effective communities which could form the basis for a sustainable, effective nation but rather created a disjointed grid of dysfunctional conurbations.
And much worse, that successive Israel governments have compounded the initial problems by simply repeating the same approach over and over again; continually expanding Sharon’s initial grid without making any changes to the plans. Or perhaps better put have only recently stopped repeating the same errors over and over again within the limits of Israel’s 1967 borders, but are continuing to repeat them within the occupied territories. As such the new settlements are not just political problems but are also creating long term urban planning disasters.

And as such make clear that modernism and its readily transferable, standardised solutions doesn’t necessarily make things better, at least not if simply left to blithely and blindly repeat the same dogmatic ideas without allowing for and undertaking any correction to rectify faults in the system.

In addition to exploring the development of Israeli urban planning at an over-regional level The Urburb also looks at smaller scale developments. The contemporary Israeli city, for example, is explored in context of its development from the first British expansion plans for Jerusalem in 1944 over the plans for Hadera, Holon and Yahud, and again in doing so reflects a philosophy based on repetition of what has gone before rather than of leaning from what has gone before an developing new, site-specific solutions. The explorations of neighbourhoods and the building unit similarly concentrate of the sense of Israeli architecture and urban planning repeating that which has gone before, regardless of any evidence that may suggest change is advisable. 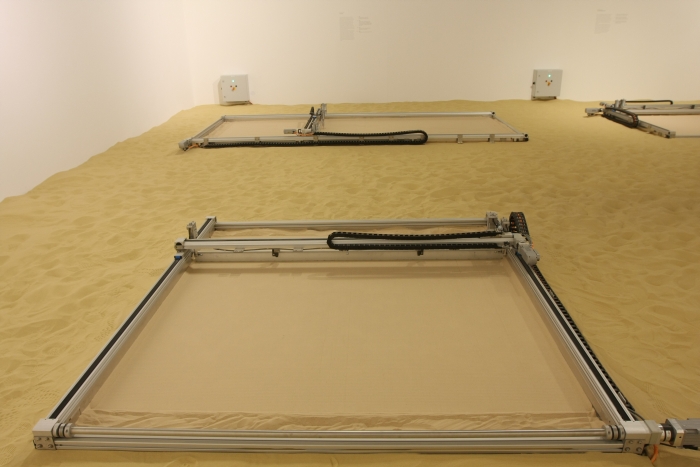 In Venice The Urburb was presented on two levels within the Israeli Pavilion, we never saw it in Venice, however suspect that its presentation in one room in Berlin is a more rewarding experience. As is, again we assume, the decision to completely fill the DAZ exhibition space with sand rather than simply piling dunes next to the sand printers as was done in Venice.

Not least because through the presentation approach the curators have created a very welcoming and engaging space in which to view the exhibition.

The Urburb avoids such intellectual inaccessibility with a very simple slight of hand. Although the exhibition is technically the sand printers, the room full of sand, the gentle background music coming from Daniel Kiczales’ accompanying Urburb Music Box sound installation combined with the repetitive humming of the plotters causes you to largely ignore the printers and concentrate on the texts. Yet always returning to the printers to visualise what you have just read. The switch between mediums underscores the message and creates a comprehensible, uncomplicated and highly enjoyable exhibition experience.

On account of its history and rapid, unnatural, population growth combined with its largely desert topography Israel has a unique set of architecture and urban planning challenges. The geopolitical relevance of Israel however make it very important that the country’s politicians correctly respond to these challenges.

The Urburb presents an interpretation of the current state of architecture and urban planning in Israel, yes it is one opinion by one group of architects and academics, but nonetheless presents a convincing and clearly formulated perspective on how Israel got to where it is today and, and much like the 2011 exhibition Kibbutz and Bauhaus at the Stiftung Bauhaus Dessau, makes clear that part of the current problem is lessons not being learnt or at least not leading to fundamental changes.

The Urburb doesn’t offer any solutions for new approaches, doesn’t advise the government how to rise to the challenges, but doesn’t set out to; because the curators understand that new approaches can only come once all involved have accepted the current reality and for all how one got there.

An important understanding that can be freely and liberal applied elsewhere and in other contexts.

The Urburb – Patterns of contemporary living can be viewed at the Deutsches Architektur Zentrum, DAZ, Köpenicker Straße 48/49, 10179 Berlin until Sunday February 8th.

Full details can be found at www.daz.de