Following on from last year’s highly enjoyable Objects for the Neighbour exhibition Karoline Fesser, Kai Linke and Thomas Schnur are back this year with a new show: Objects and the Factory.

Time was when the factory was the aspiration of any industrial designer for their projects. A factory meant that project had become a product, and was an industrial product not a craft product. However over the decades changing social and cultural conditions coupled to numerous caesurae in design have meant that the importance and romance of the factory has faded and dwindled – physically and metaphorically – so that today little remains of the factory of yore.

But what was the factory of yore? Was it something tangible? Or was it an an idea, an idealised impression? Did the factory ever really exist? And if it did, do we miss it? Was it romantic? Or was it exploitive brutality?

Karoline, Kai and Thomas asked nine design colleagues to tackle such questions and so to provide their interpretation of the idea of “factory” in a product.

And thankfully they kept the brief as vague as they did with “Objects for the Neighbour”, and from this freedom has arisen a collection of objects as varied and contradictory as they are unified.

Karoline Fesser focussed on a, for her, typical factory product, the ubiquitous metal workshop stool and has created the Wooden Workshop Stool, an object that although formally reminiscent of the “original”, through the use of a new material gives the genre a whole new aesthetic, a new purpose.

A similar play on and with aesthetics has been undertaken by Kai Linke with his K Table. Cut from a cross section of classic double T steel girder Kai has treated the surface of the steel to create an almost artistic piece, an object where although you recognise the form, would never assume that it actually is solid steel. Or at least not until you stubbed your toe on it. And an object that despite its industrial heritage will pass perfectly in near any domestic landscape.

Elsewhere Mathias Hahn has revisited the art of opal glass production, Mark Braun has moved towards improving the simple porcelain bowl through addition of an equally simple silicon ring while Sven Lützenkirchen has created series of photographic works that challenge our view of the factory; visually and conceptually.

Factories, we learn, being not just what one deliberately produces.

And also of course how one produces. One could argue that it is a shame the none of the designers chose to tackle the current situation in many of the world’s factories, be they textile factories or those producing the fruit based technology without which the global design industry would crumble.

One could argue. But shouldn’t

The projects on display are design objects. Not art objects. And despite what you may read elsewhere there is still a difference.
A designer’s first obligation is to ensure that their products are ecologically, environmentally and socially responsible.

And the objects on show are; be they Daniel Lorch’s Moorea lamp with its OLED light source, Torsten Neeland’s clothes hanger Urban Nomad, a product that despite its name was designed with the aim of reducing the transport involved, or of course Construct Table Shelf.

Once an object becomes a product and enters production the designer retains a responsibility for ensuring it is produced, marketed and distributed correctly. But all projects on show in Cologne are objects not products.

Displayed in the post industrial charm of a disused backyard outhouse in Cologne Ehrenfeld Objects and the Factory is a reminder that consumer goods need to be produced, and must be so designed that they can be produced. But production needn’t remove the soul from an object, deprive it of its independence and character. The designer’s job is to ensure the preservation of such. And that regardless if the product is being designed for open source distribution, for self-production, for small scale gallery projects, or for mass production. So for the factory of yore.

Or, if you don’t want to get involved in such philosophical discussion, displayed in the post industrial charm of a disused backyard outhouse in Cologne Ehrenfeld Objects and the Factory is a delightful collection of intelligently considered, developed and formed design objects created by a collective of some of the best young(ish) designers working today.

Objects and the Factory runs at Körnerstrasse 48, 50823 Cologne until Sunday January 19th 2014 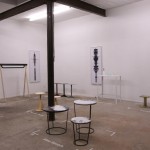 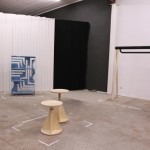 Construct Table Shelf by Samuel Treindl, Wooden Workshop Stool by Karoline Fesser and Urban Nomad by Torsten Neeland, as seen at Objects and the Factory, Cologne 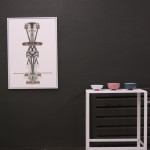 An art work by Sven Lützenkirchen und Ninja – lesie Schale by Mark Braun, as seen at Objects and the Factory, Cologne 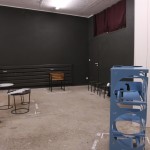 Construct Table Shelf by Samuel Trindl, Ceramic Tables by Elisa Strozyk and the outdoor chair Rebeca by Reinhard Dienes, as seen at Objects and the Factory, Cologne

Louche-Karaffe by Mathias Hahn and K table by Kai Linke, as seen at Objects and the Factory, Cologne 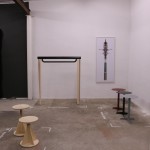 Wooden Workshop Stool by Karoline Fesser, Urban Nomad by Torsten Neeland, Construct Table by Thomas Schnur and an art work by Sven Lützenkirchen, as seen at Objects and the Factory, Cologne 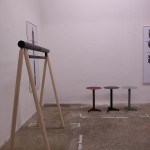 Urban Nomad by Torsten Neelanmd and Construct Table by Thomas Schnur, as seen at Objects and the Factory, Cologne 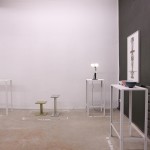 Ninja -leise Schale by Mark Braun, Moorea by Daniel Lorch and K Table by Kai Linke, as seen at Objects and the Factory, Cologne 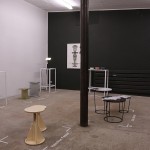