If the Light + Building trade fair in Frankfurt is home to exhibitors the majority of us have never heard of, Passenger Terminal Expo as Europe’s leading trade fair for airport infrastructure is home to exhibitors you never knew you were aware of: the developers of airport signage systems, for example, or manufacturers of airport security gates, baggage carousels, airline ticketing systems or self-check in terminals, and of course that sweet female voice who informs you that your gate has changed, boarding is now commencing to a destination far more exotic than yours, or that boarding is closing on your flight, you are the last passenger and are holding everything up. And two gates further a flight is boarding to a destination far more exotic than yours.

A trade fair so itinerant it would long have achieved frequent flyer status, each year sees Passenger Terminal Expo staged in a different city, the 2016 edition was hosted by Cologne. 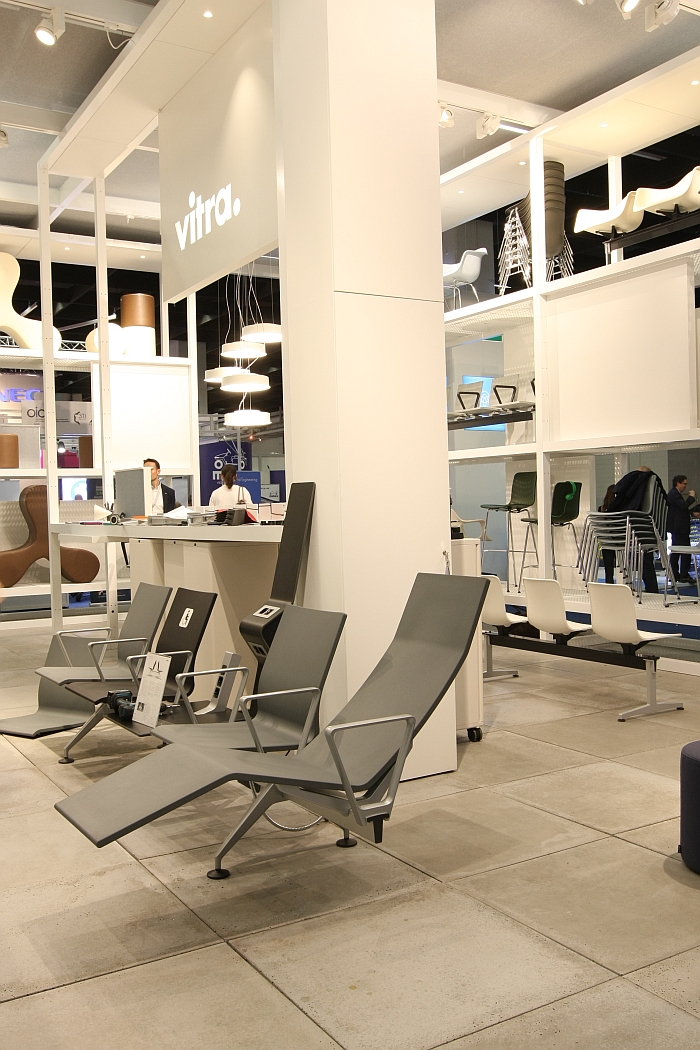 In addition to all those publicly anonymous companies who help make airports tick, Passenger Terminal Expo also attracts one or the other more familiar exhibitor, including the Swiss furniture manufacturer Vitra in the form of their dedicated Airport Division.

When we spoke with Vitra Airport Division CEO Pascal Berberat ahead of Passenger Terminal Expo 2012 he told us that part of the reason why Vitra established a specialised airport division is the cultural uniformity of airports; whereas requirements for domestic and office furnishings vary geographically, airport’s demands are generally global, and thus it makes sense for a company such as Vitra to have one central airport division.

Whereas Vitra’s airport portfolio has until now featured a combination of designs from the company’s wider programmes, including, for example, the Eames plastic chairs or designs by Maarten van Severen, and specially developed projects such as Airline by Sir Norman Foster or the Meda Gate family by Alberto Meda, in Cologne Vitra are presenting with Verner Panton’s Cloverleaf Sofa from Verpan a new string to their bow, namely a co-operation with another manufacturer.

The cooperation to market the Cloverleaf is limited to the airport sector alone, is however a decision which given the scope of the Vitra portfolio, raises the obvious question, why?

“We want to offer as wide a spectrum of solutions as possible”, explains Pascal Berberat, “and in that regard are open to co-operations with other firms, when they offer high-quality products which meet our standards. Formally the Cloverleaf offers an alternative to the stiff, linear geometry of the benches which currently dominate airport seating concepts, and with Flower by SANAA we already have a product which has a very similar organic form and which nicely compliments the Cloverleaf. And naturally there is also a strong connection between Verner Panton and Vitra”

Which shouldn’t be understood that benches will be vanishing from our airports, far less from the Vitra programme; much more that we can expect ever more softer, organic forms of seating in our airports as alternatives and contrast to the familiar benches.

And for us Vitra’s cooperation with Verpan makes perfect sense. Developed by Verner Panton for his 1970 Visiona 2 exhibition in Cologne the Cloverleaf is a modular system, and as such offers a great degree of flexibility, but more importantly is an exiting system, and as any fool know, why create what exists? Create new, and if something is available which meets your requirements, use it. It’s economic and environmental sense in practice. 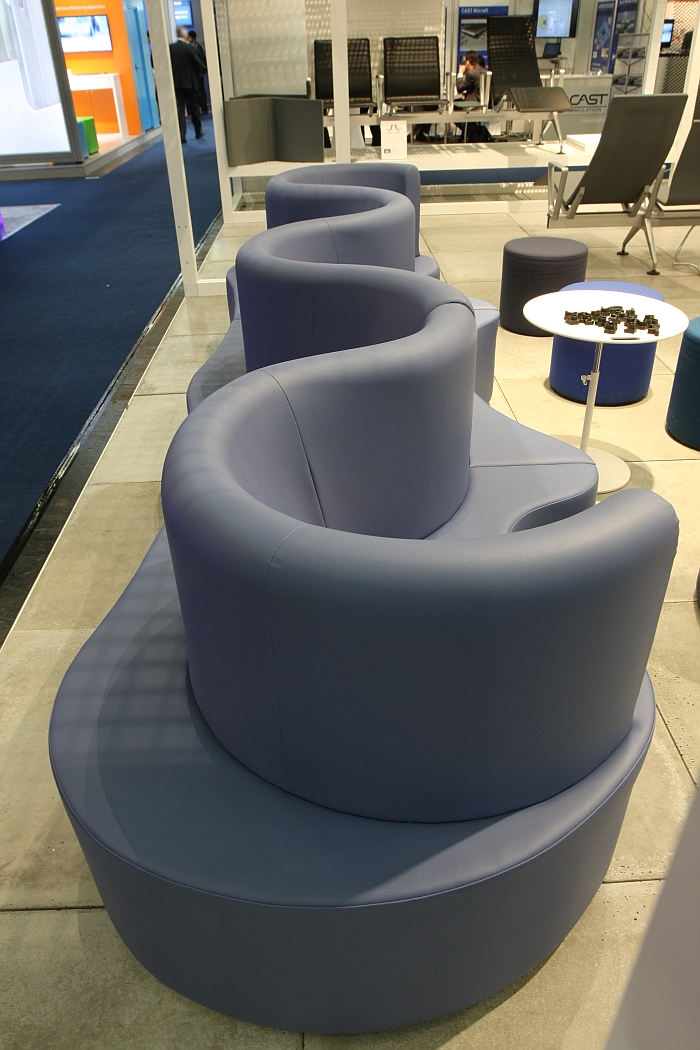 Not linear. The Cloverleaf modular sofa concept by Verner Panton through Verpan, as seen at Passenger Terminal Expo 2016 Cologne

That benches are going to remain the staple of airport seating for the immediate future can be seen on the stands of all the furniture manufacturers represented at Passenger Terminal Expo 2016, featuring as they do some 90% bench systems.

And in many respects the bench is the logical solution for airport seating. All systems available are modular, the airports being free to combine seats, tables or loungers as required for a given area, and should one element become damaged it can be simply exchanged.

Vitra’s own experience with benched public seating systems dates back to the 1960s and the Eames’ Tandem system, a system which is still in the company’s portfolio and which stood, in an old-skool fibre glass A shell version, outside a small regional airport we were previously forced to use. And the sight of which always softened the blow of having to be there.

Although presenting no new bench concepts per se at Passenger Terminal Cologne Vitra are presenting a new addition to their bench programme: the HAL bench featuring, unsurprisingly, the HAL seat shell by Jasper Morrison.

Intended primarily as a solution for locations where space is at a premium, such as, for example, smaller regional airports, in comparison to the majority of other airport benches the HAL bench is leaner, slender, a more compact, less voluminous affair which exudes an uncomplicated elegance. And is also a very neat example of the flexibility inherent in a well designed product –  and yes we are assuming here that the HAL shell is the product, just as the Eames’ shell is the product – to which a series of interchangeable bases can be attached, namely the possibility to employ one seating family throughout an airport; something which has less to do with the optical unity an interior designer may strive for and much more with the practicality of being able to switch furniture around should the need arise. The great joy however for us of the HAL bench is less such traditional considerations about furniture design and functionality and much more that it has no armrests; armrests on airport chairs being as everyone knows one of life’s great evils.

Yes we do understand, and grudgingly accept, the argument that airports don’t want people lying down on benches as it plays havoc with their seating capacity calculations. 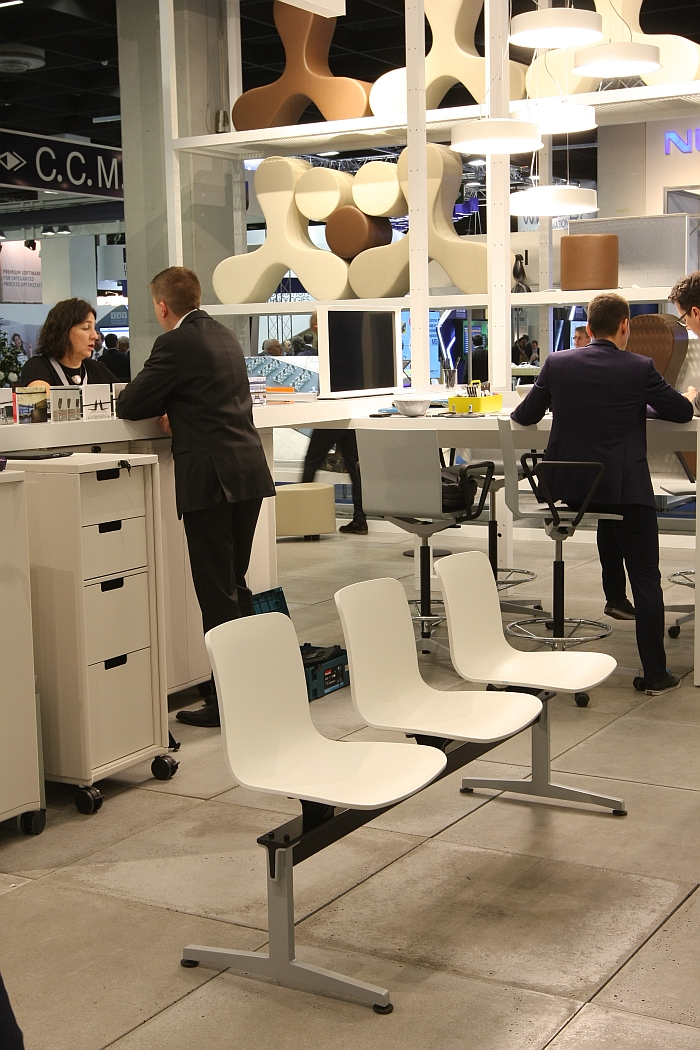 A bench composed of HAL seat shells by Jasper Morrison for Vitra, as seen at Passenger Terminal Expo 2016 Cologne

In our previous Interview with Pascal Berberat he compared airports to small cities, and viewed in that context it is easy to understand why a company such as Vitra would be interested in a market such as airports. On the one hand the depth and breadth of their portfolio means they can supply seating not only for public waiting areas, but for all sectors of an airport from security and duty-free over lounges, bars and cafeterias and on to air traffic control; and because much of that seating comes from a portfolio of products available for every home and office many passengers will recognise the designs and thus feel themselves more comfortable in the sterile, high-security environment that is a contemporary airport. In addition the inherent systems thinking and research into questions such as ergonomics or materials which underlies much of the Vitra product portfolio means they can bridge the divide between the demands on the side of the passenger for comfort and those of the airport operator or airline for flexibility and durability. Function, lest we forget, always being a matter of perspective.

As such the transfer of the Vitra product range from domestic or office environments to the multi-faceted context of an airport is relatively straight forward; something observant travellers will be able to identify when passing through airports as varied as Munich, Doha, Heathrow, Delhi or Eindhoven. Or indeed the Eurostar Terminal at Waterloo Station in London. What is true for airports being just as applicable for train stations or ferry terminals. Or shopping centres, council offices, doctors waiting rooms, etc, etc, etc

Recent years have seen, aside from a few principled conscientious objectors such as Berlin, a global increase in the number of airports and the provision of airport capacities, a situation which Pascal Berberat doesn’t expect to change in the near future.

“The world is getting smaller, the demand for mobility is increasing and flying is no longer the luxury it once was, and I am convinced that in the coming years such will continue to increase. And when more is flown, we will need ever more infrastructure, and that means for all more airports”

Airports featuring furnishings by a company you may have heard of, technology by firms whose name you will never know, and which are home to a woman who’s voice is so sweet she could make an approaching apocalypse sound a little less threatening, “Four Horsemen Airlines are happy to announce boarding of flight REV618 to Tribulation…….” 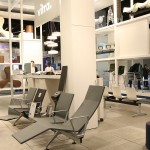 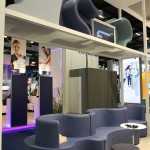 Cloverleaf modular sofa system by Verner Panton through Verpan, and distributed to airports via Vitra, as seen at Passenger Terminal Expo 2016 Cologne 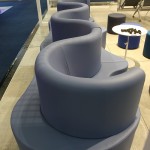 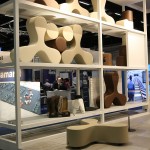 Flower by SANAA architects for Vitra, as seen at Passenger Terminal Expo 2016 Cologne 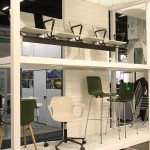 HAL by Jasper Morrison and .04 by Maarten Van Severen both for Vitra, as seen at Passenger Terminal Expo 2016 Cologne 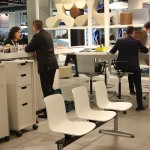 A bench composed of HAL seat shells by Jasper Morrison for Vitra, as seen at Passenger Terminal Expo 2016 Cologne 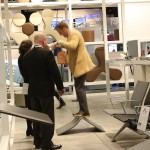 Meda Gate by Alberto Meda for Vitra, Robust we tell you, robust! 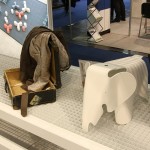 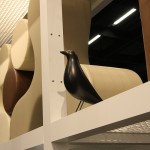 Possibly the only visitor to Passenger Terminal Expo Cologne who didn’t actually need an airport…..