“It is a peculiar tension that precedes a first visit to a painting exhibition”, opined the Dutch art critic Jacques van Santen Kolff in the introduction to his four part review of the 1875 exhibition at the Teeken-Akademie Den Haag, “there is a unique charm, something stimulating in that nervousness, an eminently “picturesque” tension.”1

Kolff wasn’t disappointed, that which he had sensed in the air was confirmed by that which hung on the walls and led him to coin the term “Hague School”, thus giving a name, a status, a relevance, to a contemporary movement in Dutch art, one which, according to Kolff, was a “new ultra-radical movement.”

But would we be as fundamentally convinced by what we saw in 2018 as Kolff was in 1875? Would we subsequently speak of a “new ultra-radical movement” in Dutch design?

And would our review run to four parts……… 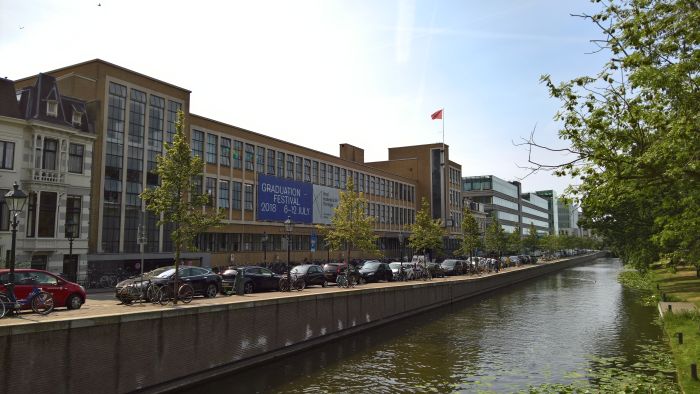 Tracing its history back to 1682 and the establishment of the aforementioned Haagsche Teeken-Academie – The Hague Drawing Academy – the contemporary Koninklijke Academie van Beeldende Kunsten, KABK was in many regards the source of rebellion that led to the Hague School, or perhaps better put, dissatisfaction in the early 19th century with the teaching at the then Academie van Beeldende Kunsten – Fine Arts Academy – saw students leave to travel elsewhere in Europe in search of a more contemporary training, before in the course of the 1860s they regathered, joined by younger colleagues, in the Hague. Focussing on a realistic style that depicted scenes of daily Dutch life in a simplified, democratic, grey, yet unquestionably romanticised fashion, “can”, asked Kolff, “a person other than a Dutchman see nature in such a way as to conceive and reproduce such a treasure of poetry in the most unadorned, austere representation of the simplest reality?”2

“Ik betwijfel’t.” He answered. I doubt it.

Thoughts which automatically bring us back to the Gemeentemuseum Den Haag’s exhibition, Art Nouveau in Nederland which, amongst other narratives, explores how images of nature, and for all artistic associations of nature with perceived characteristics of a Dutch national identity, influenced craft and design in the Netherlands at the turn of the 19th/20th centuries. Thus, one could argue, the imagery of the Hague School, including those works created by Academie alumni such as Gerrit Willem Dijsselhof, was central in the development of the “honest and sincere and ruggedly sturdy” Dutch furniture and accessories of the period. If one must add that Den Haag was also home to Chris Wegerif’s Arts & Crafts Gallery, an enterprise that represented a much more cosmopolitan, international view than that presented by the more rugged, Dutch, practitioners in Amsterdam, a cosmopolitan, international view shared by many residents of the then Den Haag, and among Wegerif’s most important Dutch collaborators was Academie alumnus Jan Thorn Prikker. Which, one could argue, questions the influence of the Academie. But we digress. And really should stop, lest this actually does become a four part review.

With the rise of the reformist European avant-garde came a shift in focus and in the course of the early 20th century the Academie started offering study programmes in subjects such as architecture, graphic design, photography or advertising, while the most obvious break with the past came through the replacement in the late 1930s of the Academy’s previous neoclassicist home with a new linear, quadratic, rationally structuralist building by Plantenga, Buijs & Lürsen, a building the KABK still calls home.

Post-war the Academie began offering a degree in Industrial Design, according to the Academie as the first in the Netherlands to do such, thus, more or less, completing the education programme as it exits today, before in 1957, and in honour of the institutes 275th anniversary it became the Koninklijke Academie, the Royal Academy. In 1989 the KABK merged with the Technical College for Photography and Photonics, and in 1990 with the Royal Conservatoire to form an institution formally known since 2010 as the University of the Arts The Hague, but one in which the Conservatoire and KABK maintain their autonomy. 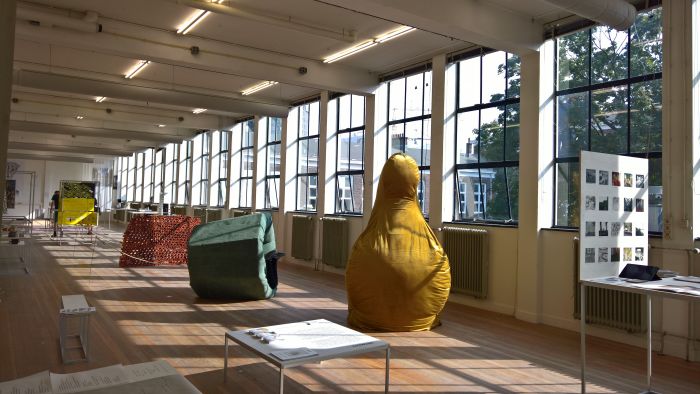 Presenting graduation projects from across the school’s programmes, one of the (surprising) highlights, for us, of the 2018 Koninklijke Academie van Beeldende Kunsten Graduation Festival was the Graphic Design projects.

The second time, thus far, on our 2018 #campustour we’ve become (surprisingly) engrossed in Graphic Design projects and, and as with the Edinburgh School of Art, the reason for the projects so positively catching our attention was the way the students (seemingly) ignored established graphic design conventions and focussed on the theme, rather than using the theme as a conduit to demonstrate their graphics skills. Among a wide variety of projects with which we spent a great deal of time were Manufacturing Habits by Rebecca Rui which explored how tech-companies manipulate our online activity and thereby the role of interface design in helping facilitate that, or Windows Without a View in which Rudi van Delden considered a future where you can “reclaim the missing third of your life” i.e that when you’re asleep, and explored “the bedroom as the new office cubicle, a place where people inexhaustibly complete HITs” HITs, apparently, being Amazon-speak for “Human Intelligence Task” a.k.a that which a human can do but a computer, as yet, cannot. And which sounds like becoming a term of derision in the near future.

With Augmented Colonization Sean Valies, posed the (very near) future question “can our augmented space be colonised by corporations and governments through the use of packaging” and which thus initiated a discourse on how future augmented reality space could/will be (mis)used by governments and corporations to push their manifestos; that it represented a (very near) future reality being neatly underscored by Asya Sukhorukova who appropriated the moniker “Engineers of the soul” Stalin used to describe socialist realist artists as the basis for an analysis and exploration of how Russian state television news served as propaganda portals for Vladimir Putin ahead of the recent Russian presidential elections. 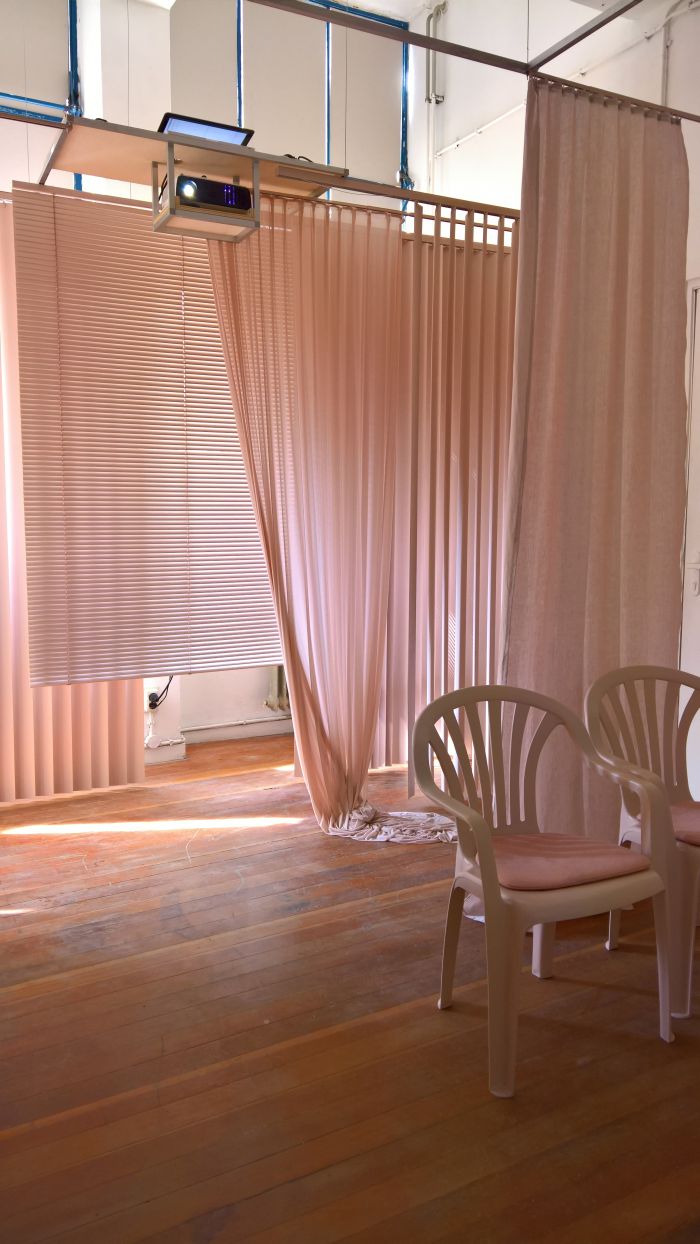 There is something quietly pleasing about the fact that the KABK offer a Bachelor in Interior Architecture & Furniture Design, for, and as we noted from the exhibition INSIDE architecture by Åke Axelsson, Jonas Bohlin, Mats Theselius at the Konstakademien, Stockholm, there is an undeniable link between the two, or perhaps better put, many of the better examples of the latter arose/arise in conjunction with considerations on the former. Not always, but often. Arguably because of this joint interior/furniture approach and a (possible) greater dominance of theoretical considerations on the part of the students, many of the 2018 graduation projects were less concerned with developing items of furniture/interiors as with attempting understandings of either our relationship to furniture/interiors and/or the wider social and cultural context of furniture/interiors.

Projects such as Between Curtains by Dann Kuiper which explored what Dann refers to as the veil individuals put around them through social media and the comparison with housing, and for all Dann’s observation that social housing, with its intentions of creating communities tends to lead to isolation, much as social media tends to an increasing internal perspective; with Suru Housing, a modular construction system inspired by traditional Japanese wooden constructions, Charlotte Meijerink didn’t do anything particularly new or radical, but did very neatly underscore the enduring charm of both the Japanese aesthetic/role model and of the equally enduring logic and magnificence of modular construction; while with The Cross-Breeding Programme Yamilé Bueters applied the basics of biological evolution to chair design.

Beginning from the position that “a chair is not an object in isolation, but rather conforms to its context”, Yamilé considered what happens if you place a chair in a different context, for all a different cultural context, and how does that chair evolve. While for our money Yamilé appears to have placed a little too much faith in the role of genetics in cultural evolution, whereby we must add we’ve not read her thesis, just viewed the presentation in Den Haag, it was still a very interesting discussion on how chair design evolves as an idea is transplanted from one context/culture/age to another. Or perhaps better put how it should evolve, for today far too many designers and manufactures fail to understand the importance of the cultural context, tending to focus on a form and assuming that is important/ fixed/desirable/can’t imagine that it is merely an interpretation of an idea frozen in a time and place. Or put another way, a lot more reflection on the cultural aspects of chair design wouldn’t go amiss.

Elsewhere, in context of INSIDE, the KABK Master in Interior Architecture, Goda Verikaite considered with Recycling Utopia: in progress the next step for Lithuania’s soviet era housing blocks, specifically a series of proposals for turning them into what Goda refers to as “experimental playgrounds of ideas and theories”, socialist utopia as a lab for a new social utopia?; while with Hue Chiara Veenstra realised in context of her Interactive/Media/Design Bachelor project a very neat demonstration of the fact that how one perceives colour is not fixed but rather is dependent on prevailing conditions and external influences. One could argue demonstrated that how one perceives the world around us is dependent on prevailing conditions and external influences.

Full details on the Koninklijke Academie van Beeldende Kunsten Den Haag can be found at www.kabk.nl 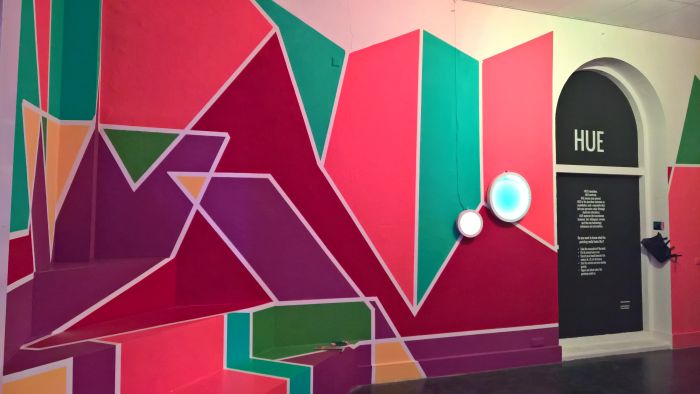 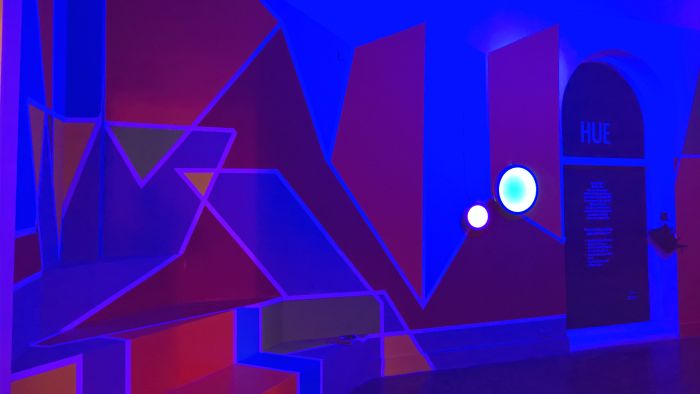 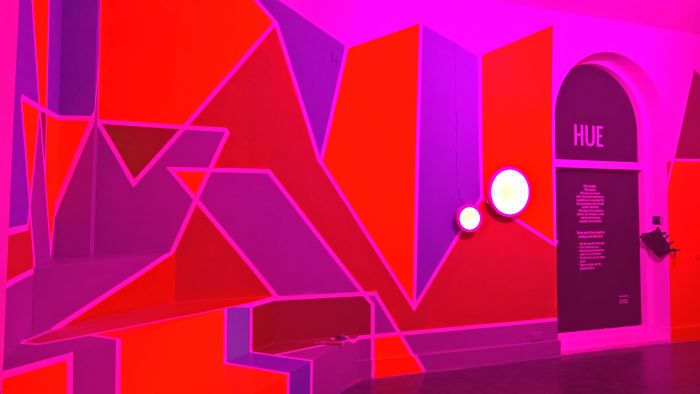 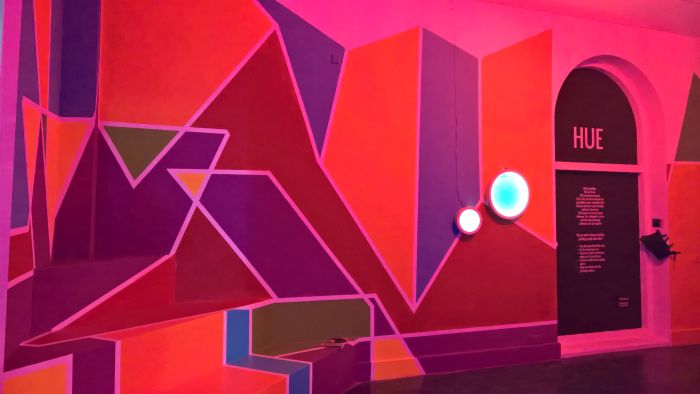