Alongside the Chinese and Korean New Year celebrations one of the most popular observances in any given February is, arguably, the Feast Day of Saint Valentine on February 14th; St Valentine famously being the patron saint of s, lovers, but less famously, if just as importantly, also offering protection from the plague.

Now while the misanthropes amongst you will query whether love and plague aren’t synonyms, and a pox upon you for that; this February 14th we could all do with not only a little love, but a goodly dose of plague protection. And so rather than the traditional veneration of St Valentine through the distribution of hurriedly purchased and poorly considered flowers and chocolates, how about we all agree to celebrate the life of St Valentine through taking a little more care of one another, spreading a little more communal love and a little less plague, taking the weight of his shoulders for a few hours………….?

Beyond offering protection to lovers and from the plague, and protecting beekeepers, St Valentine also offers protection to travellers, which sadly no-one is these days. But those days will come again.

Until they do we continue with our hybrid exhibitions recommendations lists: that for February 2021 featuring a trio of offline exhibitions in Weil am Rhein, Hamburg und Falkenberg, and while they in all probability wont open as planned, will open, and before they do offer impetus for a little self study, and also two online highlights to explore, research and, for all, enjoy at your leisure.

Perhaps on February 14th, for as we all know, the couple that develop and deepen their design understandings together, stay together…… 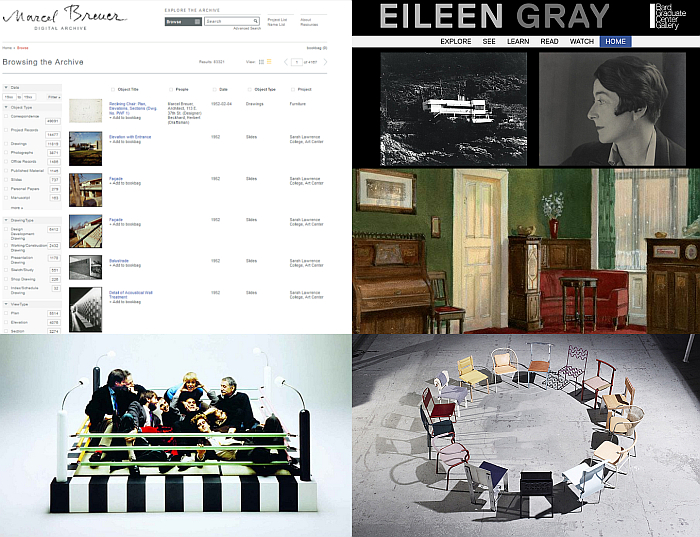 “Memphis: 40 Years of Kitsch and Elegance” at the Vitra Design Museum Gallery, Weil am Rhein, Germany

Amongst the many singular moments in the (hi)story of design the collective Memphis is/are, arguably, one of the least well (popularly) understood, is/are the one most commonly reduced to a “style”, simplified to easily copied forms and colour schemes, rather than being understood as the positions on the relationships between objects and users, on the definitions of function, value, taste, society, etc, those forms and colours embody.

By way of celebrating the 40th anniversary of the first Memphis exhibition in September 1981, the Vitra Design Museum Gallery promise with Memphis: 40 Years of Kitsch and Elegance a presentation of not just Memphis furniture and lighting, but also archive sketches, drawings and photos through which they aim to provide both an insight into the collective and its works, and also an introduction to the many and varied, international, characters involved including, and amongst others, Michele de Lucchi, Peter Shire, Nathalie du Pasquier and Instigator-in-Chief Ettore Sottsass. And also photos from the inside of Karl Lagerfeld’s Memphis filled Monte Carlo apartment. As oft noted in these dispatches, Lagerfeld was one Memphis’s biggest fans, and one of the very few people to actually live on a daily basis with a Memphis interior.  Which we don’t believe was Sottsass et al’s intention.

While the very real disparity between the spatial limitations of the Vitra Design Museum Gallery and the sheer endlessness of Memphis won’t allow all aspects of the collective, their work and their importance, relevance, relationship to the (hi)story of design to be explored in minute detail, Memphis: 40 Years of Kitsch and Elegance should allow us all to approach a better understanding of Memphis and thereby help us all to move away from our popular focus on the objects. 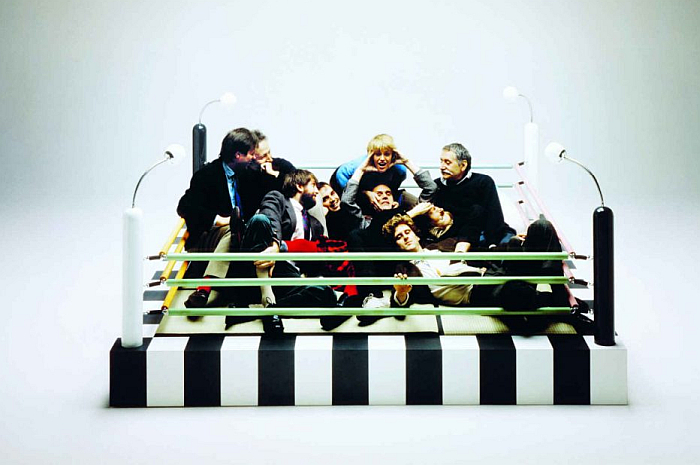 In 2020 the Bard Graduate Center Gallery, New York, staged an exhibition of the work and life of the Irish/French designer and architect Eileen Gray; an exhibition which, invariably in 2020, not only found its run limited, but also couldn’t be viewed by as international an audience as Eileen Gray deserves. And which thus all the more pleasingly now finds itself as an online exhibition. An online exhibition that as much as being a companion piece to the offline exhibition is also a joyously fulsome, in-depth and varied reference source on and for a most interesting, important and informative early 20th century creative.

In addition to detailed discussions on projects and works by Gray both well known and less well known, discussions primarily undertaken through concise texts and copious photographs, Eileen Gray @ the Bard Graduate Center Gallery Online also provides for a very succinct, if both thorough and broad, introduction to the person Eileen Gray and her biography; even if it is missing the story about Eileen Gray and Marisa Damia cruising the boulevards of 1920s Paris in Damia’s convertible and with Damia’s pet panther on the back seat. Which we believe is a legal requirement in all and any telling of the Eileen Gray biography.

Not that such detracts from the presentation, and certainly not from a presentation that very pleasingly includes the educational material prepared for the exhibition; material which includes a number of furniture and interior design related activities for young and old alike and which thereby satisfyingly employs Eileen Gray, employs approaching a better understanding of Eileen Gray, as a conduit for a journey of exploration and discovery.

We believe Eileen Gray would have approved, she being as she was partial to professional and personal journeys of exploration and discovery…….
⇶ Eileen Gray @ the Bard Graduate Center Gallery Online

Born in Sireköpinge, southern Sweden, on September 21st 1857, Peter Gustaf Dorén trained as as a mural painter/architectural artist in Eslöf and Lund before, and after brief stations in Copenhagen, Düsseldorf and Paris, he established his own atelier in Hamburg in 1887. And rose to become one of the more important and influential interior decorators/interior designers in the city; something attested to by the fact that at the height of his success Dorén’s Werkstatt für Wohnungskunst employed a staff of some 200.

Who can claim that today…….?

Promising a presentation of documents, sketches and photographs Peter Gustaf Dorén. Interior Design in Hamburg circa 1900 should provide not only for an introduction to the work of the, largely forgotten, Peter Gustaf Dorén, but for all provide an insight into the approaches, methodology and positions of an interior designer/decorator who was well connected and well travelled in the late-19th/early 20th century, a creative who was immersed in the evolving and developing understandings of the late-19th/early 20th century and by necessity evolving and developing his understandings and practice, and in doing such should allow for a differentiated perspective on the development of interior design and interior decoration, on the business of interior design and interior decoration, during that period. And by extrapolation help chart a further route of design’s progression from then till now, and thus of the continuing relevance of then for now.

Born in Pécs, Hungary, in 1902 Marcel Breuer was not only one of the more important and more interesting Bauhäusler, nor only one of the driving forces behind the development and dissemination of both steel tube furniture and moulded plywood furniture, but was also an important voice in 20th century architecture, for all as the positions and understandings of the inter-War years matured and developed in post-War America and post-War Europe.

A variety of roles across time and space which demand that we all become better acquainted with Breuer, his life and his works.

And a task greatly eased, and positively encouraged, by the Marcel Breuer Digital Archive.

Hosted at, and led by, Syracuse University Libraries and including contributions from international institutions such as, and amongst many others, the Archives of American Art, the gta Archiv/ETH Zurich, the Vitra Design Museum or the Bauhaus Archiv Berlin, the Marcel Breuer Digital Archive makes over 80,000 letters, photos, sketches, magazine articles, invoices etc, etc, etc by, from and for Marcel Breuer available for perusal and study 24/7; and which thus not only allows us all to approach that better understanding of Breuer, but also helps us all better place Breuer on architecture and design’s helix.

Offering numerous points off entry the Marcel Breuer Digital Archive is, as the figure “over 80,000” implies, a veritable treasure trove, and one whose considered layout enables it to be approached either in a structured fashion or just randomly: the latter being our preferred option. Or more accurately preferred starting point: dive in somewhere, “Eames, “Aalto”, “Knoll”, “lighting”, whatever takes your fancy, and then move in a structured fashion forward from that point.

Aside from the detailed cataloguing with the wide and varied interlinking such enables, and also aside the shear number of letters and documents which provide for fascinating insights into the the life and career of Marcel Breuer, one of the genuine joys is the extreme high resolution of the scans, which allow one to get in really close to the sketches, draughts, photos, etc… 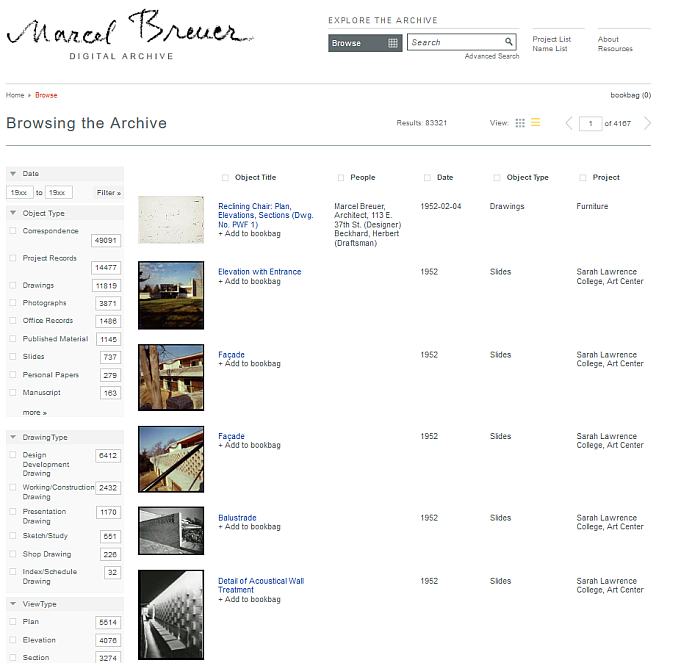 “The Kinship Method” at the Rian Designmuseum, Falkenberg, Sweden

As a project the The Kinship Method had its first public outing in context of the Stockholm Design Week in February 2020. Which although thinking back on it it seems like reflecting on another age, some distant civilisation who remain visible in fossils alone, was in fact just 12 months ago. And we were there. If pressures of time meant we missed The Kinship Method.

Instigated by Stockholm based designer Margot Barolo The Kinship Method tasked five designers – Fredrik Paulsen, Erik Björk, Mia Cullin, Andreas Nobel and Margot Barolo – with the development of a chair each; a chair which was subsequently passed on to another of the quintet and who was tasked with developing that chair into a new chair. Before passing it on the next designer, who was tasked with…..

The result being a collection of 15 chairs which although joint works are not collaborative objects in the classic sense, but rather represent the results of interpretations of how to develop that which you have inherited.

And also, in many regards, represents a focussed, if forced, artificial, embodiment of the ongoing development of furniture design; the truth that that which most furniture designers create isn’t new, but rather is informed by what is and what was, relies on interpretations and translations of the inherited arising from the individual designers own positions and understandings. If not always as consciously as in context of The Kinship Method nor arising in such an abstract and pressured context. 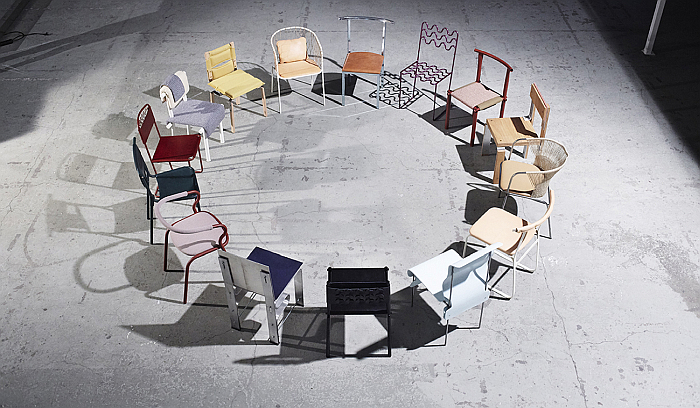