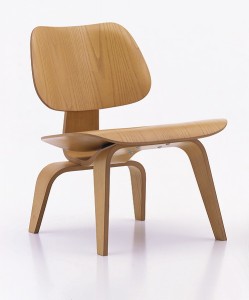 Ray and Charles Eames could happily be described as „multi-talents“. The American designer pair created functional furniture with a global appeal, shot avant-gard films, designed childrens toys and were responsible for the Eames House and Entenza House in Los Angeles.

Charles Eames (1907-1978) studied architecture at the Washington University in St.Louis before a scholarship and subsequent teaching position at the Cranbook Academy of Art brought him to Michigan where he met the painter, and his future wife,  Ray Kaiser (1916-1988). Together with Eero Saarinen, a famous Finnish architect who was initially Charles’ teacher and later valuable colleague, Eames experimented with laminated plyboard; the resulting furniture winning the New York Museum of Modern Art “Organic Design in Home Furnishings” competition. The chairs in the Eames plywood group are characterised by a form that orientates itself on the human body, resulting in a fabulously comfortable sitting experience.

In 1941 Ray Kaiser and Charles Eames married and established a design studio. During the Second World War they applied their experience of and with plywood to create aircraft components, stretchers and leg splints for the US army. Additionally, the started experimenting with fibre glass and aluminium casting. The most important result of this experimentation was – and is – the  “Lounge Chair” created in 1956.

The US furniture producer and pioneer Herman Miller offered Charles and Ray Eames a cooperation. Together with Miller and his design director George Nelson not only was the lounge chair further developed and perfected, but a whole range of Eames creation were developed and produced.  Despite the increasing critical and commercial success of their work,  Charles and Ray Eames never lost sight of their central foci on quality, aesthetic in a product that could built with minimum fuss. The cooperation with Herman Miller naturally brought the Eames work to Europe through Millers partner Vitra. Who to this day still posses the exclusive rights to Eames products in Europe and Asia.

The following Chares and Ray Eames items by Vitra are available from smow: