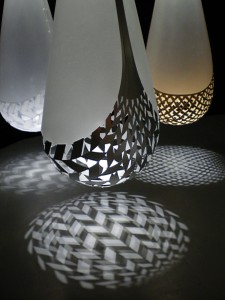 The Top 5 Lamps from the smow design spring. In no particular order.

Kete by David Turnbridge. One of the first lamps we saw in Milan, and probably that which left the greatest impression on us. And not merely on account of its size. For us the principle beauty of Kete is the atmosphere it can create in a room with it 7W LED element. And despite their overproprtionality Kete doesn’t domiante the room. Honest.  Kete. Anything but dull. 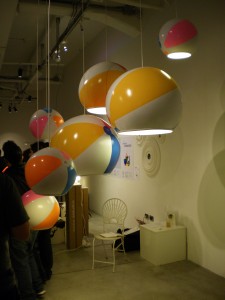 Beach Ball Lamps by TOBYhouse. When we first saw Beach Ball Lamps we thought they were made from shaped aluminium. So stable and rigid are they. Only after entering into converstaion with designer Toby Sanders did we discover that they are real beach balls. And that was when the product became magic. That was the moment when we realised and appreciated just what a product we had before us. And that was the moment when we started to investiagte more carefully. Through a specialy developed process TOBYhouse coat the inside of the balls with a thin polyeurethene coat, before cutting the bottom open and rounding the edges. And with it’s brillant white interior Beach Ball Lamps offers an excellent illumination. Beach Balls Lamps. Anything but dull. 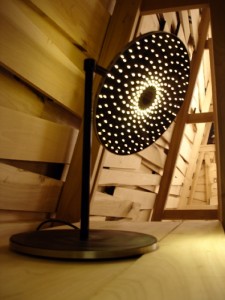 Flatline by Jason Brugges for Established and Sons

Flatliner by Jason Bruge for Established and Sons. We don’t own an iPod which is probably why we took a  couple of minutes to get the hang of the control system. Had it been based on an MD player we would have got the hang of it much quicker. However, once up and running we were in awe of Jason Bruge’s genial dimming system. And the quality of the illumination generated is every bit as convincing. If you don’t know what were talking about, check out our (smow)tube video. Flatliner. Anything but dull. 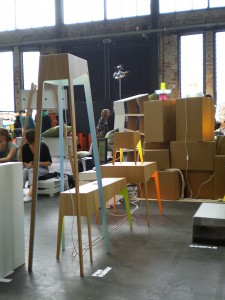 Fiss Family by My Own Super Studio

Fiss Family by myownsuperstudio. DMY in Berlin was full of lamps. We’re not exactly sure why but we’re fairly certain it had something to do with students being set lamp design as part of their final year project. A sort of conspiracy among product and industrial design lecturers to make earth shine more brightly than the sun. Fiss Family by Portugese outfit myownsuperstudio wouldn’t have been much help in such a plot, but was without doubt one of the finest lamp ranges we saw this spring. For us the beauty lies in the fact that the light flows downwards; consequently, they don’t produce the brightest illumination, but that which they do produce is amongst the softest we saw this spring and certainly the best intended for a living room or office when you want a gentle background light or constant, atmospheric illumination. Fiss Family. Anything but dull. 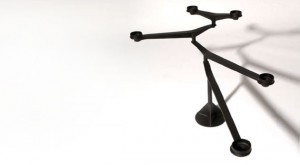 Spin by Tom Dixon. Not a lamp in the popular, modern electrified sense. But then were not sticklers for convention. Correctly used candles can offer a better, more positive illuminaton than their modern cousins. The trick is the “correctly used” part. With Spin Tom Dixon offers a wonderfully stylish opportunity not only to illuminate a space as we want it, but also to change the illumination as and when required. Spin. Anything but dull.

And a special mention goes to moooi for their Horse Lamp.