“Who’s the more foolish, the fool or the fool who follows him?” asks Obi-Wan Kenobi, more or less rhetorically, in Star Wars.

And the Wookie warrior also understood that foolish as the fool who follows the fool is, he is less foolish than the April fool who misses the following five new design and architecture exhibitions opening in the coming weeks…………..

“Somewhat Different. Contemporary Design and the Power of Convention” at the Museum of Decorative Arts and Design, Riga, Latvia

In context of his Autoprogettazione project Enzo Mari argues, more or less, that, in essence, every object only has one perfect form. Functionalists continually change the form to confuse us and so justify commercial, industrial production and by extension the furniture industry. Following similar logic the Postmodernists began corrupting the products of industrial production, or as Jasper Morrison so eloquently put it, “Marcel Breuer seeing a pair of bicycle handle-bars decided to make chairs using the same industrial process. The new world constructor seeing a pair of bicycle handle-bars decides to use them as they are and save himself the trouble and expense of bending the tube.”
The exhibition Somewhat Different. Contemporary Design and the Power of Convention takes this idea of misappropriation as the starting point for an exhibition of objects which deviate from the norm, challenge popular convention and so, hopefully, makes us realise that conventions exist as guidelines rather than laws and that only by thinking beyond conventions can we achieve real change.
Organised by the German based Institut für Auslandsbeziehungen e.V. (ifa) and curated by Prof Volker Albus, himself of course one of the young bucks of the 1980s Neue Deutsche Design German Postmodern movement and an acknowledged master of misappropriating objects, Somewhat Different is a touring exhibition which has been travelling the globe since 2009 and has now landed in Riga. In addition to presenting a “standard” collection of 148 objects from 67 international design studios, including, for example, Pin Coat by Oliver Bahr for Moormann – positioned in the exhibition as “conventional coat rack: a bunch of rigid pins, different coat rack: a bunch of loose pins”; Algue by Ronan and Erwan Bouroullec for Vitra – “conventional: floral décor, different: floral module”; Re-tire & Re-babe by e27.BERLIN – conventional: “mother stands, baby rocks”, different: mother rocks, baby rocks”; or the polyurethane Pushed Washtub by Hella Jongerius – “conventional: hard and cold, different: soft and warm” the Riga show will also present works by 8 local Latvian designers: Māra Skujeniece, Jānis Straupe, Aldis Circenis, Artūrs Analts, Rūdolfs Strēlis, Zane Homka, Rihards Funts, Ieva Kalēja, Māra Skujeniece, Aldis Circenis and Jānis Straupe.

Somewhat Different. Contemporary Design and the Power of Convention opens at the Museum of Decorative Arts and Design, 10/20 Skarnu Street, 1050 Riga on Saturday April 11th and runs until Sunday June 14th 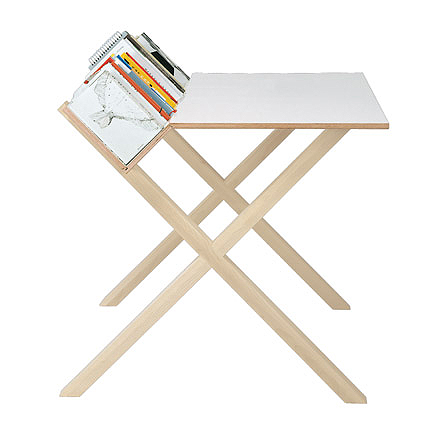 Kant by Patrick Frey & Markus Boge for Nils Holger Moormann, Conventional: storage space beside, under, behind a table Different: storage space inside a table

“What is Luxury?” at the V&A, London, England

There can be little in life that is so fiercely and universally coveted as luxury. But what is luxury? What was luxury? What will luxury become? Given the size, depth, age, range and value of their collection, the V&A London is perfectly placed to analyse such questions. Produced in collaboration with the UK Crafts Council the exhibition “What is Luxury?” promises some 100 objects ranging from handmade watches over fine tailoring and a diamond and emerald encrusted crown to more abstract pieces such as the truly monumental Time Elapsed by Philippe Malouin, the less monumental but no less interesting Hair Highway project by Studio Swine or Gabriel Barcia-Colombo’s DNA Vending Machine and thus aims to explore luxury in all its manifold facets and, we would hope, focus each individual visitors attention to what is truly luxury. And what is just an expensive waste of time and resources. 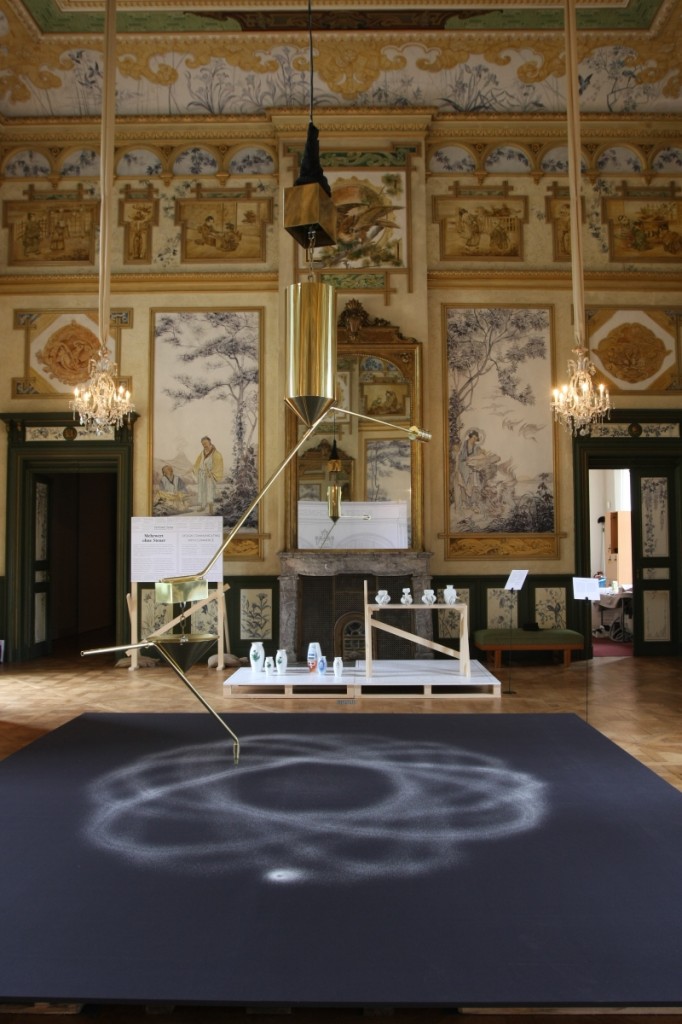 Time Elapsed by Philippe Malouin with J & L Lobmeyr, here as seen as part of WerkStadt Vienna Design Engaging the City at the Kunstgewerbemuseum Dresden

Aedium compositio constat ex symmetria, cuius rationem diligentissime architecti tenere debent – The design of Temples depends on symmetry, the rules of which Architects should be most careful to observe – so wrote, nay demanded, the Roman author and architect Vitruvius in his 15 BC work De architectura, before continuing that, “For without symmetry and proportion no temple can have a regular plan; that is, it must have an exact proportion worked out after the fashion of the members of a finely-shaped human body.”
And pretty much since then architects have attempted to use human proportions as a basis for their planning and construction decisions; perhaps most famously Le Corbusier with his Modular theory. Developed throughout the 1940s and published in 1950 as “The Modulor: A Harmonious Measure to the Human Scale, Universally Applicable to Architecture and Mechanics”, Le Corbusier’s theory envisaged a future in which all construction decisions were based on a grid derived from the proportions of a man of a standardised size: 2.20 metres with upraised arm. And being Le Corbusier he didn’t just leave it as a theoretical discussion but built houses according to his measurements, including his 1947 Unité d’Habitation in Marseilles and the Unité d’Habitation Berlin from 1957. Using Le Corbusier’s fascination with human proportions as their curatorial focus Le Centre Pompidou promise a presentation of some 300 objects through which the organisers aim to explain and demonstrate the full breadth of Le Corbusier’s oeuvre rather than the usual focus on his more familiar architecture and furniture projects.

“Pathmakers Women in Art, Craft and Design, Midcentury and Today” at the Museum of Arts and Design (MAD), New York, New York, USA

The old adage teaches us that if you want to ensure you are never unemployed become a chef or undertaker: people will always need to eat, people will always die. To that list one can now comfortably add gender studies; past decades having seen sociologists manage to extend the study of gender to every but every aspect of contemporary culture. There is it would appear no end to the creativity with which they can find ever newer niches to explore. And so no shortage of work for gender studiers.
Naturally this also includes architecture and design, thankfully, for over the years female creatives have generally had a bad deal. Or indeed a very bad deal. In these pages we’ve often discussed, for example, the subservient roles the likes of Ray Eames, Lilly Reich or Charlotte Perriand were forced to accept or the lack of real opportunities offered to female Bauhaus students, despite the institutions self-proclaimed gender equality; and so while yes there were exceptions, for every Eileen Gray or Marianne Brandt there are an awful lot of Edith Heaths, Ruth Asawas or Alice Kagawa Parrotts – to name just three of the creatives featured in Pathmakers. In addition to looking at the work and careers of designers from the 1950s and 60s the exhibition will also present works by current female designers and artists, including, for example, Magdalene Odundo, Hella Jongerius and Front Design and will thus seek to extend the discourse on the role, influence and position of female creatives from the historical to the contemporary. 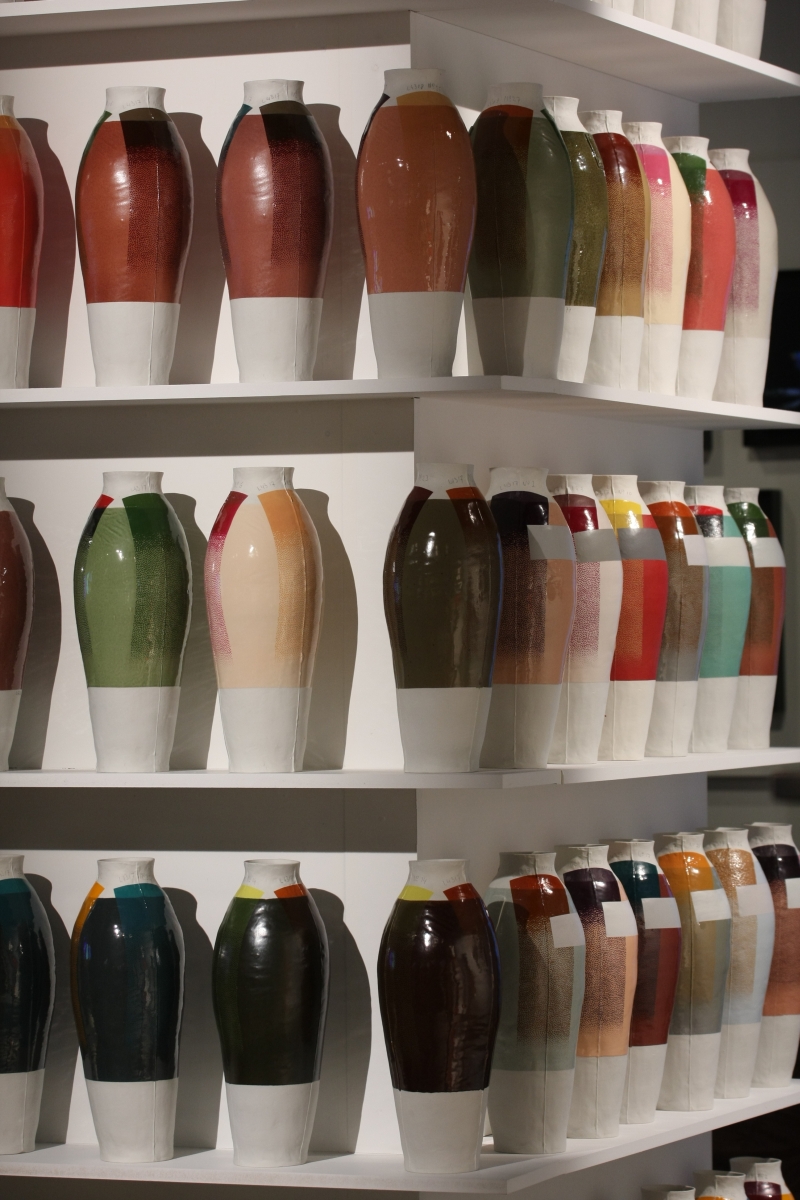 “Hamster Hipster Handy. Under the Spell of the Mobile Phone” at the Museum Angewandte Kunst, Frankfurt, Germany

That the first “mobile” telephones were anything but is something only those of us of an “older semester” can appreciate. Try explaining it to today’s kids.
And then explain that back then nobody could have foreseen just what a central component of everyday life the mobile phone would become.
Blank stares will ensue. And then the question if we oldies aren’t also a bit thick.
Exploring the cultural phenomenon that is the mobile phone and for all the unique and singular role the mobile phone plays in defining and shaping both our modern society and the modern “I”, Hamster Hipster Handy focuses on the two poles of our dependence on mobile phones: the negative as exemplified by radiation tests carried out Hamsters to assess the safety of mobile phones, and the positive example of the mobile networked, globally active Hipster. The Handy in the exhibition title is the German word for mobile phone: and keeping it in the title provides a handy alliteration. In addition to a collection of photographs, art, video and interactive installations by over 50 international artists, including, for example Anne de Vries, Ai Weiwei and Peter Boettcher, Hamster Hipster Handy also promises a presentation of related articles from everyday culture through which it is intended to place the development of the mobile phone in a cultural context, and also a collection of mobile phones from down the years by way of explaining the history of such to those cheeky young scamps we met at the start of this text.

Hamster Hipster Handy. Under the Spell of the Mobile Phone opens at the Museum Angewandte Kunst, Schaumainkai 17, 60594 Frankfurt am Main on Saturday April 25th and runs until Sunday July 5th 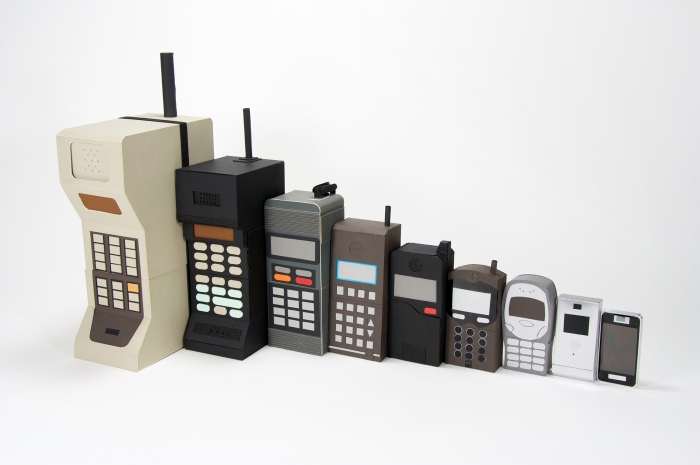