“I am rather silent, resolute and industrious. I can use any tool or machinery with dexterity.”

So described a 21 year old, and apparently extremely self-confident, Harry Bertoia himself on his application for Cranbrook Academy of Art.

That the boast was anything other than hollow is something Harry Bertoia was to go on to prove. Repeatedly and in many fields. 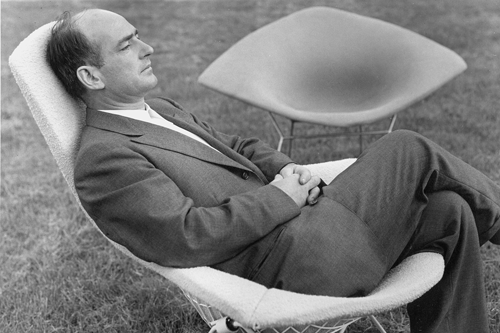 Born in San Lorenzo, Italy on March 10th 1915 Arieto Bertoia moved to Detroit in 1930 to join his older brother Oreste who was already living in the city.

And anglicised his name to Harry Bertoia.

A classical example of a prodigious artistic talent Harry Bertoia initially studied art in Detroit before in 1937 he was awarded the aforementioned scholarship for Cranbrook Academy of Art where he studied painting and drawing, and got to know the likes of Walter Gropius, Carl Milles, Charles Eames, Maija Grotell, Florence Knoll, Eero Saarinen, Ray Kaiser et al.

In 1939 Cranbrook Academy of Art Principle Eliel Saarinen, father of Eero, asked Bertoia if he would be interested in taking over the metal workshop at Cranbrook, Bertoia was, and over the coming four years taught metalwork and jewellery design in addition to developing his own sculpture and painting projects, including a series of monoprints which he sold to the Guggenheim Museum of Non-Objective Art, the forerunner of the modern Guggenheim Museum, for the princely sum of $1000.

In 1943 Harry Bertoia left Cranbrook and moved to Los Angeles to join Charles and Ray Eames‘s expanding design studio, and for all to assist with the development of Charles Eames’s experimentations with moulded plywood. Although the personal links between the three were very close, Harry Bertoia for example had created Ray Kaiser’s wedding ring, Bertoia felt his contribution to the joint projects was undervalued, all work was publicly only credited as “Eames”, and so in 1946 he left.

After taking a series of jobs Harry Bertoia was approached in 1950 by Florence Knoll with an invitation to work with her and her husband Hans’s fledgling furniture company, an offer Bertoia duly accepted and which resulted in 1952 in the release of the Diamond Chair collection – one of the best known examples of 1950s American furniture design, a product family which placed Harry Bertoia alongside Eames, Nelson, Saarinen et al at the forefront of mid-century American modernism, and a commercial success which gave Harry Bertoia the financial security to concentrate on his sculpture work: For much like his contemporary Isamu Noguchi, Harry Bertoia always understood himself primarily as a sculptor, and much like Noguchi saw his product design work as an exploration of the borders of his sculpting and an opportunity to test his art in other contexts.

Over the course of his career Harry Bertoia created an estimated 50,000 sculptures, some 50 sculptural objects and interventions for public buildings and spaces, and from the early 1960s onwards turned his attentions ever more to music.

Inspired by childhood memories of watching Hungarian Gypsies repair and make metal kitchenware and fascinated by the universality of a sculpture as a musical instrument which everyone could “play” regardless of talent or training, Harry Bertoia created a series of so-called tonal sculptures, largely created from rods of differing metals, lengths and thickness, but also featuring gongs and other hanging constructions, and with which he recorded and produced 11 albums in his barn in rural Pennsylvania.

Released under the title “Sonambient” the works remain as avant-garde and challenging today as they invariably were when first released, moving as they do from passages of almost spiritual beauty to unforgivingly brutal sensory assaults. Even if at times they do get a little bit too close to bell-ringing for our liking.

Currently out of print all 11 albums will be re-issued to mark Harry Bertoia’s 100th anniversary, and in addition a Kickstarter project is running to raise the necessary funds to digitalise, and so preserve, the 350+ cassettes of tonal sculpture recordings in the Harry Bertoia archive.

We hope they succeed*, it would certainly be a fitting gift for one of our most original designers on his 100th birthday.

*UPDATE: The Kickstarter fund successfully reached its goal and in addition the 11 Sonambient albums are now available in a box set complete with a 100 page booklet through Important Records (Catalogue Number IMPREC419)