2016 sees the 20th anniversary of German architecture and design magazine A&W’s “Designer of the Year Award.” Following on from previous recipients including Achille Castiglioni in 1997, Paola Navone in 2000, Gaetano Pesce in 2006 and more recently Werner Aisslinger in 2014 and Michele De Lucchi in 2015 the 20th recipient is Jasper Morrison. And that, joyously, means a Jasper Morrison exhibition during the 2016 Passagen Cologne interior design week. 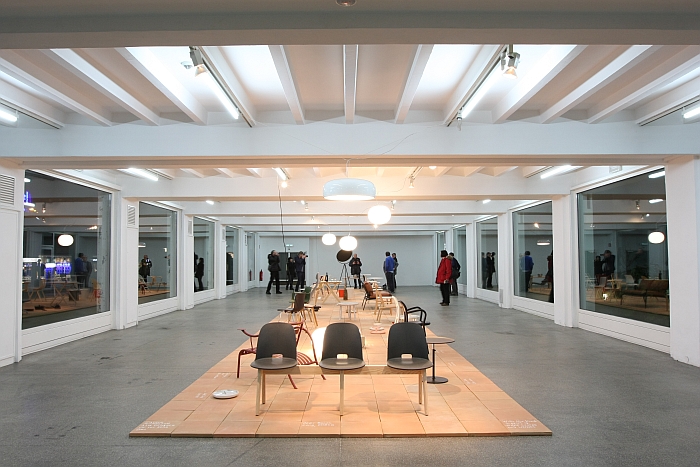 A&W Designer of the Year 2016 – Jasper Morrison. The exhibition.

Born in London Jasper Morrison studied at Kingston Polytechnic Design School and the Royal College or Art London before establishing his own studio in 1986. After taking his first, tentative, commercial steps with London based SCP, Jasper Morrison made his international début in 1986 when Milanese manufacturer Cappellini released his Thinking Man’s Chair. In the course of the subsequent 30 years Jasper Morrison has worked on furniture and lighting projects with companies as varied Vitra, Magis or Flos, in addition to completing numerous kitchenware, accessory and electrical goods projects for the likes of Samsung, Maharam or Alessi. In 2015 the Centre d’innovation et de design au Grand-Hornu in Belgium honoured Jasper Morrison with the retrospective “Thingness “, the first retrospective of a designer for whom “reduced” can just as easily be applied to his public persona as his designs. Why then the decision for the retrospective?

“It just felt time”, Jasper Morrison responds,”they asked me if I would be interested in doing it and I thought it was a good moment to review it all, its three decades of work…..”

And was that a pleasant experience, we ask……

“Yes very much so, it was very nice, and I was very pleased that there was a consistency between the different periods of work”

This consistency can also be seen in the showcase in Cologne. As ever to call the A&W designer of the year award show a retrospective would be to over-egg the pudding to the point of inedibility: it is a fleeting overview of a designers commercial oeuvre, but enough to provide a fleeting insight of the importance, and ideally the relevance, of the chosen designer. In Jasper Morrison’s case that includes objects such as the Air Chair for Magis, Plywood chair for Vitra, the cast iron cookware collection developed for Oigen and, naturally, the 1986 Thinking Man’s Chair. 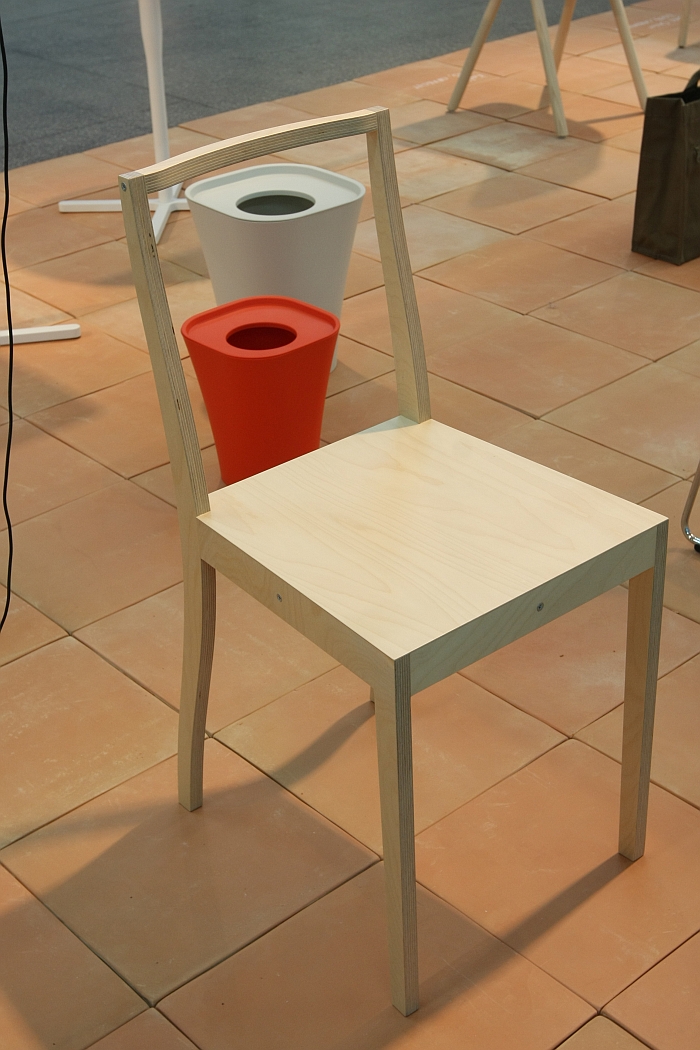 Plywood Chair by Jasper Morrison through Vitra and the bin Trash for Magis, as seen at the A&W Designer of the Year 2016 exhibition

Being as it is an overview of Jasper Morrison’s commercial oeuvre the A&W showcase excludes what for us is one of the more intriguing and interesting moments in Morrison’s career. Berlin. In 1982, and while studying at the Royal College, Jasper Morrison was offered a scholarship to spend a year in Germany and decided, principally on account of personal contacts, to attend the Hochschule die Kunste, HdK, in Berlin. The decision for Berlin saw him not only become acquainted with the controlled chaos that was 1980s West Berlin, but also the fledgling neue deutsche Design scene. As older readers will appreciate we could talk to Jasper Morrison for days, if not weeks, about his experiences in Berlin, managed however to restrict ourselves to a couple of quick questions, including the background to the text “The Poet will not Polish” which he wrote for the catalogue to the 1982 HdK exhibition Kaufhaus des Ostens, a text which counts amongst our favourite writings on design and which is the most delightful explanation of how the Post Modernist designers of the 1980s sought to emancipate themselves, and indeed society, from the thinking of the inter-war functionalists. Did that text originate in London, we asked, did the young Morrison arrive in Germany with such thoughts as part of his baggage?

“No I wrote that text in Berlin”

So the inspiration came from your time at the HdK?

“……or my time not at the HdK! More wandering the streets looking around!”

And did you have contact to the other neue deutsche Design communities?

“Yes, there was for example an exhibition called Möbel perdu in Hamburg and there we met people from cities such as Cologne or Düsseldorf, and so one was very aware of a scene and it was all fascinating. There was one chap I remember who had created a Rietveld chair in rubber, which was wonderfully floppy, it was a good time….”

…and are those experiences that remain with you today, or….

“No, its too long ago now, it must have been formative moments, but now its all so long ago”

But works like the Handlebar Table, is that still a piece Jasper Morrison can appreciate and can relate to?

“Yes, and I think if you were to include it here it would fit in, its not a million miles away, but I couldn’t imagine creating such a piece today” 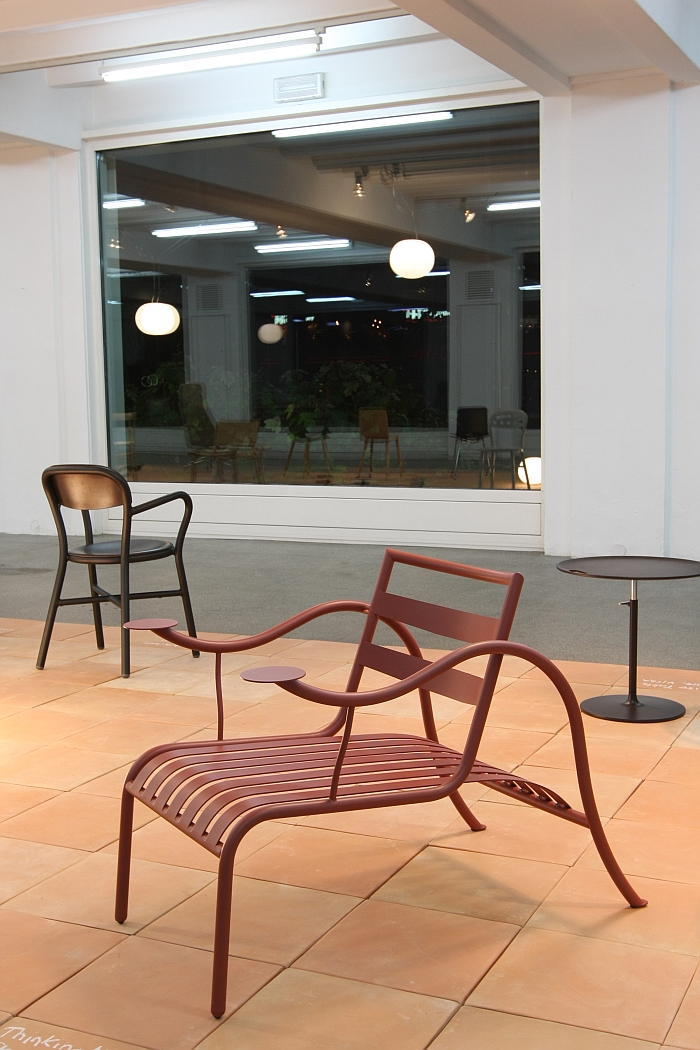 Thinking Man’s Chair by Jasper Morrison for Cappellini, as seen at the A&W Designer of the Year 2016 exhibition

In recent years Jasper Morrison has been particularly evident through his regular cooperations with, lets says, less universally known companies; the Vitras and Cappellinis of this world still get their new objects but so do companies such as Nikari, Maruni or, and for us most interestingly, Mattiazzi. Established in 1979 Mattiazzi spent neigh on 30 years crafting wooden components for the furniture industry before deciding to go into production themselves and hiring Munich based designer Nitzan Cohen to design their first collection. In the shortest of time Mattiazzi have established an impressive roster of designers including Ronan & Erwan Bouroullec, Konstantin Grcic and Jasper Morrison. The question for us has always been why a Jasper Morrison decides to work for a brand such as Mattiazzi?

“They are a nice company, are very fresh and it is quite rare that a company approaches you that doesn’t have a huge back catalogue, and so with a company like Mattiazzi you are a bit freer than when you work with a more established company with their whole weight of history behind them.”

Like, we venture, in the early days with Vitra and Cappellini when they didn’t have quite the name they have today and so as a designer one was a little freer?

And if the exhibition here and Thingness are looks back, looking forward…..?

“There is no big game plan”, answers Morrison, “projects come along, and if they are interesting you do them.”

What arises when Jasper Morrison undertakes projects which interest him, and that with a degree of freedom, can be enjoyed in the 2016 A&W Designer of the Year exhibition.

The Jasper Morrison A&W Designer of the Year 2016 exhibition can be viewed at the Kölnischer Kunstverein, Hahnenstraße 6, 50667 Cologne until Sunday January 24th. 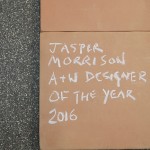 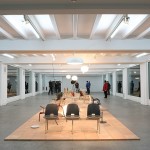 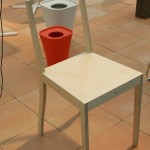 Plywood Chair by Jasper Morrison through Vitra and the bin Trash for Magis, as seen at the exhibition A&W Designer of the Year 2016 – Jasper Morrison, Passagen Cologne 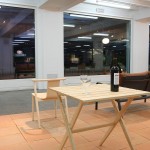 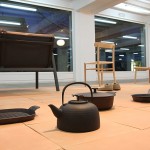 Cast iron table and cookware for Oigen, Japan, as seen at the exhibition A&W Designer of the Year 2016 – Jasper Morrison, Passagen Cologne 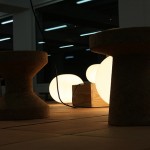 Glo-Ball for Flos & Cork Family for Vitra, as seen at the exhibition A&W Designer of the Year 2016 – Jasper Morrison, Passagen Cologne 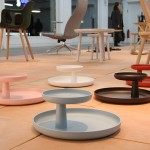 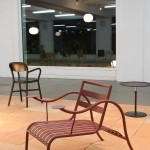 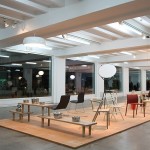