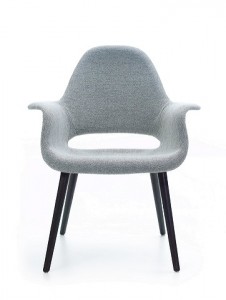 Organic Chair by Charles Eames and Eero Saarinen through Vitra

It may not be the most universally recognised example of either Charles Eames‘ nor Eero Saarinen‘s canon however their 1940 “Conversation Chair” is without doubt one of the more important examples of 20th century furniture design.

Designed for the New York Museum of Modern Art’s “Organic Design in Home Furnishings” competition the Conversation Chair was a concept piece and Eames’ and Saarinen’s first attempt at moulding synthetics.

At that time however the technology lagged somewhat behind the designers imagination and it was to be almost a decade before either Charles Eames or Eero Saarinen could transform the lessons learnt into commercial products: Charles Eames with his fibreglass/plastic armchairs for Herman Miller and Eero Saarinen with his Tulip Chair for Knoll. 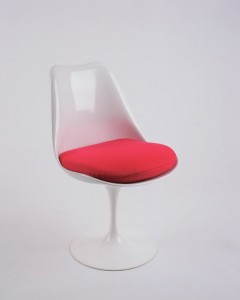 For the sake of completeness we should also mention George Nelson‘s Swag Leg Chair, a design which relies heavily  – albeit with permission – on both the technology and narrative of the Conversation Chair.

Currently marketed by Vitra as the “Organic Chair” Eames and Saarinen’s pioneer work remains a wonderfully confident yet unassuming chair that can be used in all domestic, commercial and retail settings.

And you can win one.

The designer furniture retailer network Creative Inneneinrichter – of which (smow) is a member – is offering an Organic Chair as first prize in their “My way to the VitraHaus” competition.

Second prize is a Vegetal by Ronan and Erwan Bouroullec and third prize a Panton Chair.

The rules are very simple: Document your journey to the VitraHaus; the most imaginative, creative and original entry wins.

And so whether your planning skydiving onto the VitraHaus, negotiating the Alps Hannibal-esque with elephants or rafting down the Rhein simply register at the Creative Inneneinrichter website and upload your photos/videos/certificates.

Full details can be found at “Mein weg ins VitraHaus”

Although Jasper Morrison built a bus stop next to the VitraHaus - travelling by bus probably won't win you the Organic Chair.