Although one primarily goes to Kazerne Eindhoven to experience experimental, challenging, yet invariably accessible and pertinent design, during Dutch Design Week one also gets the chance to experience young, emerging, furniture brands.

At Dutch Design week 2016 we were particularly taken with the presentation by Dutch brand Functionals.

Tracing its origins back to 1972 and the establishment of a metal workshop in Goirle, near Tilburg, by Henk van Esch, the contemporary Functionals was established in 2009 by Henk’s sons Ad and Simon who transformed their father’s largely supply/subcontractor business into a more consumer/customer orientated business. A move which neatly parallels the recent histories of several European manufacturers – a generation change bringing a new perspective

Still based in the original premises in Goirle Functionals cooperate today with an interesting roster of designers, both Dutch and international, including, and amongst many others, Bertjan Pot, Dick van Hoff and Jan Habraken, and although we can’t say that much about their collection as a whole, being largely only familiar with it virtually, the three products presented at Kazerne very much appealed. Which yes, sounds encouraging for the rest of their collection. 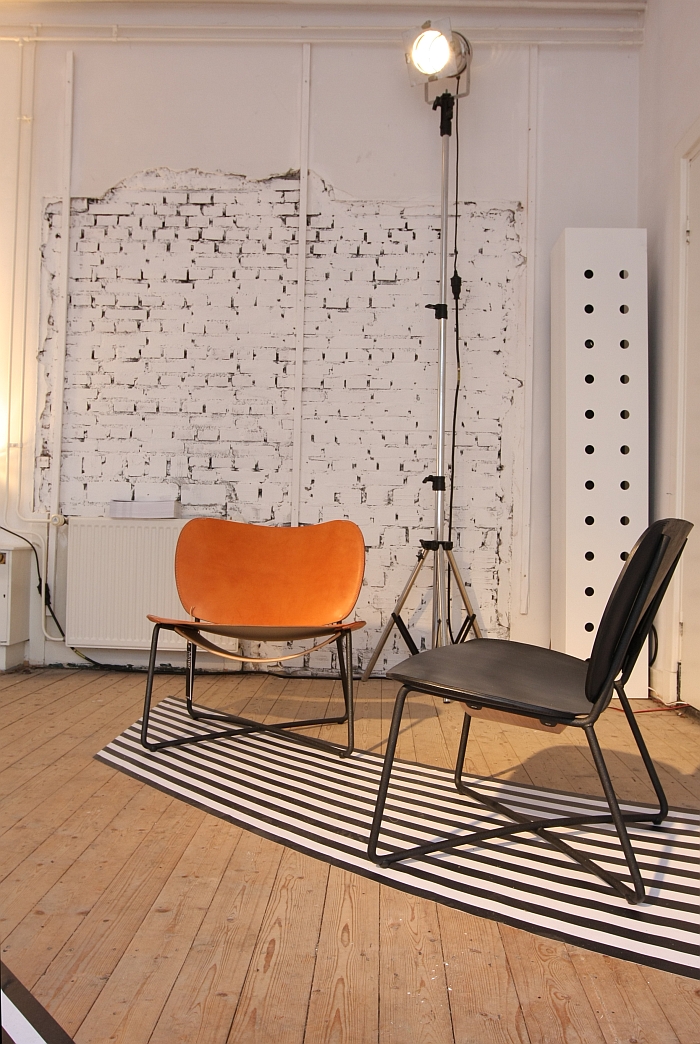 In these pages we have oft made reference to an increasing preponderance for very wide backed, low slung, lounge chairs. A typology of which we thoroughly approve and of which the Miller Lounge Chair by Serener a.k.a Christoph Seyferth is a particularly magnificent example. Presenting itself unquestionably, and quite deliciously, with more than a touch of Wegnerian reduction and self-confidence, the backrest and seat are formed from saddle leather, and saddle leather alone. A powder coated tubular steel frame and wooden shock absorber providing the necessary support and comfort. And that with great competence.

The Miller lounge chair is complimented by an ottoman, an object which in our opinion has to be used with the high back version. We tried it without.

But not something we’d classify as a design fault, but rather as extremely satisfying. 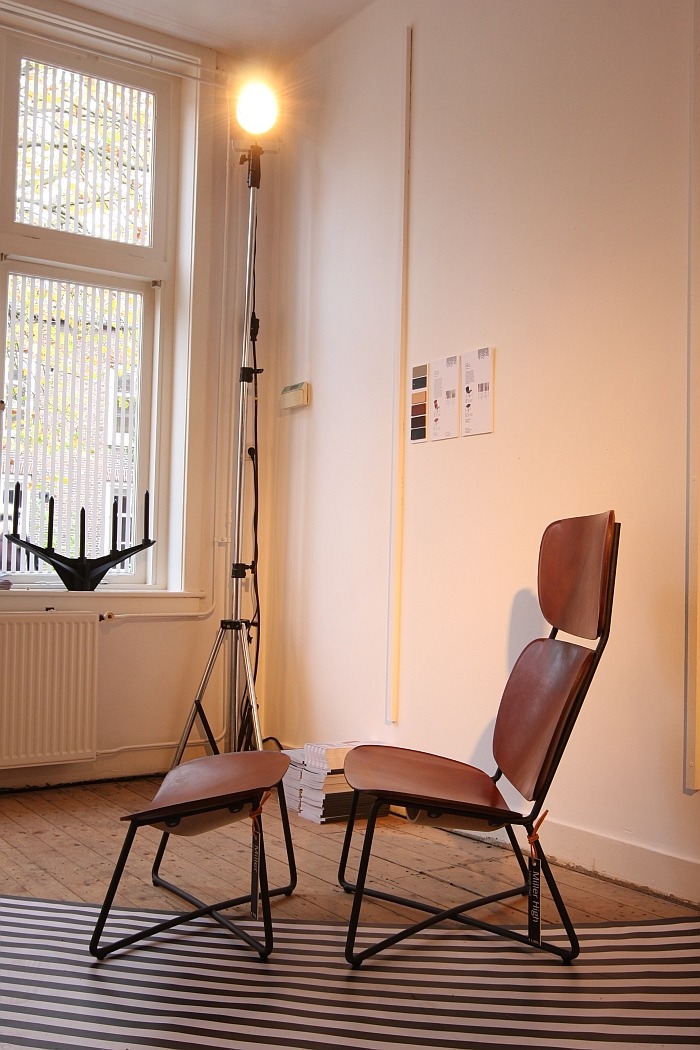 We first came across Twist by Thomas Schnur at the Funktionsraum exhibition he staged during the 2016 Passagen Design Week in Cologne, where we noted that it represented an example of Thomas’s search for “an optimisation of function through a simplicity of construction and simplicity of form”. Or more precisely, through twisting a flat piece of metal one adds strength without adding volume or material.

In Funktionsraum Twist was presented as a stool prototype, for the Twist Table the addition of struts at two-thirds height was necessary in order to optimise the stability. If we’re honest we spent a long time in Kazerne sitting on the floor trying to work out if we approved of the struts. Before deciding we do. Not least because the addition of the horizontal level completes the composition, adds a visual as well as a static tension. And having subsequently bumped into Thomas Schnur at Orgatec Cologne we realised we really, really do like them, because in conversation with him it became clear that the alternative would be thicker steel legs. And we can’t imagine we’d like that.

All in all a very pleasing further development of the project. And one which leaves us expectant of what is still to come….. 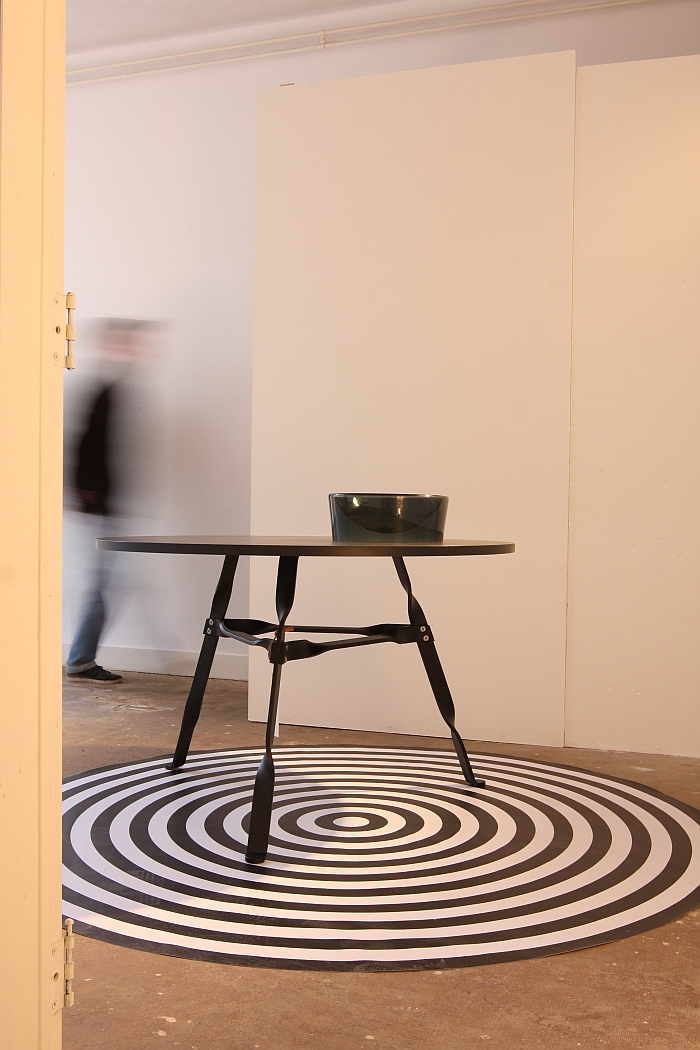 The only slight issue we have with the Ossa storage modules by Berlin based studio Geckeler Michels is the fact they appear to be named after the Ossastrasse in the Rütli-Kiez in Berlin-Neukölln. Honestly, put a woolly hat on them and you’ll have pressed all the Hipster buttons.

Conceptually nothing more revolutionary than an abstracted cardboard moving box, Ossa can be constructed into sideboards through simply stacking one on top of or next to the other; in which context we were particularly taken by the raised wings on the top edge of the units. Raised wings which not only provide for a more or less seamless vertical connection between two units but also mean that the top of the units can be used for the safe and unproblematic storage of not only books, phones and dog leads, but also loose change, keys and marbles. Nothing is going to fall off. Sounds obvious? Trying putting a marble on top of most modular storage box systems.

Crafted from powder coated steel there is nothing formally nor conceptually challenging about the system, and because the units can be placed with the opening facing left or right the system can also function as a room divider. In which context, magnetic felt panels are available for the backwalls and thus allowing a little acoustic damping. The hand grips in the sides meanwhile not only allowing for effortless moving and repositioning, but also remind one of the system’s origins.

By which we mean cardboard moving boxes. Not Neukölln. 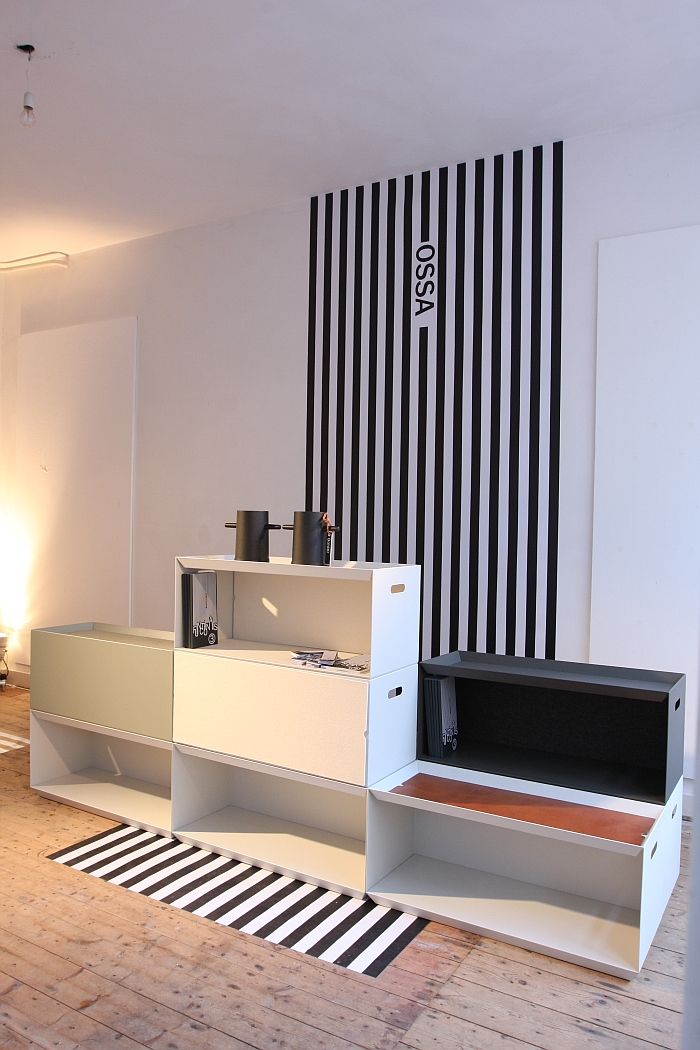