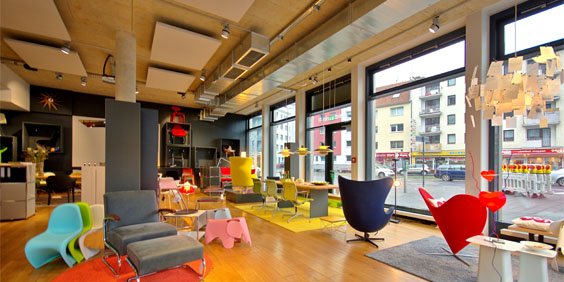 Seating in the German Bundestag – How politicians and decision-makers sit

The German Bundestag election in autumn 2021 will once again see a new round of "musical chairs" and with it the hope of the political representatives to sit on one of the strikingly blue chairs for the next four years. And while it is clear that the candidates are not interested in the chair itself, it has been providing for stability and amenity for many years and knows how to present itself. Which may be a metaphor. But how does a chair actually get into the Bundestag and what qualifications do you need? A trip to the seat of power and a homage to the long-lasting Vitra Figura.

From Apollo to Kaiser Wilhelm

It is well known that seating has always been closely related to political and religious power, the best example being the throne, a symbol of kings and gods since ancient times, across countries and religions. Thus not only Buddha or Shiva and Parvati have a representative seat, but also the Pope has a Holy See – a symbolic term for his office as Bishop of Rome. Over the centuries, the chair has become a democratic object in our secular everyday life, one on which we work, think, eat, celebrate or dream. But while one is considering serious questions such as Tanqueray or Sapphire, others are about much more far-reaching decisions that affect local and global society. It goes without saying that this cannot be undertaken on just any kitchen chair, but requires a chair of high standing. And even if politicians often sit between chairs, it should still be comfortable. After all, the longest session of Parliament to date lasted over 20 hours.

Bella Figura – a chair with a history

At first glance, the rather cool, grey ambience of the hallowed halls in Berlin's Reichstag doesn't exude too much Italian charm. And yet in the midst of the staging is the shining blue Figura, a work designed in 1984 by the Italian designer and architect Mario Bellini and his colleague Dieter Thiel for the Swiss company Vitra and produced in Weil am Rhein. The model, which was originally designed as an office swivel chair with an inviting seat and clear backrest, rests in the standard version on a base made of aluminium and steel with five castors, is comfortably upholstered and covered with fabric or leather. In addition to the wide range of options for a wide variety of settings and postures, the comfortable armrest with its logical shape invites one to lean in and think more deeply. A straightforward, sincere chair full of functionality and openness, which complements the German conscientiousness and discipline with inner longing. And whose backrest upholstery ends in a constricted waist, which makes it appear surprisingly elegant and light, a touch of Dolce Vita in the middle of everyday office life. And that with clear lines and simple elegance – what better way to create a good and lasting story.

Moving into the Bundestag

The Vitra Figura's first appearance in German political life was in 1992, when it was appointed to the Bonn Bundestag in a special version and was allowed to furnish the then new plenary hall, upholstered in a neutral royal blue, a colour that shouldn't reflect any of the political parties. Today the colour of chairs is all the more vehemently separated from any political stance and called the colour of democracy. When the parliament took place in the redesigned Reichstag building in Berlin's Spreebogen in 1999, the Bonn concept could not simply be copied. The British architect Norman Foster initially developed new plans, however the Figura chair from Vitra was deemed such a central component of post-unification German democracy that it was, not least at the behest of parliamentarians, retained, and allowed to continue its stylish success story in Berlin.

When the camera pans through the grey plenary hall of the Reichstag, one breathes a sigh of relief to see the bright blue of the chairs flashing beyond the German and European flags: draping the seating in a grey, as originally intended, would have been too much of the unpleasant side of politics. Based on a colour concept by the Danish artist Per Arnoldi, Foster chose a deep blue colour with a violet touch for the new special version of the Figura, which he called "Reichstags Blue" and which he had protected as his own colour. And one which not only allows for a suitable contrast that harmonizes perfectly with the exposed concrete surfaces and numerous grey tones of the walls, tables and carpets but is ideal for television broadcasts. The fact that the chairs in the German Bundestag are something special is also proven by the upholstery made of high-quality and durable wool, which was specially selected for the Bundestag. Perhaps because here people slide back and forth on the seat even more nervously than anywhere else, whereby, if necessary, you can also hold on to the armrests, which were made of wood in Bonn, but are black plastic in Berlin.

The distribution of seats in democracy

All taken together the main chamber of the Reichstag offers space for just over 1000 people, although not all seats are the same. Except for their weight of around 25 kilos. The chairs of the Chancellor and the President of the Federal Council have a higher backrest. The chairs of the presidium are on castors and therefore freely movable. A freedom not afforded all MPs: the remaining chairs being firmly anchored on pillars in the floor, with the exception of the chairs in the front rows which can be moved back and forth on rails, aiding and abetting rising in heated debates and allow more physical freedom of movement. The stenographers, in contrast, are supplied with round stools in “Reichstags blue”.

Vitra – the power of good instinct

It should be no surprise that the Figura chair comes from Vitra, after all, the Swiss company has demonstrated a keen sense for the right shape since 1950 and unites the most well-known representatives of design and architecture under its roof and on its Vitra Campus. The seating and reclining furniture by Charles and Ray Eames or the Panton Chair are still among the most successful products of the home and office furniture manufacturer. And the Vitra Figura can add numerous design prizes to its political impact. However, if you want to sit on the Italian classic in the Reichstag look, you have to get yourself elected to the Bundestag. The model is no longer in the Vitra portfolio. Vitra having taken long-term precautions to protect against the unsightly image of a Bundestag with mixed seating.

Just a few minutes' walk from the Bundestag is another classic chair in a prominent position. When Angela Merkel is not sitting in the Bundestag, she can often be found in the Chancellery on a Vitra Aluminium Chair EA 117: a contemporary throne designed in 1958 by Charles and Ray Eames. A work that openly presents its considered construction, a construction which does without the seat shell, and which in Angela Merkel's case is crafted from black leather stretched tightly between two aluminium brackets. Clear, flowing and dynamic, it adapts ideally to the spine and thus ensures an upright posture. A chair that is both controlled and humane, light-footed and stable at the same time, and gives a secure feeling in turbulent times.

From Round Chair over the East River

It is obvious that our furniture, and especially seating furniture, reflect our values and attitudes, whether in the Chancellery or in your own home. And in public settings generally has more meaning than it might appear at first glance. For example, the Round Chair by Danish designer Hans J. Wegner was used for the broadcast televised debate between John F. Kennedy and Richard Nixon in 1960. A chair with a restrained design language that is attractive from all sides and combines simplicity, elegance and expertise. A symbol of modesty and closeness to the people and thus a well-chosen and well-placed accessory. The Dutch designer Hella Jongerius also created a chair for the UN headquarters in New York that speaks for itself and with its open shape and colourful fabric surface signals the courage to change – East River Chair is the name of this unusual and more than inviting model. The series of important, decision-making seats and their subtle statements about authority, control, transparency, openness, plurality, serenity and even do-it-yourself is long. Which chair suits which function and above all which person can of course not be generalized. As a rule, what goes together comes together. It is clear that true classics not only embody style, exude charismatic sublimity and promise sovereignty, but that they usually also have a long history. And furniture with history remains important, accompanies us over time and demands to be passed on. To continue its history.