Arne Jacobsen was born on 11th February 1902 in Copenhagen and studied architecture at the city's Royal Danish Academy of Fine Arts. Despite working his whole career as a practising architect, Arne Jacobsen is unquestionably best known for his furniture designs: many of which have risen to become established global design classics. Arne Jacobsen's furniture designs are distributed through Fritz Hansen, and include popular works such as the Series 7 chair, and the Egg Chair. In addition to seating Arne Jacobsen also designed numerous lamps which are available today through Louis Poulsen. In his work both as an architect and as a designer Arne Jacobsen was primarily influenced by Ludwig Mies van der Rohe, Le Corbusier and the protagonists of the Bauhaus school. Arne Jacobsen's synthesis of the arts: The Royal Hotel in Copenhagen

In 1956 Arne Jacobsen was commissioned to build the new SAS Royal Hotel in Copenhagen; a commission which in addition to the architecture also included designing the interior, the furniture and the details such as, for example, the cutlery. Thus Jacobsen received a unique opportunity to realise his vision of an integration of design and architecture. Among the furniture designs that emerged from the project are the Egg, the Swan armchair, Swan sofa, and Series 3300; all produced today by Fritz Hansen and all long established and much loved furniture design classics. On account of extensive renovations and alterations in the 1980s and 1990s a lot of the original Jacobsen work has been lost; but the memory of the grandeur of the project remains, not least through the numerous furniture designs. Design classics Egg, Drop, and Swan at the SAS Royal Hotel in Copenhagen

The SAS Royal Hotel Copenhagen was commissioned by the Scandinavian airline Scandinavian Airlines System (SAS). With the hotel Arne Jacobsen realised the first building in Denmark in the so-called international style with a curtain wall façade of glass and steel; and created a construction which caused discourse and conversation amongst critics and the general, lay, population. Among other comments Arne Jacobsen was accused of having created a work where the façade like a piece of blotting paper with an invoice stuck on it or that his admiration for Mies van der Rohe was indeed visible, but had been implemented in a most insipid style. The lobby of the SAS Hotel with Arne Jacobsen's Swan Chair

In addition to the physical building Arne Jacobsen was also responsible for the complete interior design of the SAS hotel - including furniture, lamps and textiles. For the foyer and bedrooms Jacobsen designed the sofa series 3300, the chair Drop and the chair and sofa versions of the Swan and Egg. The well-known Series 7 chairs were used as dining room chairs for the restaurant Alberto K. and in addition to the furniture Arne Jacobsen also designed the textiles and lamps for the hotel. The Jacobsen wall, table and floor lamps could be found in the entire hotel and are still produced today by Danish manufacturer Louis Poulsen. An original interior impression of Jacobsen's SAS hotel, including the classic Drop Chair

In addition to the numerous furniture objects Arne Jacobsen also designed the lighting for the SAS Hotel Copenhagen. The best known examples are without question the AJ floor lamp and the AJ table lamp, works which are now distributed by the Danish designer lamp manufacturer Louis Poulsen. The Arne Jacobsen lamps are available in a range of colours and reflect in their pared down purity Arne Jacobsen's understanding of the Scandinavian design tradition. Both the Arne Jacobsen Floor Lamp and Table Lamp represent excellent examples of functionalist design; consequently it is no surprise that even today, some 50 years after their creation that both still look as fresh and modern as ever. The Royal Hotel in Copenhagen today

Even though today following large-scale renovations the Royal Hotel Copenhagen has lost many of Arne Jacobsen's original feature it remains a testament to the architect and his vision. In the late 1990s, the then 30-year old hotel furniture, was replaced and the entire interior updated to meet modern safety and comport standards and trends. Some original elements however have been retained or reintroduced, such as the use of Arne Jacobsen AJ cutlery in the restaurant. In Perhaps most importantly, one of the rooms, room 606, has been preserved in its original state and when not in use it can be viewed and enjoyed in its 1960s blue-green glory. In addition, the Danish Museum of Art & Design includes in its permanent collection an exhibition of Jacobsen's SAS hotel furniture and photos. The famous Series 7 by Arne Jacobsen

More about 'Arne Jacobsen' in our blog 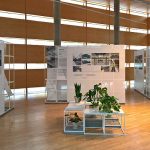 Gesamtkunstwerke – Architecture by Arne Jacobsen and Otto Weitling in Germany at Felleshus, The Nordic Embassies, Berlin 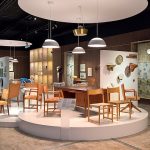 ..."Hvis jeg får et nyt liv, vil jeg være gartner", opined once the Danish architect and designer Arne Jacobsen... "If I have another life, I want to be a gardener" Not that, as Arne Jacobsen – Designing Denmark at Trapholt, Kolding, would tend to imply, he made an incorrect career choice... 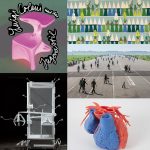 ..."Arne Jacobsen – Designing Denmark" at Trapholt, Kolding, Denmark He didn't... There can however be little question of the contribution of Arne Jacobsen to the (hi)story of, and understandings of, design in Denmark... 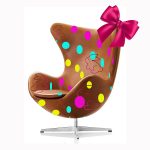 ...The 3316 Easy Chair by Arne Jacobsen a... - and which saw each of the five Nordic nations present a self-initiated room installation: Sweden presenting a theatre foyer with furniture by Bruno Mathsson; Norway recreating the "vestibule of a high mountain hotel"; Iceland "the atmosphere of the museum"; Finland, and pushing national stereotypes as far as they could without breaking them, a sauna anteroom, while Denmark was represented by a presentation of "la chambre d'hôtel moderne" by Professor Arne Jacobsen, the catalogue noting that "this theme is particularly topical because M... 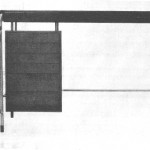 ...At the same time as he was developing the Ant Chair, Arne Jacobsen created a one-off range of office furniture that arguably represents the first tangible evidence of his move away from the natural materials and traditional handicrafts of his pre-war furniture and onto the mixed media, industrial products that have ultimately come to define his work... In 1951/52 - the records are a little unclear here - Arne Jacobsen was commissioned by the Copenhagen based shipping company Burmeister & Wain to produce a gift for the American Scandinavian Society and designed a desk, coffee table and side chair group...