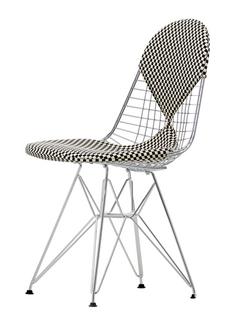 3% advance payment discount*: 722,65 € (Save 22,35 €)
* incl. VAT, incl. shipping (Austria, Germany)
Four design legends unit with the Vitra DKR Wire Chair Checker. The design of the chair is assigned to the couple Eames, but Harry Bertoia had also made his contribution to this, because he pushed the processing of the steel wire in such a way that this chair was even possible. With the Checker cover, the designer Alexander Girard, who is well-known for his fabrics and accessories, is also involved.

With the DKR Wire Chair, the designers Charles and Ray Eames developed a formal adaptation of their legendary Plastic Chairs; however, instead of fiberglass, the Eames realised the one-piece seat shell with welded steel wire. The striking feature of the Vitra Wire Chair DKR is the symbiosis of the seat and frame combined with the organic shape of the seat shell. The so-called Eiffel Tower frame finds its optical equivalent in the close-meshed steel framework of the seat shell. As with the Eames Plastic Chairs, the seat shell of the Vitra Wire Chair can also be combined with various frames. The Wire Chair, Vitra has been producing the Eames chair since the 1950s. In addition, in 2013/14, Vitra developed a black powder coated version, the DKR Black, which is also suitable for outdoor use, and launched the DKW, with a seat shell of steel wire combined with the wooden frame known from the Eames DSW Detail of the DKR Wire Chairs with Bikini covers

In the history of twentieth-century design Ray and Charles Eames are unquestionably among the key protagonists, and their designs have lost none of their relevance to this day. In 1940, Ray Kaiser and Charles Eames met at the Cranbrook Academy where they collaborated on the "Organic Furniture in Home Furnishings" contest and got married the following year. In 1943 they founded the Eames Studio in Venice, California, where in the following years not only the legendary Eames furniture designs, but also textile designs, films, toys and architectural designs were created. The Vitra Wire Chair was launched in 1951, shortly after the Plastic Chairs. Until the death of Charles Eames and the subsequent closure of Eames Studios in 1978, many more designs were added that are now among the design icons of the twentieth century, including the Eames Lounge Chair and Aluminium Group. The DKR Checker as an eye-catcher in the hallway

Vitra's company history has been closely associated with designers Charles and Ray Eames since the early 1950s. In 1953, company founders Willi and Erika Fehlbaum discovered Eames' chairs in a New York shop window, after which they sought the production licenses from American manufacturer Herman Miller. After some negotiations, Vitra finally acquired the manufacturing rights to the Eames' furniture for and therefore also to the Wire Chair. Vitra was the only licensed manufacturer to start producing for Europe and Asia. The Fehlbaum's were also in close contact with Charles and Ray Eames personally, so the Eames archive went to Vitra after the death of the two designers - and not to Herman Miller. In addition to the Eames classics, the company also produces contemporary designer chairs and tables. In addition, Vitra maintains the Vitra Campus´in Weil am Rhein, where not only exhibitions on design and architecture are shown, but whose impressive architecture is regularly extended by through new buildings by leading architects. The DKR Checker is part of the world famous Eames Collection.

The 1951 designed DKR Wire Chair was originally produced by the American furniture manufacturer Herman Miller. After Erika and Willi Fehlbaum had acquired the production licenses of Eames' furniture for Vitra, production for Europe began in the 1950s. The Vitra Wire Chair DKR consists of a seat shell made of bent and welded steel wire and a four-leg base made of steel wire struts. The seat shell is optionally available without upholstery or with a seat cushion or with seat and back cushions made of Hopsak or leather. Because of the bipartite arrangement of the triangular cushions, the chair also became known as the Vitra Wire Chair Bikini. Like all Vitra furniture, the DKR Wire Chair is made only from high-quality materials and subjected to strict controls during production. Thus, the Eames DKR is characterized not only because of its perfect design, but also because of its stability by timelessness. This claim also forms a cornerstone of Vitra's corporate philosophy, whereby the inventory of furniture represents an important contribution to the sustainable use of resources over generations. A selection of Eames wire chairs in the dining area

In terms of contemporary history, the Eames furniture designs are related to the functionalism of post-war American modernism: in other words, Charles and Ray Eames developed clear, functional designs, such as the Plastic Chairs, which are tailored to the public's needs, and often arising from experimentation with advanced production methods and new materials. Above all else, the Vitra Wire Chair DKR has an aesthetic that is clearly reminiscent of the pop culture that developed in the 1950s. This pop culture brought decorative elements back into the foreground and increasingly addressed the aesthetics of an everyday, often banal and suddenly accessible world of goods. With the cool shiny steel wire and the "lascivious" padding that hints at the shape of a bikini, the Vitra Wire Chair Bikini stands for the decadent pop of the 1950s in America.