3% advance payment discount*: 684,58 € (Save 21,17 €)
* incl. VAT, incl. shipping (Austria, Belgium, Denmark, France, Germany, Luxembourg, Netherlands)
Like so many of the objects Arne Jacobsen designed for the SAS Hotel in Copenhagen, the AJ Table Lamp from 1960 has become a genuine design classic. Louis Poulsen produces the 56 cm high steel and die-cast zinc lamp in a range of colours. With the shade interior painted white, the lamp produces a diffuse light that is both targeted and non-glare. With the AJ Special Edition 2020 and the colours Pale rose, Original grey and Ultra blue Arne Jacobsen is honoured on the occasion of the 60th anniversary of the hotel opening. Amongst the principle representatives of Scandinavian design, and thereby a contemporary functionalist design, is without question the Dane Arne Jacobsen. Born on 11 February 1902 in Copenhagen Arne Jacobsen studied architecture at the Royal Danish Academy of Fine Arts. Although Jacobsen's career is mainly defined by his architectural works, including, for example, the SAS Royal Hotel Copenhagen, Christianeum Collleg Hamburg or St Catherine's College, Oxford it was and is his furniture designs for which he is most famous. Arne Jacobsen's most commercially successful furniture design is Series 7 Chair for Fritz Hansen; his most dramatic being the The Egg and The Swan, seating sculptures which are also manufactured by Fritz Hansen and which belong amongst the great design icons of the 20th century. As with the Louis Poulsen AJ table lamp lamps and AJ floor lamp The Egg and The Swan were designed for the SAS Royal Hotel in Copenhagen, a construction which on its opening in 1961 was the tallest building in Scandinavia and for which Arne Jacobsen designed all interior fixtures and fittings. Arne Jacobsen died on March 24, 1971in Copenhagen. A typical room in the SAS Royal Hotel in Copenhagen, including the AJ table lamp and wall lamp

With its minimal, but strong, design language the AJ table lamp is the very epitome of Scandinavian design. Arne Jacobsen, one of the forefathers of the Scandinavian designs, designed the lamp in the 1960 as part of one of his greatest projects, the SAS Royal Hotel in Copenhagen. While the high-rise architecture of the hotel was greeted with controversy, his furniture designs, for the SAS Royal, including chairs such as The Swan and The Egg were greeted with popular enthusiasm and have since taken their place in the annals of furniture history. As have the AJ lamp family. The Arne Jacobsen lamps are characterized by an extremely delicate shape; the lampshade sits on a narrow bar, which leads to the base. The recess in base was, allegedly, originally intended to serve as a mount for ashtray: does however correspond formally to the cylindrical, wide-open shade and thus effortlessly contributes to the design. In addition the Arne Jacobsen lamp is so constructed that it emits direct, glare-free light. The AJ Table Lamp is,as with all Arne Jacobsen lamps, distributed by Louis Poulsen, and to mark its 50th anniversary Louis Poulsen AJ lamp released the lamp in in five new colours. Arne Jacobsen designed the Louis Poulsen lighting as a set with the AJ Standing Lamp as well as various wall and ceiling lights. Created as they were after the Second World War Arne Jacobsen lamps and other designs fit into functionalism. Developed at the end of the 19th century - largely in connection with the ideology of "form follows function" - the heyday of functionalism as an architectural and design theory was the 1920s when it served as a guiding principle in, for example, the Bauhaus, Russian Constructivism and Dutch De Stijl movements. In the 1950s and 60s, functional principles were applied almost universally in architecture and design - not least because, there were economic benefits from large scale, machine production. Arne Jacobsen's designs can largely be understood in the tradition of Ludwig Mies van der Rohe and Le Corbusier: albeit in combination with a more organic, warmer form language which reflects the historic Scandinavian traditions. Whereas today the once ubiquitous AJ lamps can only be found in one room of the Copenhagen SAS Royal Hotel Copenhagen, their inclusion in the Louis Poulsen lighting range mean the iconic AJ lamps are available as domestic, commercial and office lighting for all.

Based in Copenhagen, Denmark Louis Poulsen is a major international manufacturer of lamps. In addition to Arne Jacobsen's AJ series Louis Poulsen also produce classic lighting designs by the likes of Poul Henningsen and Verner Panton, but also modern design classics such as the LC shutter or Enigma. The history Louis Poulsen goes back to the year 1874. Founded by Ludvig R. Poulsen as a wine import company under the name "Kjøbenhavns direkte Vin-Import-Kompagni", the company finally arrived, via some detours, at lighting manufacture in the 1920s. Today, in addition to the production and global distribution of its lamps, Louis Poulsen are international experts in context of outdoor lighting projects. More about 'AJ Table Lamp' in our blog 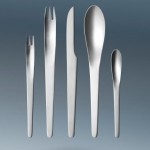 In 1956 Arne Jacobsen was commissioned to create the SAS Royal Hotel in Copenhagen; a contract he took on with great gusto and which, true to his understanding of an architect being responsible for the complete composition, saw him not only create a building,...