3% advance payment discount*: 2.725,70 € (Save 84,30 €)
* incl. VAT, incl. shipping (Austria, Belgium, Denmark, France, Germany, Luxembourg, Netherlands)
The Vitra chair EA 124 is part of the Eames Aluminium Chair collection produced by Vitra and characterised, as are all Eames furniture designs, by the intelligent combination of materials and from. Side panels, clamping brackets, frame and base are made of die-cast aluminium over which a leather or Hopsack seat is stretched. The high backrest with cushion provides, in conjunction with an adjustable back tilt mechanism, for genuinely excellent seating comfort.

With their work Charles and Ray Eames set themselves new challenges. They, for example, experimented with new materials or developed special manufacturing processes, such as for the moulded plywood chairs. For the Vitra aluminium chairs, a collection which arose in context of an Eero Saarinen commission for a private house in Columbus, they utilised for the first time. In addition, with the aluminium chairs Charles and Ray Eames moved, for the first time, away from the concept of the seat shell. Instead of a one-piece seat shell formed by seat and back, the EA 124 consists of a piece of textile or leather which is held taut but resiliently between two aluminium braces. Thus, the seat and backrest of the Vitra EA 124 can, without extensive upholstery, adapt to the sitter. In addition, the brackets are formed in shape of the spine, which further enhances the comfort. With the Vitra aluminium chair collection, the Eames created a family of high-quality chairs which today are primarily used as representative office and conference chairs. With a large range of possible covers the Eames aluminium chairs are also perfect for the living area and the Eames EA 124, with its high back and a cushion at head height is a classic lounge chair. The paths of Charles and Ray Eames crossed in 1940 at Cranbrook University. Charles Eames, then in his early 30, and his friend Eero Saarinen, who was later to commission the Vitra aluminium chair from Charles and Ray Eames in order years later, were at that time to preparing for the New York Museum of Modern Art's "Low Cost Furniture" competition. Ray Kaiser was appointed their assistant. Within a year Ray and Charles married and also began their cooperation as designers with establishment of the Eames Studio in Los Angeles. In terms of the division of labour their is a general acceptance that Charles Eames was chiefly responsible for the technical and Ray Eames, due to her artistic background for the aesthetic. The highly creative and productive cooperation between the two resulted, in addition to furniture design, to an extensive portfolio of toy designs, films, textiles, photographs and exhibition designs. Charles Eames' died in 1978, Ray died to the day 10 years later. Originally, the Eames aluminium chairs were designed for outdoor use and covered with artificial leather.

Since 1957 the production of the Eames aluminium chairs in Europe has been the responsibility of the Swiss furniture manufacturer Vitra when Erika and Willi Fehlbaum began with the production of many Eames designs; then as now Vitra are only licensed manufacturer of Herman Miller furniture, including that of Charles and Ray Eames, in Europe. Between Vitra and the Eames there always existed a special bond which expressed itself as a friendly relationship between Eames and the Fehlbaum. Thus Vitra is now in possession of a large part of the Eames estate a legacy the use as the basis for exhibitions and books about the design pair. The seating designs of Charles and Ray Eames, including the EA 124 and the other aluminium chairs are among Vitra's most successful products. Since the 1950s the Swiss company Vitra have produced the Eames Aluminium Chairs as the exclusive licensed producer in Europe . And to this day have changed nothing fundamental on the basic design of the EA 124 - side profiles, brackets, frame and base are made from chromed or polished die cast aluminium, the covers are however no longer the artificial leather "Koroseal" or "Naugahide", but rather from the fabric "Hopsak" or genuine leather. Vitra's long experience in the production of the Eames aluminium chair family combined with the unique quality and durability of product enables the manufacturer to offer a 30-year warranty on all static elements. An unrivalled guarantee of quality: both of construction and design. With their functional and minimalist designs Charles and Ray Eames are regarded as the pioneers of mid-century America modernism. For their designs they regularly searched for simple solutions that would meet the new requirements and opportunities of the postwar period: rising prosperity and the appearance of of popular culture created a demand for well designed products that were affordable and desirable to and for a large cross section of Americans. In order to meet such demands Charles and Ray Eames consciously choose to use materials suitable for industrial mass production, thus we we have, for example, the Eames plastic chairs and the Vitra aluminium chair collections. In addition with works such as the aluminium chairs Charles and Ray Eames designed chairs which were based on a series design principle and around identical elements: thus offering the producer a great deal of flexibility in terms of exactly which model was produced on which day and in what volume. Older readers will remember how last year one of the Vitra Senior Manager's quoted from this blog in his pre-fair pep talk to the assembled Team Vitra. Having reached the zenith of our careers we contemplated retiring. Fortunately we didn't. For at Milan 2014...

Until April 9th the Wasserschloss Klaffenbach Chemnitz is presenting the exhibition Eames by Vitra. As we wrote in our initial post, Eames by Vitra presents a complete overview of the Charles and Ray Eames chair canon complemented by texts, photos and videos... 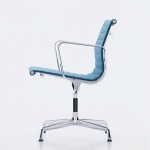 youtube contains a lot more than trampolining bears, illegal music videos and "ooh so clever" advertising virals. It can also be useful and informative. Honest. Among the youtube channels we like - and one of the few we actively follow - is that from... 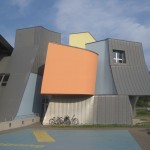 Following the successful visit to USM Haller the (smow)team headed on to Basel and Vitra HQ. The contrast in the external appearances of the buildings could hardly be greater. As a company Vitra don't just engage designers to create furniture for them, they... 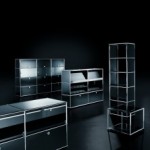 In a recent article wired magazine presented their own take on the evolution of office furnishing. From the introduction of the vast, cattle-shed like offices that characterised early office design through the cubicles and "virtual offices" of the 1980s and... 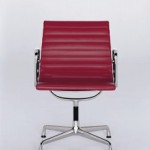 ...The chairs in the so-called "Aluminium Group" from Vitra are highly versatile and are just as applicable for use in an office environment as in waiting rooms and in private houses... The principle optical charm of the Aluminium Group is the simple, transparent design of the chairs that doesn’t try to conceal the frame, rather incorporates it in the whole...