3% advance payment discount*: 493,73 € (Save 15,27 €)
* incl. VAT, incl. shipping (Austria, Belgium, Denmark, France, Germany, Luxembourg, Netherlands)
The WG 24 from manufacturer Tecnolumen is a classic of Bauhaus designs. The number 24 stands for the year 1924 in which Wilhelm Wagenfeld first realised his reduced design. Today Tecnolumen are the only authorized producer of the copyrighted design. The Tecnolumen re-edition of the popular icon both captures the spirit of the age and with its dome-shaped lamp head emits a very pleasant, diffuse, light into any room.

DELIVERY INFORMATION: Due to ongoing delivery bottlenecks for individual components for the Wagenfeld luminaires, the stated delivery times are to be regarded as rough guide values. In the event of an order, we will keep you up to date at all times and inform you of any news regarding the delivery status.

How do I recognise an original Wagenfeld lamp?

Each lamp is numbered consecutively and carries the Bauhaus and Tecnolumen logo.

What is the difference between the Wagenfeld Lamps? The Wagenfeld or Bauhaus lamps, as they are also known, are currently produced in four different designs: all of which share the dome-shaped lamp head made of opal lined glass, and which produces the typical diffuse and comfortable light for which all versions of the Tecnolumen table lamp are known. Presenting a form that is as characteristic as it is unique, in addition to the WG 24 Tecnolumen also produce the WA 24 which in contrast to the glass base of the WG 24 features a metal base, the WA 23 SW with a black painted base and the WG 25 GL with a glass base. The peculiarity of the Wagenfeld Lamp WG 24 is in its construction. The base is, as with the WG 25 GL made of glass, but with the WG 24 so is the supporting leg made of transparent glass: a feature which gives it a light, transparent look. The visible cable meanwhile underscores the industrial character of the light. According to Wilhelm Wagenfeld, the works of Bauhaus should be industrial products and also look like such. However, the WG 24 was manufactured by hand. The unmistakable design enjoys today great popularity worldwide and is therefore often copied and forged. As your guarantee of authenticity every Tecnolumen Wagenfeld lamp is consecutively numbered, and is embossed with the Bauhaus logo on the bottom of each lamp. Wilhelm Wagenfeld was born in 1900 in Bremen as the first of three children and discovered quite early his creative passion and technical understanding. After training as an industrial draughtsman he produced his first graphic works, works which reflect his growing enthusiasm for the literature and art of Expressionism. At the age of 24, he arrived at the Bauhaus in Weimar, where he trained as a silversmith under the direction of László Moholy-Nagy. In this period arose, in addition to the now famous Bauhaus lamp, also various metal objects, works always created with the aim to industrial manufacture. According to Wagenfeld that which should distinguish and define Bauhaus works is that they should be serially producible and possess an unmissable industrial charm. Through his successful work in various manufacturing companies Wilhelm Wagenfeld quickly gained important experience, experience which in later years served as the basis of several patented processes for mass production he developed. In the 1950s Wilhelm Wagenfeld established his workshop from where he designed commissioned works for renowned clients such as WMF, Braun or Rosenthal. He always remaining true to his principle of combining contemporary functionality with timeless design. In addition Wagenfeld held numerous professorships, including positions at the State Art School and the Academy of Fine Arts in Berlin. As popular today as ever the works of Wilhelm Wagenfeld's have been presented in numerous exhibitions, are held in all important museums' permanent collections and have received numerous international awards. The table lamp WG 24 from Tecnolumen

The Wagenfeld lamp was designed in the early 1920s in the metal workshop at Bauhaus Weimar. László Moholy-Nagy, who had just been newly appointed as Meister, reorganized the workshop and asked the young Wilhelm Wagenfeld to create a table lamp. Under the leadership of Walter Gropius, the new orientation of the Bauhaus became increasingly focussed on the creation of mass market products, products which were to be produced industrially and which thanks to the utilisation of new materials remained true to the artistic demands of Johannes Itten. At the first Bauhaus exhibition, at which the lamp was shown, it was constructed almost entirely of glass, just like today's WG 24. Only a year later the version with the metal base was presented by Wilhelm Wagenfeld. However, the commercialization of the lamp took a long time: the reason being the complex production with various individual components. Only in 1980 with the Tecnolumen re-edition, a re-edition authorised and certified by Wagenfeld, was it finally possible to produce the WG 24 economically in larger quantities.

At the time of the creation of the Bauhaus lamp in 1924, Germany was at a crossroads: politically, economically, culturally and socially. After the First World War, the economic situation was particularly devastating, a situation reflected in the rapidly rising inflation which reached its peak in 1923. With the subsequent introduction of Rentenmark and the resulting upswing in the industry and commercial landscape, social conditions also improved noticeably. The golden twenties were a time of celebration and rethinking, especially in the fields of art, culture and science. One reflection of which was the establishment of Bauhaus and the rise of classical modernism. After a political change of direction in Thuringen in 1924, Bauhaus Weimar was forced to move to Dessau. the location change, the values ??remained the same. The artists and architects, including Wilhelm Wagenfeld, were anxious to reconnect art and craftsmanship, especially in context of design and industrial production process: the Wagenfeld WG 24 lamp reflects this combining a high artistic ambition with innovative materials and advanced technology. Many Bauhaus classics are still produced today in large numbers and sold successfully.

The German manufacturer Tecnolumen was essentially founded to produce the Bauhaus lamp by Wilhelm Wagenfeld. It was the first product of the Bremen based company, which began production of the WA 24 in 1979. Since the successful launch of the Wagenfeld Lamp Tecnolumen have expanded their portfolio to includes lamps by other Bauhaus luminaries including Gyula Pap and Josef Albers, as well as non-Bauhaus designers such as Mart Stam and Egon Eiermann and contemporary design talents. As a manufacturer Tecnolumen has always strived to create durable articles characterized by sustainability and high quality, something the achieve through a combination of working with high-quality suppliers and combing their decades of experience with the latest lighting and electrical technology. 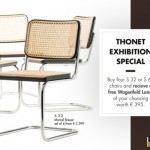 ...For by way of celebrating the Sitting – Lying – Swinging, an exhibition on "home turf" as it were, (smow) have teamed up with Thonet and Bremen based manufacturer Tecnolumen to organise an exhibition special offer: Purchase four Thonet S 32 or S 64 chairs and receive a free Tecnolumen Wilhelm Wagenfeld WA 23 SW, WA 24, WG 24 or WG 25 GL lamp... 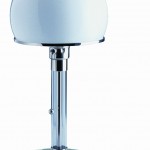 ...With over 100 members of the public getting in touch and 59 fake Wilhelm Wagenfeld WG 24 lamps being exchanged for licensed originals, Bremen based manufacturer Tecnolumen have declared themselves very satisfied with their recent "No Fake" promotion...

...One of the most commonly copied Bauhaus era products is the WG 24, one of the so-called Bauhaus Lamps by Wilhelm Wagenfeld... A piece that fits perfectly into the categories "instantly recognisable" and "much sought-after" And so as part of a campaign to highlight the problem of fake furniture design classics, the Bremen based producer, and sole licence holder and so sole authorised producer of the Wilhelm Wagenfeld Bauhaus Lamps, Tecnolumen are offering to exchange your unauthorised WG 24 copy for the real thing...