Overview of the Vitra Campus in Weil am Rhein

Beginning with Frank Gehry's Vitra Design Museum in 1989 the Vitra Campus has developed over the decades into an architectural masterpiece in its own right. Presenting constructions by some of the world's leading architects, every building on the Vitra campus stands on its own and represents its own history, background and architecture philosophy. Several times a days guided tours lead interested visitors through the campus: one learns which Japanese motifs were incorporated into the architecture of the Conference Pavilion by Tadao Ando, experiences in Zaha Hadid's Fire Station a building which benefits from an alternative utilisation of statics - thus opening up the park to all, regardless of architectural training. Also located on the Vitra Campus one fins, for example, the famous gas station by Jean Prouvé, a bus stop by Jasper Morrison and then there are the "Balancing Tools" by Claes Oldenburg and Coosje van Bruggen, a gate-like sculpture consisting of an oversized screwdriver, a hammer and pair of pliers and which was a gift to Willi Fehlbaum from his sons. In addition, in the VitraHaus one can view the Vitra Home Collection with the innumerate classic designer Vitra chairs, lounge chairs and tables which comprise the Vitra portfolio.

The Vitra Campus at a glance: 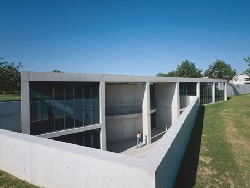 Conference Pavilion by Tadao Ando on the Vitra Campus in Weil am Rhein.

It was the cherry blossom on the Vitra Campus which ultimately persuaded Tadao Ando to create his first building outside Japan: the Conference Pavilion. Those visiting the Vitra Campus in April will understand, all others will have to imagine this singularly Japanese construction in a singularly Japanese landscape. Designed as both a conference centre and a space of silence and concentration, a narrow path leads into a Japanese monastery garden an onto the building, a work which one must enter alone in order to fully reflect and find to inner calm. A respectfully thought through construction the Conference pavilion by Tadao Ando is a perfcet example of architecture in harmony with man and his environment. 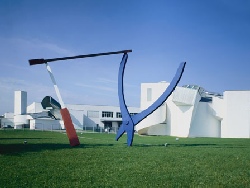 Balancing Tools by Claes Oldenburg and Coosje van Bruggen on the Vitra Campus in Weil am Rhein.

Among all the artful objects and unique Vitra designer furniture on the Vitra Campus in Weil am Rhein one object in particular stands out: the sculpture "Balancing Tools" by Claes Oldenburg and Coosje van Bruggen presents the principle tools of an upholsterer - screwdriver, hammer and pliers, in oversized and simplified representation in primary colours. The balancing tools were a gift to Willi Fehlbaum to mark his its 70th birthday and allude to a dialogue between art and craft as it occurs in the design process. 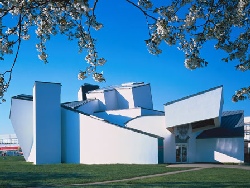 Vitra Design Museum by Frank Gehry on the Vitra Campus in Weil am Rhein.

The background to the construction of the Vitra Design Museum was Rolf Fehlbaum's desire to document the history Vitra. The commission for the new museum building was given to the Canadian architect Frank Gehry. Hitherto primarily known for his postmodernist constructions the Vitra Design Museum was not only Gehry's first building in Europe, but with its novel geometry and form language helped develop the concept of deconstructionism. The white geometric building with its swooping organic curves has also gone on to become one of the best recognised examples of contemporary architecture and stands a s symbolic for the whole Vitra Campus. The Vitra Design Museum was opened on November 3rd 1989 and since then has staged award-winning exhibitions devoted to contemporary art, design and architecture. 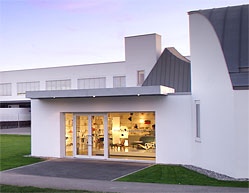 Vitra Design Museum Gallery by Frank Gehry on the Vitra Campus in Weil am Rhein. 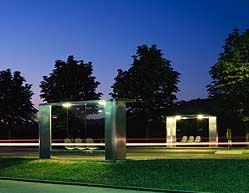 Bus stop by Jasper Morrison on the Vitra Campus in Weil am Rhein.

Even the bus stop on the Vitra Campus has a genuine artistic value. The generally thoroughly pragmatic, often uncomfortable and rarely respectable location has been helped by Jasper Morrison to an unexpected splendour. When asked to create a bus shelter the British designer furniture approached the task with the same vigour as all his projects and the result is an object which perfectly embodies contemporary notions of aesthetics. The Vitra bus stop is thus an expression of Morrison's design understanding and that design is less defined by its form as its use and that its designer need not be visible in the end object. In addition to the bus shelter Jasper Morrison has also designed many chairs for Vitra. 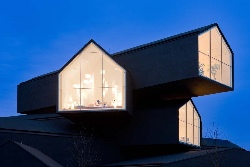 The Vitra flagship store and crowning jewel of the Vitra Campus is the VitraHaus. Designed by Basel based architects Herzog & de Meuron the unique architecture, consisting of 12 extended gabled houses, which are stacked to create a five-storey building and which has attracted many visitors. A controversy. Particularly criticized is the anthracite walls of the building, walls which are broken only by the large windows at the front sides, and thus in the opinion of many means the VitraHaus doesn't insert comfortably into the surrounding countryside. For others the dark walls ensure that at night the large illuminated windows create the impression of a structure floating in the environment and thus creates a unique, almost magical impression. Architecture is always a matter of taste. Something the Vitra Campus beautifully reminds us. In the VitraHaus the Vitra collection is presented with including the full range of chairs, sofas, tables, designer lamps and accessories in a series of constantly changing exhibitions. 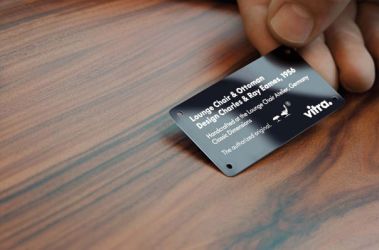 The Vitra Lounge Chair Atelier allows a rare insight into the high craftsmanship involved in the endearing Vitra classic. Located on the Vitra Campus, the Lounge Chair Atelier is an open workshop where you can experience how the popular Eames Lounge Chair is constructed. Those who have previously opted in the VitraHaus for the purchase of such an Eames Chair, can subsequently watch as their own personal unique chair is built with love and expertise. Visitors can not only look over the shoulders workshop staff but also learns about the history and craftsmanship of this classic by Charles and Ray Eames. 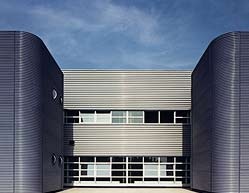 Making efficient use of prefabricated components Nicholas Grimshaw's factory building for Vitra on the Vitra Campus in Weil am Rhein was completed in just six months. Featuring a corrugated façade constructed from sheet aluminium the composition exposes its industrial and technical background. A few years after completion of the factory building Grimshaw completed a second building which in addition to housing production facilities also host the so-called Citizen Office, a large office, furnished according to the latest Vitra standards by designer Sevil Peach. 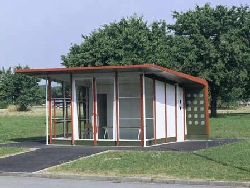 Some 50 years after Jean Prouvé designed a petrol station concept for the company Mobiloil Socony-Vacuum, the work of the French engineer, architect and designer arrived in 2003 on the Vitra Campus - as one of the last three surviving examples of the commission. With its metal structure the Prouvé petrol station is highly reminiscent of Prouvé's furniture designs: not just in terms of statics and forms but also in terms of the colours and the physical separation of structure and surfaces the Petrol Station is highly reminiscent of Prouvé classics such as the Vitra "Standard" chair or the Vitra "EM Table". 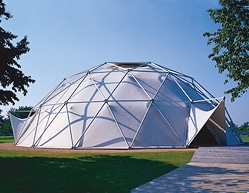 Dome by Richard Buckminster Fuller and T. C. Howard on the Vitra Campus in Weil am Rhein.

The Dome on the Vitra Campus owes its origins to the experimental design work of the American architect Richard Buckminster Fuller. One of Buckminster Fuller's most famous works is the biosphere at the World Expo 1967 in Montreal. The Dome in Weil am Rhein was realised in 1975 by Buckminster Fuller's friend and engineer Thomas C. Howard and represents a light geodesic dome. Vitra uses the dome for various events. 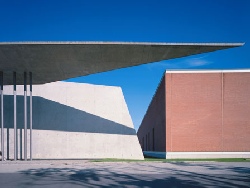 In itself innocuous at first glance the production hall by Alvaro Siza, appears to offer little of the eccentricity of the other buildings on the Vitra Campus, such as the VitraHaus or the Vitra Design Museum. And there in is its char and interest. The brick hall is highly reminiscent of the anonymous factory building of the 19th century; however, the contemporary sophistication of the building is manifest in the bridge construction attached to the roof structure. The curved object is mounted so high that the view of Zaha Hadid's fire station remains free; however, when it rains the device lowers automatically and thus provides a rain-free connection between the Siza factory building and the Grimshaw factory building. 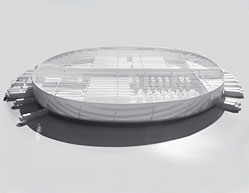 The newest building on the Vitra Campus is the factory building by Japanese architectural firm SANAA. Comprising Kazuyo Sejima and Ryue Nishizawa, SANAA received the coveted Pritzker Prize 2010, an honour they share with many of their neighbours on the Vitra Campus including Frank Gehry, Tadao Ando, Zaha Hadid and Herzog & de Meuron. The round factory building dwas completed in 2012 and with its reduced shape and monochrome façade is characteristic of the work of Sejima and Nishizawa, a partnership who deal in their works with the theme room flow, light, transparency and materiality. 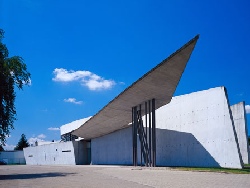 Fire Station by Zaha Hadid on the Vitra Campus in Weil am Rhein.

As a result of a major fire in 1981 which largely destroyed the production facilities, Vitra resolved in to build their own fire station. The construction was realised by Iraqi architect Zaha Hadid, her first individual construction. The Vitra Fire Station can be understood as sculpture because of its unique, almost disturbing architecture. The construction was cast in situ in concrete and appears as a frozen explosion, the rejection of standard conventions of architecture continuing on the inside of the building. The Pritzker Prize winner Zaha Hadid has thus created a key work of Deconstructivism. Today, the Fire Station is no longer used as such, but is used for exhibitions and functions.